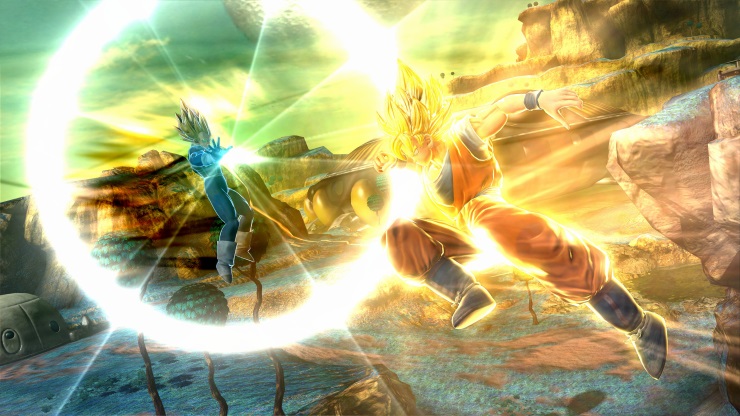 J-Stars Victory VS + is a larger than life, over the top, arena-battling, special move extravaganza that has finally reached us in the West after being out for over a year in Japan. The previous version was released on the PlayStation 3 and the Vita, while this will be the first to grace the PS4. The release also coincides with the 45th anniversary of the “Shonen JUMP” magazine and the 20th anniversary of the “V JUMP” magazine. For those uninitiated among us, the JUMP magazine brought us Jojo’s Bizarre Adventure, Dragonball Z, Naruto and Bleach. For those of us who love any of these series and characters, you’ve probably already got this penciled in to be added to your collection. After spending a reasonable amount of time with the likes of Yusuke and Gon and Yuffy, let’s just say at this point I’m still to be convinced of its magnificence.

The Developer, Spike Chunsoft, should be applauded for not just taking the opportunity for an easy cash grab. What you are promised from the beginning is a huge roster of characters to chose from, and that each of them will be bringing their own showcase special moves and frenetic energy to the table. There are a number of modes to keep you playing, too: the story mode itself gives you a choice of four different paths you can follow alone. The Motion Chapter focuses on Luffy, the Hope Chapter on Naruto, the Research Chapter on Toriko and the Pursuit Chapter on Ichigo. You spend your time navigating a three dimensional map using a sailing ship, visiting different areas and worlds that are all parts of the Jump Universe. This is so you can face other fighters and fulfill quests so you can build up your team, with the goal of winning the J-Battle Festival. The story is really just an excuse to show off the 39 playable characters and the 13 support characters available. Victory Road sets battles with very specific victory conditions in order to complete the round. Included in this version is the new Arcade mode which essentially gives you six battles to fight through, getting progressively tougher as you go. A Free Battle Mode gives you the options to play local multiplayer or online, which again offers a different experience from fighting the CPU opponents.

There are also options on the front screen to purchase additional characters as you earn enough “Jump Points” that you can use in the various non story modes on offer, this even includes the support characters that you play with as you go. You can also buy additional items for use during the story and trade in gold, silver and bronze coins for character cards.

Character cards are buffs that you can add to your chosen player. As you buy more cards you can place them in certain decks to organise them, which can then be rolled out as part of your character on the selection screen. This allows you to use certain strategies against tougher opponents as you go, though sometimes the buffs for cards are of the give and take variety, benefiting you in one area and not in another. It means that deck management becomes something you end up spending your time on to make sure that you are at your optimal game. The presentation is going to get the Jump fans amongst you grinning from ear to ear, with cut scenes and dialogue aplenty before every main fight that either sets the scene or moves the story forward in some way. It’s nothing different than you see in most JRPGs, with static pictures that change during the conversation and subtitles running along the bottom of the screen. It’s surprising that they didn’t just use the in-game engine for these scenes as it would have helped to maintain the immersion, especially since before every bout kicks off, they use the in-game engine on the character introductions. It’s a strange design decision that dates the game. While the fans will be whooping and cheering at all the in-jokes and obvious love that has gone into the trimmings surrounding the main feast, you’ll be forgiven for wondering if you are playing the PlayStation 3 version.

The three dimensional semi cel-shaded glory then erupts into a contained arena, with destructible scenery and one character under your control while the CPU controls everyone else. Support characters can be summoned to deal out additional damage when required and will need time to recharge after their offensive strikes. The action is frantic and breathless at times as you attempt to knock out the other team in order to fill in the victory bar. You have your bread and butter basic attacks to chip energy off your opponents, more powerful attacks that you can string to create impressive combos that will shatter buildings and slice apart giant peppers. Yes, you read that correctly. One of the levels will easily help you achieve your five a day. Continue to punish the other team enough and you will be given the chance to transform into a much more powerful version of yourself, but under a time limit. This allows you to unleash several burst attacks that will help to wipe out your enemies and can also turn the tables if you are struggling in the round. It’s a shame that you can end up struggling in a round through no particular fault of your own in a large number of the battles. The camera seems to have its own stamina bar because at times it seems to want to take a rest from the action, catching itself in a piece of scenery or leaning on your character for a breather. Which would be fine if you weren’t reliant on keeping an eye on the whole area around you. If it had been a bit higher and further away, it would have made things a whole lot easier to know exactly what was happening.

J-Stars really gives over to frustration when your defeats aren’t down to your own poor skills. Little acorn gripes become giant oaks of annoyance as it progresses. Blocking doesn’t always work when it comes to stopping a combo, and sometimes if you get caught in a double team, the only way out of the situation is to jump your way out. There doesn’t seem to be a way to easily counter and return fire. Even though you spend the majority of your time locked on to your opponent, your special attack can and will miss. J-Stars works better when you feel in control rather than button mashing and too many times, I was button mashing to save my butt. You can order your partner to adopt a strategy via the D-pad, but leave them alone at your own peril because if they go down, then it counts against you. Though don’t expect them to keep a look out for you, as they don’t seem to be the biggest team players. Sometimes, you’ll be having the perfect storm of a battle only to be alerted that your team mate has gone down. Other times, the opponents will hit the Burst attack impossibly early in the round, meaning you’re on the defensive until the attack runs out of time. Overall, the biggest letdown is that while every character has its own animations for the different levels of attacks, you don’t have to adopt a different strategy for the character you’re playing or for the character you’re facing. Imagine a ham sandwich with different garnishes. Each sandwich looks different but underneath it all, the core is the same. Spike Chunsoft dropped the ball by missing out including character bios to help encourage a new legion of fans.

The irony being that, through all its faults, J-Stars Victory VS + has an undeniable charm because of the obvious love of the source material. Taking part in all the mini side quests involving your ship and exploring the land is a decent break from the frantic battles, and the dialogue is often amusing in its own kitsch way. When the battles flow and Naruto is taking names and kicking ass then yeah, I can totally understand the love this game will get. However, for those who aren’t fans of the Jump universe, the flaws will probably dampen your enjoyment too much – and, to be fair, there are more accomplished fighting games out there.

So many characters for the fans.
Dialogue is fun.
Battles can work really sometimes.

Not the best looking.
Camera is a problem.
Mechanics aren't exciting.

The flaws will probably dampen your enjoyment too much – and, to be fair, there are more accomplished fighting games out there.