Tales from the Borderlands: Episode 3 – Catch a Ride Review 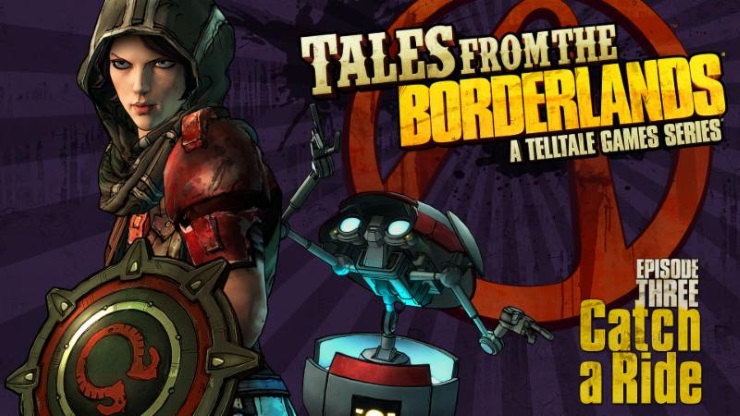 As is always the case, Telltale’s games are heavily focussed on story. As such, this review assumes you’ve played the first two episodes, but won’t spoil from this new one.

There’s not an enormous amount to say at this point, really. That’s not the way I’d like to open a review for an episode of a series I am so clearly enjoying, but I won’t ruin the story here, and Telltale games are all story (and I feel like we’re saying that in every review right now – on that note, we’re changing the way we review episodic games after the current run of them ends).

But the biggest problem Telltale face right now, is the fact it can’t put episodes of Tales from the Borderlands out on a regular basis. Episode two was released in March (with the first coming in November 2014, which means three episodes have taken seven months to produce and release), and it’s now late-June. Any good TV show leaves you desperate for the next episode, and Tales from the Borderlands is no exception. Episode two was no different, and if you ask anyone who played it, they’ll be so happy that Catch a Ride is here – at least until they start playing and can’t remember a single choice they made. Being nearly two hours long, each episode is more like a film, but one that doesn’t end and leaves you wondering what’s coming next. That only works if the episodes are delivered in a concise, timely manner, and while Game of Thrones is getting that treatment, Tales clearly isn’t – and that needs fixing right away, lest people get bored and wander away from what’s shaping up to be a truly special game series. With that altogether not-too-small gripe out of the way, what’s actually here is yet again thoroughly enjoyable. For most of the run time (just shy of two hours, for me) it’s a standard “mid-season” episode. There’s a lot of character interaction and development, and aside a few cases of hammering the “Q” button early on, there’s little interaction outside of dialogue choices.

But that’s not a gripe as such, the pace has been breakneck from the start, so having a more sedate middle episode gives the characters a chance to breathe. There are new characters introduced, and some reintroduced properly, and in fact there’s a real focus within Catch a Ride on female lead roles. Most of the more interesting characters are female, but Telltale doesn’t feel the need to focus on that, and there’s even a throwaway moment that, in many games, would be made a bigger deal of. Of course there’s more Loaderbot, too, and it’s clear that Telltale knows it’s onto a winner there.

Aside from the opening, which carries on exactly where episode two left off, it actually takes a while to get going, and the latter parts return to that speedy pacing. But overall, the script-work is top notch again, and, at the risk of repeating myself, it’s very clear the writers not only understand the characters and world, but they have respect for them and enjoy writing for them. Aside from Reese and Fiona, Sasha gets a lot more screen-time, here. That said, the jokes are a little on the light side compared to previous episodes, but there are still some amusing moments. Yet again, the voice work is top notch, and Fiona still remains my favourite character, thanks to the voice work and how expressive the art direction appears to be with her facial animation. When she rolls her eyes (which she does a fair bit), you’re doing it with her. An identifiable female lead, she’s slowly but surely become the star of Tales from the Borderlands.

The overarching story doesn’t actually move on to a great degree, though the through-line does appear to be becoming a little more clear. With only two episodes to go, Telltale has quite a lot to wrap up in a short space of time, but what it does do is leave you wanting more. Another cliffhanger, then (though less so than episode two), and another great episode of Tales from the Borderlands. Here’s hoping episode four is just around the corner.

A little slow in spots.
Not as funny as usual.
When will the next episode be?

Another great episode in what is becoming Telltale's best series. But the sporadic episode release is harming it overall.