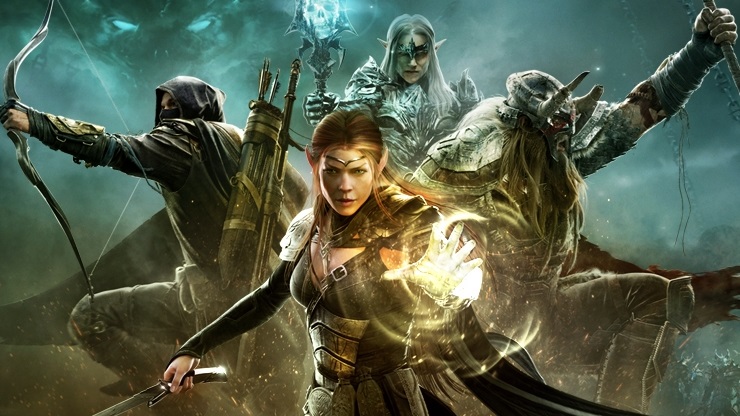 Sometimes, the greater our success, the heavier the rod we carve for our own backs, an adage by now known well to Bethesda. Having created Fallout 3 and Skyrim, two of the greatest RPGs ever made, they challenged themselves to give their fans what they – and the fans themselves – believed they wanted, an MMORPG set in Tamriel, the world of the Elder Scrolls.

It seemed like a no-brainer. One of the most common forum topics about Skyrim was that people actively noticed the absence of other players, like somehow Tamriel would be a better place if you could sally forth together. It’s a misconception you can’t blame them for, in a way. Such a diverse line-up of races, the free class system, the enormous open world – all seem to lend themselves to the MMO template. Unfortunately, in adding any kind of social or multiplayer aspect to this universe, Bethesda have actually sidelined the very essence of what made Skyrim so good: the sense of purpose.

No longer are you the lone badass out to save the world. You are not the Dragonborn, feared and revered by all – and no matter how many times various NPCs reiterate that you’re special, you don’t feel special anymore. As the Dragonborn, you strode the land and laid claim to all you surveyed. When you found an old mine or cave or little village, full of possibilities, you always had the sense that YOU had discovered it. It somehow belonged to you and you alone. The Elder Scrolls Online: Tamriel Unlimited loses that aspect. Everywhere you reach is already plundered, often by the Benny Hill-style line of players charging out of the place to which you’re boldly marching. The mechanics may feel very “Skyrim”, but the grandeur is lost. That being said, TESO is still an enjoyable MMO, and certainly at least as good as any other available on current consoles, perhaps with the exception of Final Fantasy XIV. It’s not as glitchy or as juddery as Neverwinter, not as disconnected or frenetic as DC Universe Online. The problem is, of course, that those other games are free-to-play, so we expect Tamriel Unlimited to be better.

It all begins with a by-now trademark Elder Scrolls prison break, which this time sees you escaping the Daedric underworld along with a mysterious benefactor and the Prophet, otherwise known as the “Exposition Guy”. It’s a simple, immediately familiar set-up, and one that serves as a decent tutorial into the social, combat and exploration elements. Once again you’ve nine races to choose from, but now you must choose from four classes, which are given imaginative names like Dragon Knight and Templar, but which boil down to the classic RPG archetypes of Fighter, Mage, Cleric, etc. This being an Elder Scrolls game, however, means that there’s no shortage of skills and abilities to unlock and equip as you progress, allowing you to diversify your character to an impressive extent.

Character customisation is deep and robust, and the ability to level up fighting styles just by using them means you can still shape your Vestige in any way you choose as you play. For example, I created a Redguard rogue and outfitted her with a bow and twin daggers. As I slowly gained prowess in both, as well as in her class, she unlocked more and more mappable attacks and skills. By the time I reached level 15 and unlocked the second weapon set, allowing me to switch between the two styles instantly, I felt like I – and my avatar – had earned the right to do so. Further character development comes in the form of the Factions. The Ebonhart Pact, the Aldmeri Dominion and the Daggerfall Alliance are warring factions that have been tearing each other apart for years. Whichever one you affiliate yourself with at character creation locks the others off, and also determines your starting city and opening quests. At level 10, you can book passage to Cyrodiil and join in the war effort, helping out your faction by jumping into PvP. The decision to make PvP separate from the campaign was both brave and smart, as you can enjoy the entire game solo if you choose, only dipping into multiplayer when you want to, either to engage in PvP or team up for the tough and rewarding group instances. The important thing here is that you can play the entire game alone if that’s your style, and will only need to work with or against other players in activities that make such prerequisites clear.

As is by now standard, you can choose to join guilds and complete quests to rise through their ranks. No mater where you begin the game, these quests don’t change beyond the locations, but it’s still another handful of paths to follow. The quests are rarely any more enjoyable than the campaign, but the rewards can benefit your specific class, which is worth the time. A microtransaction element exists, whereby you can purchase “Crowns” with real money. What you then purchase with Crowns is mostly either cosmetic, or variations on stuff you can unlock later. For example, I bought myself a mount early, and spent what I had left on a black Labrador. I didn’t have to; the game doesn’t force the transactions upon you, and you can find mounts and pets later in the game, but I chose to do it right away because mounts are awesome. Bethesda have deliberately left as much as they possibly can up to player choice.

The bulk of your time will be spent questing, quite obviously, but this suffers in the same way as Skyrim did. Those who put as much time into that game as I did will know that the questing in Skyrim was almost an aside. The pleasure was found in exploration, in the emergent moments, scaling that mountain for no reason, building a house, wiping out an entire fishing village because the innkeeper wasn’t selling the alchemy ingredient you were looking for. Tamriel Unlimited has a similar issue with repetitious fetch or kill quests, but here you can’t so readily alleviate the boredom with random slaughter or putting pots on people’s heads.

It’s hard to get excited about a quest that two hundred other people are currently running, and it’s hard to feel thrilled about traveling to a map marker, killing everything, and then traveling back over and over. The map is also a little unfriendly, and the fast travel system relies on finding set wayshrines, when there’s not really any need to remove the standard “go anywhere” travel of previous Bethesda RPGs. Luckily, there’s a huge crafting and foraging system in place that encompasses blacksmithing, leatherworking, cooking, alchemy, woodworking and enchanting. After running through the tutorial missions for each craft, you can either specialise in one or dabble in all, fulfilling “writs” found on noticeboards in the cities to facilitate other players. It’s an interesting take on what could have simply been a dull “will craft for mats” system, and it’s way better than just shoving an auction house into the world.

Also similar to Skyrim is the combat. While it’s not as refined as the last game’s left hand, right hand set-up, you can still switch between first and third person viewpoints at will. Holding the right trigger will attack, while your skills are mapped to the face buttons. Combat feels a little hit and miss, with ice-skatey physics and pesky other players charging in and robbing your glory, but it’s satisfying enough in the moment, and very rarely difficult if you stay within your level range. A handy system exists to select a quest by hitting right on the D-Pad at any time, allowing you to easily cycle through your colour coded quest log. Having spent many hours with three characters of different genders, races, classes and factions, it’s fair to say that Tamriel Unlimited does its best to give you choices and varying experiences. It doesn’t always get it right, and there are long moments when you’re simply going through the motions and ticking off quests that it can feel tedious and empty – but that can be said of almost any MMORPG. Tamriel Unlimited goes some way to making up for it by giving you lots to do if you choose to look for it. Go fishing or hunting, spend a few days idly crafting; pick some flowers, go for a ride, join in the war. I’m too busy coasting through quests and earning a living as a leather-worker to be too concerned, but it’s testament to the game that I certainly didn’t feel the urge to rush through to the level cap.

Ultimately, the console version offers the same game as previously released on PC, but with all the extras added since and a completely overhauled interface. The multitude of tweaks and improvements elevate it above the underperforming PC version, and fans of the Elder Scrolls series will lap it up. It’s not The Elder Scrolls VI, unfortunately, but it’s a decent enough stop-gap if you’re craving more Tamrielic adventure in your life. As an RPG it’s solid but uninspired, as an MMO it’s big and involving but a little dull and empty. As the two combined, it’s an epic adventure hamstrung by the inclusion of other people, lacklustre quest design and a sense that you’re just a little cog in a great big machine that would happily spin on if you simply fell out of it. Something so vast and ambitious was always going to struggle to tick all the boxes, but Tamriel Unlimited does the best it can as a predominantly single player game within an MMO framework. For some, that alone will be more than enough.

Bethesda have taken the grandiose essence of The Elder Scrolls and diluted it into an MMORPG with some success, but there's still a way to go to fully realise that ambition.

You may also like
bethesdaThe Elder Scrolls Online: Tamriel UnlimitedPC