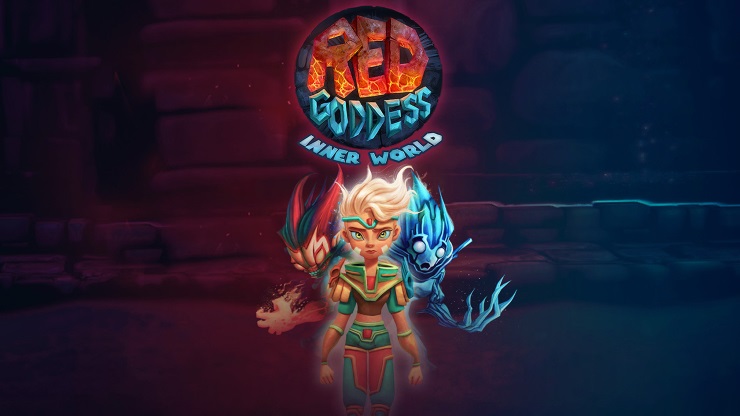 In Red Goddess: Inner World, you play as Divine, the daughter of the Gods who created the world, but is then lost to time and space after the world ends. She awakes without her memories in a place which she “knows very well but has never visited”. Basically, she finds herself in the world she created in her head, her “inner world”, if you will.

So the core objective of Red Goddess is for Divine to reclaim her memory. To do so, you must navigate the pretty world in search of pink, glistening crystals. These allow you to open portals to other parts of the world, where you’ll eventually stumble across an object that drip feeds a section of her memory to her. With each memory returns a new power. And while I do believe Red Goddess contains some good ideas, it’s just poorly executed and, sadly, rather boring to play.

There are moments that genuinely infuriate, for example: the flashbacks of Divine’s memory are ridiculous. In two of them it shows the death of both her parents, supposed gods who created the entire world, easily killed by one swipe from enemies that you will later go on to defeat yourself with little trouble. All the while Divine just stands there doing nothing, watching on as her mum and dad are slain. Sure, that’s a spoiler, but it also highlights an absurd inconsistency that stands out like a sore thumb. The platforming is as far away from tight and responsive as you could possibly imagine, too. With hardly any variation in the slightest, you have to jump really slowly from platform to platform, with the mildest and most pointless of obstacles put in your path, which feel simply like a way to make the game longer. When I attempted to jump on some platforms, I often ending up slipping off; as Divine would just clip through the edge, or inexplicably slip off it and plummet downwards, either back to the beginning or landing on a load of spikes which, due to the way she flies about 15-feet into the air upon taking any damage and then takes a good three seconds or so to get back up, can often mean certain death.

But the main problem with the platforming, despite it running horribly, is that there is just no variation. Take Guacamelee (a game which I believe has very much inspired Red Goddess), that title constantly changes the way in which you traverse the world, where as this does not.

“So” I hear you say, “the platforming isn’t good, but what about the combat?” Sadly it’s also tiresome and rather boring, is my reply. Divine can take three forms in the game: her normal self, Rage form (red), and Fear form (blue). She can also wield fireballs, use telekinesis and other such skills. Sounds interesting, but in reality, it’s just dull. There is no need for both the Rage and Fear forms to exist, as they both do exactly the same thing, which is uninspiring: punch an enemy in the gut until it explodes into flames. There’s literally only a blue and a red form so there can be corresponding enemies that can only be defeated when you’re the matching colour. The enemies (ghosts) present no challenge; all you have to do is walk up to them and press square four times and they will die. The only time it gets more difficult is when there is a cluster of different coloured enemies throwing fireballs at you. Due to Red Goddess’ slow speed and the aforementioned way in which Divine handles damage, this makes it all more difficult. But it isn’t enjoyable difficulty; it just frustrates.

Even the fights against the big golems, which are built as grand boss battles, don’t satisfy. The golems move with the vigour of a man being dragged around the underwear section in Marks and Spencer’s, and you merely have to roll away before they smash their fists down, then punch wherever the purple thing is sticking out. Although it’s commendable that Yanim have fixed the frame-rate issues with a patch, the game sadly remains an uninspiring one, that’s hard to recommend.

A platformer that has some interesting ideas, but is poorly executed, thus just not very fun to play at all.