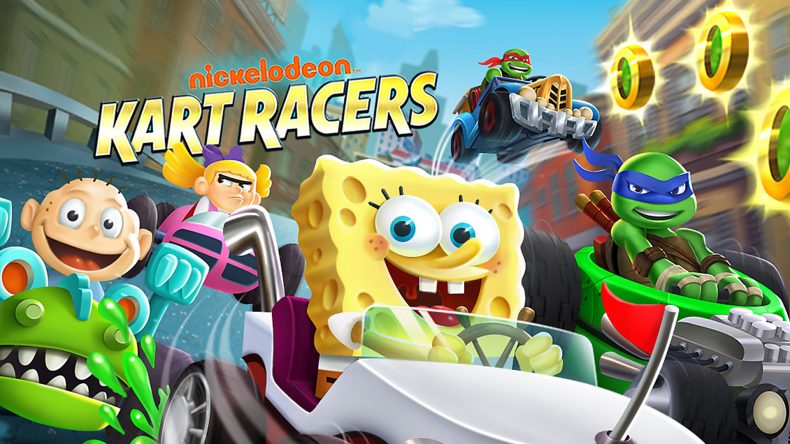 There’s an overbearing sense of inevitability when you’re reviewing a karting game. How long before Mario Kart gets mentioned, and put on a pedestal for comparison? And whilst it might seem like a cheap observation, given the lack of quality in the genre generally outside of Nintendo’s main offering, it’s easy to see why.

And I’ll be completely honest, initially I was actually excited to play Nickelodeon’s Kart Racers. Mainly because it seems like the character roster is made just for me. Growing up in my family, we got Sky TV just before Nickelodeon came over from the US, and as I’ve gotten older, I’ve enjoyed many a cartoon from the channel. I haven’t seen most of them for years because I’m all mature and grown up now – don’t laugh – and so having a game launch in 2018 with characters from Ninja Turtles, Rugrats, Spongebob and Hey Arnold! was a pleasant surprise. Maybe this wouldn’t be so bad after all. But right from the start the warning signs began, that the overall package was going to feel hollow. From the initial menu screens that look bland and uninspiring, to the shorthand used on the buttons to navigate the menus, it all felt a little rushed and rough around the edges. Some of the button wording even bordered on the confusing, with an option at the end of each Grand Prix race to select the “Cup” option, which it turns out actually means “quit this grand prix so you can begin a new one” making it essentially a slightly more specific “quit” button than the one sitting right next to it. Yes it’s minor, but for me it exemplifies how rushed and haphazard Nickelodeon Kart Racers feels.

If we move onto the character roster, that I was initially happy about, this was also a bit of a letdown. Yes, all of the aforementioned cartoon franchises are present, but in total this includes just 12 playable characters, with no apparent unlockable ones hidden away. And whilst twelve would be a totally acceptable number if these characters were well-designed and had their own racing nuances allowing for tactical play and a bit of strategy, the different character models here are purely cosmetic. The dodgy type of cosmetic that you might buy from a friend’s auntie with only a 20% risk of melting your face off. To put it bluntly the character models are ugly, and feel like they belong in a different console generation, and their personalities have been stripped back to virtual silence, only showing emotion through gestures. The choice to exclude well-known catchphrases from the TV shows is a daft decision, making the experience feel shallow and lifeless, and removing any enjoyment or connection you may have had with them through the benefit of nostalgia. The racing itself is passable, but at the same time forgettable. Standard fare of Grand Prix, co-op racing and Time Trials are present, and are functional, and there’s also an elimination mode thrown in, where the last racer is removed every 12 seconds to keep things somewhat varied. Additionally, a slalom mode requires you to stay on the correct side of marked arrows throughout the race or face disqualification, like a simplified version of Wave Race. Control-wise, on a solid racetrack, the cornering and drifting feel smooth and generally responsive, meaning you can likely handle whatever is thrown at you in terms of track design with relative ease, even on the high-speed difficulty. Things go a little awry when racing on slime, as, perhaps understandably the handling worsens, but the decision to make your vehicle bounce around all the time through it was a poor one, made infinitely worse on the tracks that are entirely slime. But worse still is when your vehicle adopts the gliding technique mid-air like previous Mario Kart iterations, because at this point the rational control manual is just thrown out the window. Not only is the y-axis not inverted (a heinous crime, but not a deal-breaker), but it also doesn’t seem to make sense how to properly control anyway. Up and down sort of vertically strafe your glider, rather than tilt most of the time, and the easiest option is to nose-dive as quickly as possible to the ground to resume more manageable and sensible controls on terra firma.

The tracks total 24, but often feel repetitive and unimaginative in nature. They’re all set in a locale from one of the four TV franchises in the character roster, but whereas some are more obvious, such as sewers being linked to the Ninja Turtles, having a random school, which by process of elimination must be from Hey Arnold! just felt lifeless and empty and in no way invoked happy memories from my childhood from these shows. Also later Grand Prix cups, are just shameless collections of previous tracks, giving the illusion of more circuits, without the content to back it up. Some tracks have the nice touch of opening up different routes through them on different laps to keep things interesting, but despite this they still feel unimpressive because none of them truly feel unique as they’re all specifically playing homage to one of four shows, rather than having their own identity. Oftentimes whilst playing, I was left utterly frustrated at who this game is aimed at. Those reading this might feel I am being too critical for something quite clearly aimed at kids, but I would question that assumption. Sure the fact it’s Nickelodeon branded implies it’s for kids, but some of these shows stopped airing on the channel years ago, hence why I know what they are. So kids aren’t necessarily going to be chomping at the bit to play this, as they can’t play as their favourite current TV show characters. So then, is this one aimed at my generation, with its late 90s nostalgia references? Well it can’t be, because I have eyes, ears and a brain which mean I wouldn’t wittingly play this for much longer than I had to without yearning for something with more ideas and polish. So the only assumption I can make is the decision was to try to make it appeal to both groups, and as such upsets both in different ways.

And so back to the important question as always about how it stacks up to Mario’s high benchmark. And there’s no getting around this, not only does this game not meet the lofty standards of a Mario Kart title, but it struggles at times to even be an adequate, current entry into the genre at all. From beginning to end, it feels like it’s just doing the minimum it needs to function, like someone went through a checklist of what constitutes a bare bones kart racer, and made sure that they were all ticked. It feels like a rushed, shameless video game cash-in to a film release, just with the added sad fact that no such film exists. And it’s a shame because the source material had potential to mean something to people, but the generic tracks, and lack of well-known catchphrases from the cartoons strips the title of any semblance of appeal or personality, that it sorely needs. And as it stands, in a world with Mario Kart 8 Deluxe and a promising Sonic title coming too, Nickelodeon Kart Racer is too poor to recommend with a straight face.

Comfortable cornering and drifting
You can race as Hey Arnold!

Nickelodeon Kart Racers is just about a passable karting game. It feels rushed and bland, meaning there's little here to inspire you for very long.