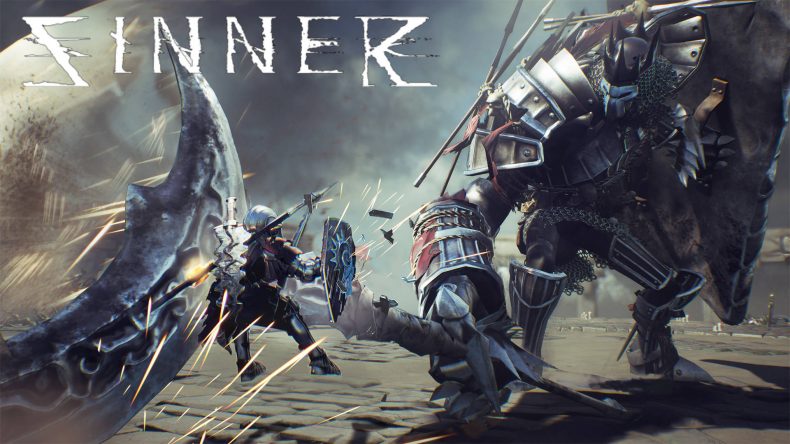 These days it seems you only have to toss a coin into a crowded room to hit a Demon’s Souls clone. The influence of From Software’s punishing gauntlet has infected everything from AAAs to indie darlings, with titles like The Surge and Salt & Sanctuary borrowing ideas wholesale from the Japanese developer’s playbook.

Until now though, no one has really tried to streamline the experience. Most “Soulslike” games inhabit sprawling, interconnected worlds where even the grunt encounters play like tiny boss fights and maps are for softies. Well Sinner: Sacrifice for Redemption takes the basic premise and, if we’re honest, the aesthetic, from the Souls games and attempts to do something a little bit different by removing pretty much everything but the boss fights. There’s no exploration, no levelling up, no gear to find or chests to open; you’re simply tasked with defeating eight bosses, seven of which represent the Deadly Sins. Each time you die you’ll be given the option to try again or give up and attempt a different encounter, and you’ll always initially spawn with 7 health refills, 20 electrified spears, 7 firebombs and 2 flame coatings for your melee weapon of choice. Your grey-faced, glowy-eyed avatar can switch between sword and shield or a two-handed weapon, which after a certain point you can switch out for a scythe – but that’s all. You don’t unlock more weapons and you can’t upgrade what you’ve got.

In actual fact, counter to the norm, you get weaker with each fight. The hub is a circle of standing stones that open portals into the boss arenas for a price – which is where the Sacrifice part comes in. In order to face a boss, you’ll need to give something up permanently. The aspect of Greed, for example, takes a portion of your health and stamina (you’ll get an overall increase when you beat the boss, but not enough to recoup what you’ve given up). Other bosses halve your supplies, permanently weaken your attack and defence, or embrittle your shield. The only way to restore these Sacrifices is to resurrect the bosses, which creates an interesting dynamic when you just cannot beat an encounter with what you have and the only way forward is to bring a boss back that you’ll have to beat again later, with even more of a disadvantage.

On paper it sounds very good: the epic boss fights of Dark Souls with none of the pesky environmental dangers or respawning mobs, but in practice it’s less rosy. With nothing to gain, there’s nothing to lose, so it becomes essentially a pure boss rush – which is fine in a faster paced game, but I found Sinner to be very plodding. Movement in general is very similar to Dark Souls, even down to the animation when you use a restorative, but it lacks the polish and nuance of From’s genre leader.

Undoubtedly, Sinner’s crowning achievements are the bosses themselves. I didn’t feel there was anything overly original in their design, but each one is a multi-stage puzzle with very few tells and very little signposting. Take the first one I faced, for example, which was Greed, a crow-faced demon that reminded me of Dark Souls’ Nito. Most of the attacks trigger a poison metre (again, borrowed directly from Souls), but there are no curatives that remove poison, and so once the metre is full you’re effectively dead. Hitting you with a variety of wide-ranged AoE effects as well as a heat-seeking projectile that ignores obstacles and simply doesn’t quit, the boss also switches up attacks with little or no patterning. Add to this a teleport that can go anywhere without a tell, including directly on top of you, and it’s a recipe for a very frustrating encounter. About halfway through, the boss will also hop up onto a giant tree stump at the centre of the arena and four smaller versions will appear – the whole time they are there, your poison metre will fill, and it took me many attempts to take them out while also dodging a relentless barrage of AoE and ranged attacks.

This, of course, is the purpose of the game: you are intended to die many times and eventually succeed, but the problem is that there’s very little clear signposting or patterning, and therefore so much of it comes down to pure trial and error, which I don’t find all that fun. Often I’d die to the same attack a few times, then anticipate it, only for the boss to do something completely random and kill me. Eventually I began to feel that Sinner was more of a chore than anything else. With no new powers or skills to unlock, progression is only encouraged by the prospect of moving forward to the next fight, and as you can face the bosses in any order you choose, I inevitably ended up ignoring the ones I couldn’t kill and then having little desire to try again later. A case in point was the avatar of Lust, who begins the fight as a white-garbed swordswoman in an arena unashamedly aping the lake behind Bloodborne’s Bergenwerth Academy where you fight Rom the Spider. It took me half a dozen attempts to finally beat her, whereupon she immediately turned into a giant fleshy monstrosity with full health. I eventually gave up on her and haven’t been back to her since.

Those who relish a pure, no-frills challenge will find a lot to like here. For the most part, Sinner is a well-crafted game that makes sense to play in bite-sized sessions. It looks pretty enough on the Switch’s small screen, and doesn’t lose much integrity when the system is docked. There’s very little story to get in the way of the action, with short cutscenes introducing each boss and no items or hidden secrets to display flavour text with, so it leads with pure, straightforward gameplay – which feels almost brave in this day and age.

Casual players, though, I would advise to steer clear. The price tag is fairly steep for what it is, and Sinner offers little in the way of replay value. For speed-runners, though, it’s something of a Spartan paradise.

A hardcore boss rush game with a Dark Souls flavour.