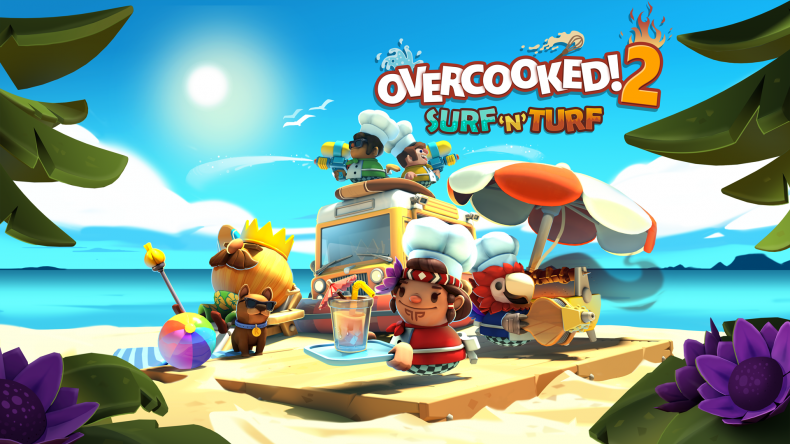 Overcooked! 2 is a superb co-op experience and one of the best games to play with friends this year. I reviewed it on PS4 and Switch a little while ago and the Overcooked! 2 – Surf ‘n’ Turf DLC that released earlier this month takes you for a frustrating tropical vacation to the beach.

Having never experienced the original Overcooked when it got DLC, I didn’t really know what to expect in terms of content coming into this. Team17 and Ghost Town Games has delivered great value with 12 levels (that’s a huge amount for the price compared to the full game price) but most importantly, the new takes on some mechanics and new recipes. Kebabs, smoothies, conga lines, waves that make you hate water, and more await you in Surf ‘n’ Turf. While the smoothies and kebabs recipes aren’t too different, the bellows for kebabs is a great addition. Aside from this, washing dishes using the watergun is also great. Tropical island aesthetics are always fun to see implemented in different kinds of games. I had high expectations given the already great stuff in the base game, but this DLC blew me away. I had quite the moment when getting the 3 star requirement was within reach only to miss out thanks to the conga line early on which is hilarious given how relaxed those people in game are while ruining my kitchen.

The biggest problem lies in the star requirements not being appropriate for solo or co-op with 2 people play in my experience. While the base game was lovely at accommodating 1 to 4 players to the point where the people who wanted more of a challenge had a 4th star added in New Game+, the DLC is just unforgiving to the point of frustration or two or less players.

Overall, this DLC has loads of great ideas through new mechanics and content but falters in difficulty. This is much harder than the base game and while offering a challenge is never a bad thing, playing this solo feels beyond unfair with the level requirements for stars. I’ve been playing Overcooked! 2 online almost daily on PS4 or Switch and while it takes seconds to get into a game, I’m always surprised at how well designed the core game is. This DLC gets everything right but the difficulty.

Overcooked! 2 – Surf ‘n’ Turf is an excellent expansion that adds interesting new mechanics and more than enough content to justify the asking price with only poor difficulty scaling holding it back.