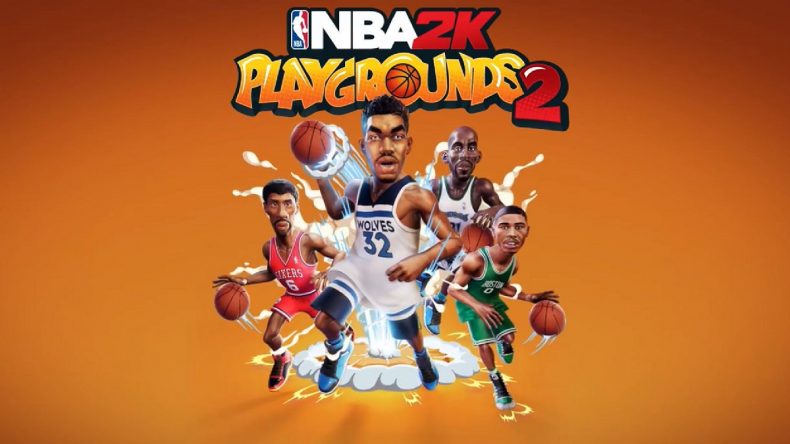 Basketball sims can be far too involving, whether you’re (basket)balls deep in adjusting player contracts or altering training programs for your entire team, it was often a case of 40% playtime, 60% menus. I miss the days of NBA Jam, and even NBA Street, so when Playgrounds was released, the prospect of having a bit of fun on the court seemed like a welcoming release. NBA Playgrounds was a pretty decent game to play, but it felt lifeless off the court.

Yes, the act of playing had some nice moments about it, and the ease at which to play was a real treat; it just didn’t have anything else beyond the vapid main modes, and the card collecting was a pain in the arse. Thankfully the sequel has been picked up by 2K, and thus has been improved in many different ways. It’s still a let down when it comes to unlocking players through spending currency, but the ballin’ is back on top. It’s incredibly easy to play the 2v2 basketball it promotes, featuring simple pass, shoot, steal, crossover, and jump inputs. There are variations to shooting when holding in the right trigger button, and some special moves occur depending on whether you’re controlling an NBA star known for a signature shot. Gameplay flows wonderfully from one end to the court, and the AI does a good job of staying on top of the game. The main area that suffers is the shooting.

Clear cut chances bounce off the rim when you’re slamming it hard, which seems ridiculous. All players have stats that contribute to their ability to perform in the different categories of shooting, but I found I still struggled with the best players. Also, having a shot meter in the bottom corner of the action detracts from the fast pacing and excitement, as you’re having to look at it to make sure your shot is on target; it’s not very accurate to how a basketball game should be enjoyed. The Lottery Picks meter is guaranteed to provide many laughs, but also frustration. Nine different power ups will randomly be selected after your team has gone on a bit of a streak, but the variety at which I seemed to get them was seldom achieved. Sometimes you’ll be given unlimited speed, heightened accuracy, or spots at which shooting from will double the points, whilst other power ups affect your opponent directly. You can cover their rim in ice, or put a curse on their shooting that’ll lower their accuracy, all helping to stop them from bettering you. They’re all useful, but the likelihood of using them all within a season is highly unlikely.

Speaking of seasons, you can now play through an NBA season that consists of 14 games, including three-match playoffs. If you’re playing the game on the preset three-minute match length you’ll be done in a couple of hours, and they help you to build up your Golden Bucks: the in-game currency. Whilst you’re not earning at an astronomical rate, it’s probably the fastest way at which to earn them naturally (other than spending real, tangible money). But that’s the issue – I don’t want to start with a randomly selected minimum of players. Granted, there are lots of players on offer (hell, MJ is in it for crying out loud!), but all packs are completely random, and the more legendary the players, the more expensive the packs are. And if you wanted to buy specific players, you could be spending as much as five times for a special pack. It’s microtransactions in its ugliest form, and I’m not a fan. It’s a shame because the fun on offer is everywhere, whether you blast through a season, or go online in the Playground Championships, which has improved online matchmaking tenfold compared to the original. The 3-point Challenge is a lot of fun too, offering bonus points at certain stages in your journey across the offensive zone. It’s a game you can enjoy alone, or with mates on your sofa, or over the internet. It’s very colourful, and the detail of the official teams courts are great. Team slogans are illuminated on LED screens, and beach courts have a lot of detail in their surroundings, making it lovely to look at too.

NBA 2K Playgrounds 2 is an improvement on the first, and despite an awkwardly placed shot meter and those damn microtransactions, this is a pretty good alternative to the grind of basketball sims. If you’re not fussed about acquiring the official players of NBA past and present, it isn’t going to bother you, but for a game that brags the licensing, it seems like a wasted opportunity.

Despite the action on the court being fun, it's the looming frustrations of microtransactions that hinder player development and the overall appeal of the game.

You may also like
2k sportsnba 2k playgrounds 2PC