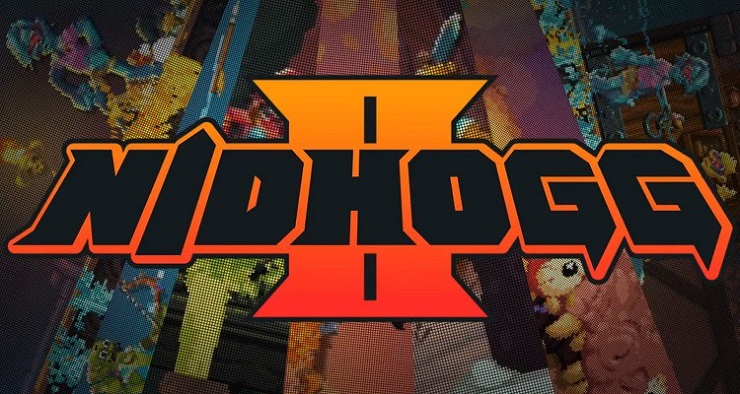 It’s no hidden fact the original Nidhogg was a cracking game, is it? It may have looked like it came from generation Atari, but it’s visuals weren’t ever trying to be the draw. It was in the addictive multiplayer where the game succeeded, and succeed it did. You and a friend, stranger, lover, or enemy would take part in a side-scrolling duel to the death, trying to kill each other with swords until you managed to get to one end of the 2D map before the other. Nidhogg 2 throws a few more weapons in the mix, as well as offering plenty of vibrant 16-bit environments to throw down in.

Nidhogg 2 looks a lot different to the original, but the changes are gorgeous. It’s substituted the basic Atari inspiration for a more pixelated design, harking back to the Sega Mega Drive era. The 10 stages are diverse, featuring lots of different environments like the bloody insides of the Nidhogg worm, lush eutopias with waterfalls and blue skies, pirate ships, and castles. There’s lots to admire about the artwork both in the settings and the characters. The artwork has been done by Toby Dixon, and by a quick Google search of his previous work, you’ll see how great a match he is. It’s warmingly grotesque, especially the design of the Nidhogg. Watching him bob up and down in the sky after swallowing you is amusing to say the least. The main premise remains the same: you have to kill your opposition to allow you to progress to the other side of the screen, or map. There are seven different screens, and by advancing to the next one you get closer to victory. Once you reach the end, the Nidhogg will eat you up, meaning you’ve won the game. There are more weapons this time, and whilst you do have a similar sword to the one in Nidhogg, there’s a bow and arrow and a dagger too, along with different sized baldes such as the long sword. Perhaps the essential mechanic here is chance; you don’t get to choose your weapon as it all depends on what you’re given at the time, making each match a story of wits and your proficiency with the weapons.

Each weapon has it’s benefits, but depending on the type of player you’re facing, you’re not always going to be able to use the range of the bow. The long sword is good for reaching further, but not great with being on the receiving end of an aerial attack. You’ve still got the different positions to hold your sword, but you can also slide towards the feet of an enemy, throw your weapon, disarm, and fly through the air. When your opposition is down, you can trample on them and turn them into mush as well, which is very satisying. Its gameplay has always been basic, but it’s addictive, and Nidhogg 2 is no different. There’s a single player mode that lets you play through all of the 10 stages as quick as possible, and it’s fun for a time, but there’s no reward. Yes, you can win on every stage, but if there’s nobody to brag to, or to watch as you rip your shift off and beat your chest through pure hysterical joy, what’s the point? Nidhogg 2 allows you to face off against friends via local co-op, and also online against others in standard matches and through 8-player tournaments with different variables to change the way games play. The game is at its best in these modes, and with every player fighting differently, you’ve always got a new challenge.

The playable characters can be customised, giving you some indiviuality to your hero of choice, and there’s a great humour to the game, whether through the way these characters look, or in the environmental quirks you see in every stage. It may have inspired many games since its release, such as Black and White Bushido, but the king is back; Nidhogg 2 is a fabulous fighter, providing the most simplest of concepts and giving you pure unadulterated excitement. If you adored the first one, there’s no reason you won’t love this. It’s soundtrack is banging, its violence is over-the-top and chatoic at best, with hours of gameplay in its joyfully reptitive nature. All hail the Nidhogg!

Single player is basically a tutorial

If you loved the original, this is just as good, with a great new art style and some nice changes to combat.