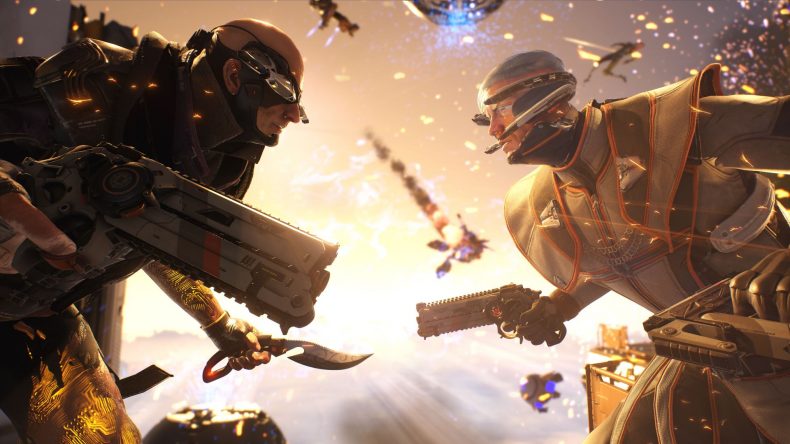 On the surface, LawBreakers may seem like another arena shooter trying to be Overwatch or Paladins but it goes a little further and defines its own niche in the market. The pacing of the game is insane and if you’re familiar with the old-school Unreal style of gaming you’ll feel instant kinship with LawBreakers, because it’s even more hectic and extremely visceral. We’d expect nothing less from Cliff Bleszinski’s studio.

There are going to be many comparisons that anyone playing LawBreakers will make to Overwatch so let’s get those out of the way now before continuing, because it’s the proverbial elephant in the room. Yes, LawBreakers is an arena shooter with a host of characters of various classes. The only other comparison that you can make to Overwatch is that the customisations and skins for each character are categorised in the same way: White, Green, Blue, Purple, and Orange quality items denote its rarity, price, and how much they alter the character’s base appearance. Stash Drops (loot boxes) are also very similarly presented, but if a formula works then there’s no reason to change it.

LawBreakers feels like a classic Deathmatch experience that even the recent Quake Champions doesn’t quite capture. Fast, visceral, intense, and an absolute bitch to master. There is a tactility to the game that creates a satisfaction you only get from the likes of old-school Unreal and Quake. There are nine roles per side, with both sides getting its own character for each, sporting their own design, voice casting, and personality. As far as gameplay, both sides are identical. There’s a lot to learn with each role, from the quirks of their weapons and abilities to, arguably the most important part, their movement mechanics. LawBreakers is all about movement and failure to master this part will result in repeated death and increased levels of frustration, as you will be unable to match the level of your opponents.

Gravity defying combat isn’t just a gimmick or tagline for the game, it’s a core mechanic. Certain characters can create pockets of low- or zero-gravity zones, instantly changing movement in that space. Maps will also have large sections – usually the central portion of the map where most of the conflict with ensue – of low-gravity, and not knowing how your character reacts in these environments will leave you up in the air as a slow-moving target, ripe for the picking from an opportunistic Assassin or Gunslinger – which is where I get most of my kill contributions.

There are five game modes in LawBreakers, but these fall into three similar categories: Uplink and Overcharge, Turf War and Occupy, and the ever-so-fantastic Blitzball (no, Final Fantasy X fans, not that Blitzball.) Uplink and Overcharge is all about grabbing an object from the centre of the map and bringing back to your base – in Uplink this is a satellite, and in Overcharge it’s a battery. The item you grab will have to sit inside your base and charge to 100%, and then take another 20 seconds for it to deploy and score you the point. All of this happens while being constantly attacked by your enemies, intent on taking this coveted item back to their base to do the same. The constant conflict means that you’re never going to get a quiet moment to have a breather or scratch your bum. Each map has multiple entry points into your base and keeping an eye on them all is near-impossible, so unless you’re shit-hot-awesome, the enemy will be taking that item back to their base. It’s this constant conflict and back-and-forth flow of the game that makes it so exciting and rewarding to play, because there’s always something happening and it’s usually hazardous to everyone’s health.

The only difference between these two game modes is that the battery in Overcharge will retain its charge even after it’s removed and taken to the opposite base, while Uplink will reset the count every time the satellite part is removed from its charging location. I prefer the Overcharge mode for that very reason of creating extra tension and those on-the-buzzer plays I’ve come to love from competitive gaming.

Turf War and Occupy are, as you’ve no doubt guessed, point capture and hold modes. Turf War consists of three points across the map with point A and C being very close to the spawn locations of each side, and B is the contested middle ground which everyone’s blood will invariably start to drench. I wasn’t initially sold on this mode’s idea because it seemed like nothing new, but after playing it again and again I realised that there’s something very engaging going on underneath it all. Once all points have been captured they all turn inactive and the scores are distributed to each team: you score a point for each location you control. You’d think that a game as chaotic as LawBreakers would see no tactical gameplay taking place, but this is where I was pleasantly surprised because a choice starts to form: do you trust that the rest of your team ‘got this’ at Point B and go for one of the other points, or maybe your team are thinking the same and you need to hold ground yourself? The game is all about conflict, so the rotating choices that come with each round of these points being active becomes the real genius of this mode.

Occupy, on the other hand, is a single point that spawns and remains active for a short time before moving to another location on the map. These points are supposedly active for 45 seconds but rest assured it will feel much quicker than that. It’s yet another game mode that forces conflict all the time, especially when the maps are small enough to learn in a couple of minutes and perfectly symmetrical for complete fairness. You start to feel that the whole time you’re playing you’re in the thick of it, and that’s just excellent.

But the best game mode is Blitzball. You may have already gathered this by how I introduced it earlier, but not only is the game mode a lot of fun, there is an added bonus for Rick & Morty fans: the ball is voiced by none other than Justin Roiland, using his Morty voice, screaming things like “I’ve been dropped” and “Oh no!” constantly. The aim is to grab a ball from the centre of the map – as if you hadn’t guessed that already – and run it into the enemy base where a small glowing pad is waiting for you. You might be thinking that this is reverse capture the flag, and while you’re not far off, there is more to it. The ball has a shield around it every time it enters play or is dropped, so you need to wait for that to dissipate before it can even be picked up. Also, there’s a shot timer when it first enters play, which will return the ball to the center if a score is not made. Once again, facilitating constant conflict. When you pick up the ball you have to run it to the enemy base, so you’re not just fighting your way back through relatively safe ground with your allies covering your retreat. You’re diving through a gauntlet of fire and brimstone and knives and bullets and certain death. It’s heart-wrenching to be inches from the goal and then explode into little pieces, but immensely satisfying when you’re the one that just stopped the enemy from scoring in such a manner. It’s immense fun, with a lot of back-and-forth gameplay that LawBreakers has been specifically designed to encourage.

While initially I hadn’t thought much of the game and saw it as another arena shooter without much to offer, and indeed when I started taking notes for this review it was a list of criticisms, after playing it and analysing it in greater depth I’ve changed my tune. There is a point in the game, and many other competitive games in general, where you get that “click.” It’s a fairly common point when you just ‘get it.’

Mine came from Blitzball. The match was neck-and-neck all the way through. We’d concede a point, but then get it right back in the next play, followed by conceding another one. There were moments where the ball was dropped multiple times, where the shot timer expired and it reset, and several occasions where the ball was picked up and dropped in the same instant until the shot timer was reset. It was intense. I was playing Kitsune, the Breaker’s version of the Assassin role, in the last moments of the game. The score was tied but a team mate had managed to grab the ball. Knowing that this was the make-or-break play of the game I left the ball-carrier in the dust and went on ahead to the goal, using the grappling hook to zip ahead. With one other person who’d had the same genius idea, we rained everything we had at the enemies defending their goal and cleared the room just as our ball carrier cruised in and took the point. It was a moment of badassery coupled with a synergy among team mates who weren’t technically communicating through voice or text chat. Pure intuition. It made me appreciate how tactical gameplay still has a place in the 360-no-scope frag-tastic chaos that is LawBreakers.

Boss Key Productions has done a stellar job of implementing carefully considered design choices that make this more than just another arena shooter. It stands on its own to fill a niche that’s different to any other titles out there, and I am thoroughly pleased to have the game change my opinions on it. An essential shooter.

Learning curve for mastery is steep
Sometimes too frenetic

More than just another arena shooter, LawBreakers stands on its own to fill a niche that’s different to any other titles out there, and I am thoroughly pleased to have the game change my opinions on it. An essential shooter.

Cliff Bleszinski Is Back With New Game BlueStreak