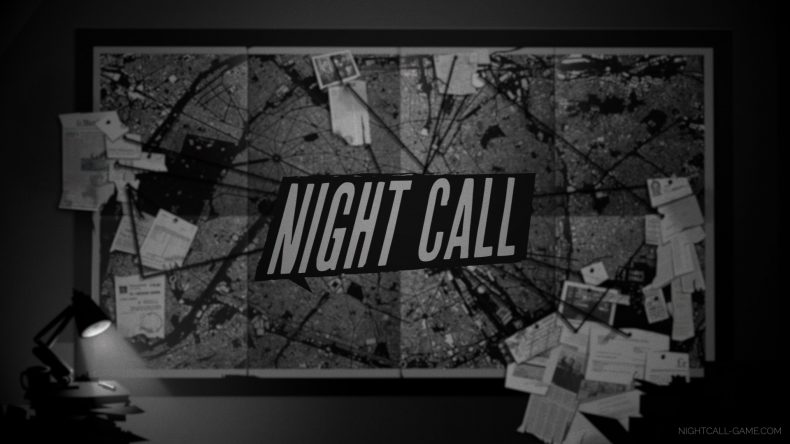 “I wonder what it’s like to be a taxi driver?” A thought that often enters my alcohol-addled brain in the early hours of the morning, after a night off ill-advised Jaegerbombs. As my driver politely carries out one of their many journeys, I’m filled with a warm sense of wonder of what it’s like to be in that front seat. Or maybe that’s the heat from the 18-inch meat feast pizza in the box on my lap that seemed like such a good idea 20 minutes ago.

Night Call might just be the answer to my drunken musings, as it looks to deliver a character-focused murder mystery in the centre of Paris, through the eyes of a local taxi driver. The sole survivor of a serial killer murder spree, you find yourself being blackmailed by the local police into helping catch them or face jail time for your shady past. So now your job is not just one of transportation, but also investigation and redemption. If you’re lucky there’s also the opportunity of revenge against the one who tried to kill you, the wound in your side a constant reminder of your close escape.

So out you go, into the depths of the Parisian night to collect fares and clues to help you in your new-found vocation. Doing so, sees you come into contact with a wide variety of characters who find themselves in need of a lift. With over seventy characters in the game, from a priest to a sex worker, to people simply enjoying a night on the town, your interactions will certain be vivid and memorable each night. Each punter has various conversation trees with you often having numerous response options to their current chatter. Different choices may yield different responses and emotional reactions, and occasionally extra clues for your case.

It’s a system that actually works really well initially, because everyone you meet for the first time feels like a closed book that you have to carefully open to fully appreciate, turning the pages to discover more about what makes them tick. Every time someone new sits in your cab, there’s a sense of intrigue, an opportunity to learn about a new person from scratch. And there will be times where well-considered responses will build a strong bond between you, and other ill-judged comments could result in shortened conversations or even cut trips short. A nice touch is if you pick up the same characters multiple times across your week-long investigation, you may be able to build on previous interactions, and further certain story arcs, and flesh out certain characters and their motivations.

However, for all that good work, there’s a sad truth to Night Call that mars the experience after a while, and that is frankly, that seventy characters aren’t enough. Now that may sound incredibly daft, but the reason for that is down to the way the game plays. Each of your seven nights, you’ll likely pick up five or six passengers, and take them to their destination, conversing on the way. After that, it’s a quick collation on your clues on your pinboard in your studio flat, and then bedtime. If you’re chatting to thirty or forty characters during one investigation out of seventy, there will be some duplication based on the encounters being random. For some reason, there was no logic put in the game to prevent repetition and not all characters react differently if you’ve already met them previously. So I found myself on different nights having the same conversation with a passenger, with the same dialogue options. Now, sure I can maybe respond in a different way to see what outcomes I get, but that’s a very minor benefit.

To make matters worse you cannot skip dialogue at all in this game, apart from the opening sequence at the start of a case. You can click through dialogue to speed things up, and I just found on my second and third case (and there are only three to choose from) that I was clicking frantically to speed up conversations I’d heard time and time again. Which, for a game that should be about immersive conversations and characters, is a massive misstep.

The game’s likely counterpoint to this criticism will be that you have a certain amount of control of who you pick up in your taxi. Icons appear on the map, and as you move your car close to them, the passenger’s face is revealed. You can choose to refuse the fare if you don’t like the distance, direction or indeed the character themselves. You can then move onto the next one and choose that instead if the request is more to your liking. But for some reason, a decision has been taken to not just make this a murder investigation game, but also a brutal lesson in the financial severity of being self-employed in a big city.

You start off with a healthy bank balance, but every night, no matter how many fares you take on, you’ll find that you never make money, once your taxi firm has taken their cut, and you’ve paid for food and other expenses (something you have no control over, but is a deduction from your kitty at the end of each night). So each night is a toss-up between pressing on with the investigation or making ends meet. And did I mention that you’ll likely have to fill up with petrol at least twice, and those inner-city prices are NOT cheap! Whilst I get there’s a level of realism here, it’s a bit of a miss if this hinders your progress. On my first case, I got right down to the final night, but with a negative bank balance, only for my boss to retake my car, and effectively receive a game over. But because the game autosaves, I could only restart the case already in a financially-crippled situation just hours earlier, with no chance of making enough money to turn it around. So that really was game over, and three and a half hours work gathering clues was wasted.

All this happened on the medium difficulty setting – the way the game states it is meant to be played – and it tarnished the experience for me. I don’t want to be worrying about my bank balance when I’ve already got the police threatening to throw me in jail and I could accidentally send the wrong person down for being a serial killer. Or worse still the killer themselves could finally catch up to me, the one that got away and wants to finish the job. It feels like such an unnecessary constraint that affected the way I played future cases and hampered my enjoyment. I’d avoid places of interest in the investigation unless they were close by to conserve petrol, and I would avoid paying for additional information from informants because I knew it would eventually send me bankrupt. And there’s a homeless character who I’m friends with that was an interesting character, but I had to refuse his fare every time because I knew he didn’t have the money to pay.

And it’s a shame because, behind these frustrations, the cases are well put together, and strike a decent balance between sensible and challenging to solve. You feel like you’re constantly chipping away at the mystery and the seven-day timeline feels like just long enough to give you the confidence in selecting your killer correctly. And the characters, repetition aside, are actually really interesting, with memorable moments such as literally taxiing a cat around Paris, or dealing with a well-spoken elderly lady with a form of Tourette’s. It’s just a shame these experiences are hollowed due to the constraints the game arbitrarily puts on you.

“I wonder what it’s like to be a taxi driver?” Well, if Night Call is anything to go by, the perks are it’s an opportunity to meet a host of interesting characters and at the same time solve a murder. Downsides include feeling like you’re having the same conversations over and over, and constantly struggling to stay above the poverty line. Sadly, it doesn’t sound like the job for me.

A title that grabs your attention and has you hooked almost immediately. But after a while, the repetition and constraining design choices will put you off.

Football Drama coming to Steam and mobile in September