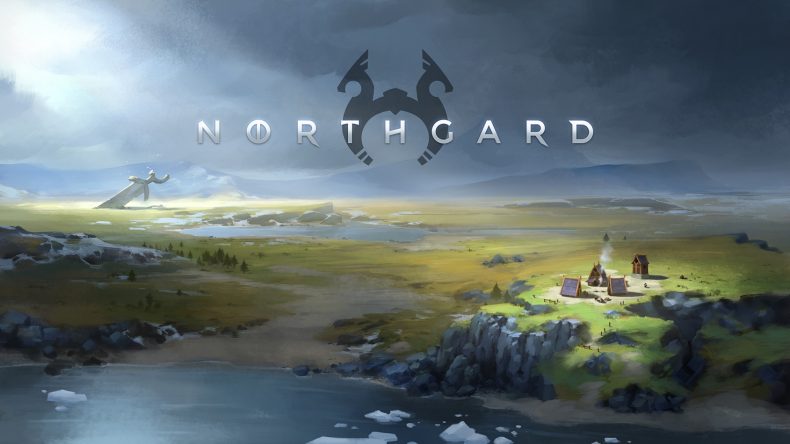 Vikings are something of a romantic fantasy for me, and I’m sure many others too, so when a game comes along that offers a chance to live vicariously through the eyes of a clan leader it’s hard to pass up. Much like the life and times of the legendary warriors of history, Northgard is an unforgiving game with a great many things that can – and will – cause you and yours a lot of strife.

Picture the scene: The Bear clan are a sturdy folk who have technology trees that give a little buffer in harsh winters, and yet when the heavy snows set in and the hard Winter rears its ugly head wood supplies are being burned faster than you can say “Thor’s beard!” and food stores reach critically low levels. Not to mention your clansmen and women are getting sick meaning that they’re slowly losing health, and all the while those bloody neighbouring tribes keep on throwing warriors against you. It’s brutal, it’s unrelenting, and it’s utterly compelling.

There are several considerations that you need to make when playing Northgard that differ from most other RTSs and city building simulators. Firstly, your villagers aren’t set into a specific role – which I love! When you’re in need of a temporary boost of woodcutters or food production, simply assign a villager to that task. Provided you have room in that building for another worker, of course. This opens the management of your clan to a greater level, as units can be floated around to fulfil roles as need arises. Secondly, map regions are very important to control and maintain. Each tile is a region of land with its own attributes and features; some have fertile land for farms or forests, others hold iron or stone deposits, some have permanent global effects for your clan, and so forth. Along with this, each tile has an upper limit of buildings that can be placed in that region and although these can be increased by 1 with some land development, that upper limit is still very restrictive.

Lastly, the choice of clans. There are currently six clans to choose from: Boar, Stag, Wolf, Goat, Raven, or Bear. Each has its own playstyles, perks and specific clan-unique tech tree talents that make it difficult to choose a favourite. Each gives you a means of outdoing the others in one aspect and thus the choice comes down to your desired playstyle or victory condition; Domination, Wisdom, Trade, Fame, or Map Special.

There is a basic technology tree that requires Lore to progress and unlock further talents, with each milestone requirement increasing exponentially. Clans have talents that are unique to them, but these are all in-line with their overall perks and bonuses, giving you a vital edge as you continue to develop and grow your clan. That said, it would be nice to see more done with this system that branches your choices furthermore for personal preference than the game needing it, however. The Bear clan, for instance, have a unique tech tree talent that adds +1 happiness per area with at least one military building meaning a split of military buildings across multiple regions is needed to capitalise on this. They also gain bonuses to military units during Winter, and more efficient resource consumption during these months.

The Boar clan are at the other end of the spectrum with more focus on production through their menders (healers) giving production bonuses in a region. These units also double-up as loremaster when they’re not actively fulfilling their role as healers, increasing your tech tree progression and getting you closer to that Wisdom victory condition.

While Northgard is fairly simple game to grasp and get into, mastering it is no mean feat. Nuances in the mechanics and a need to very, very finely balance your production and consumption means that moving your villagers between jobs and tasks is almost a full-time deal. Maintaining a military force all the time will take away from production, but not defending your borders with towers and warriors will leave you open to attack and more work for your healers. Not to mention the harsh winters, repairing your buildings following a raid or earthquakes, or simply just recovering from sickness can put a very large spanner in the works. Combat is also more hands-on than you’d expect at first glance. Sending your units to an area of the map will set them to attack any hostiles in the area. While this is something that you can auto-pilot, there’s more efficiency in playing an active role in the combat element of the game. Enemies will attack the nearest character to them, so cycling and moving units that are under attack backward and forward again will switch your enemies’ targets, allowing you to maintain damage output with a low health warrior without losing them outright. During large skirmishes across the map this gets hectic, but actively managing your combatants means that you can save valuable people. Rather than losing them on the battlefield, it was more efficient to send them back to work on resource production and replace them with a fresh and full-health combatant from home.

This was the point in my time with Northgard that things became a lot more interesting and it becomes more than just another RTS-come-city-builder. It was at this point that the game became utterly compelling to me and my sense of time disappeared. Managing every little aspect of what my villagers did, where they went, who and what they fought, maintaining and upgrading buildings; I was a Viking clan leader, and quite an effective one despite some terrible Winters setting me back.

Since leaving Early Access, the game now comes with a long and challenging campaign that will run you through your paces, from starting up a small clan and progressing through to more advanced mechanics and victory conditions that could take far longer than you’d expect. The early parts of the story are somewhat cliché. We’ve seen many of the motivations for each major player before, but it serves to set the scene and tone of the Viking lifestyle, while continually propelling you forward. Depending on how you take to RTSs in general, and how effective you are with the game’s systems, this may not be of much interest to you; however, it does offer a lot of content that will teach you how to be a clan leader like no other. I’d recommend at least giving the first Act a play through as it’s well worth your time. It’s not a perfect game by any stretch. The decision making of AI opponents are often questionable, multiplayer is a mix of players of varying skill levels and competencies without any form of discernible matchmaking, tech tree progression can make or break you but is quite simplistic, and some of the more specific nuances of the game took a little time to understand fully. That’s also part of the experience with RTSs and city-builder games in general, though. Trial and error, and slow but inexorable progress. I may not agree with these sorts of design choices, but that does not take away from the experience in the slightest.

Northgard is a must-play game for fans of the genre and could serve as a very good starting point for the newcomers who are just discovering RTS games for the first time. It combines city management with decent RTS combat in a harsh and unforgiving environment, but certainly not insurmountable if you persevere.

Northgard is a must-play game for fans of the genre and could serve as a very good starting point for the newcomers who are just discovering RTS games for the first time.