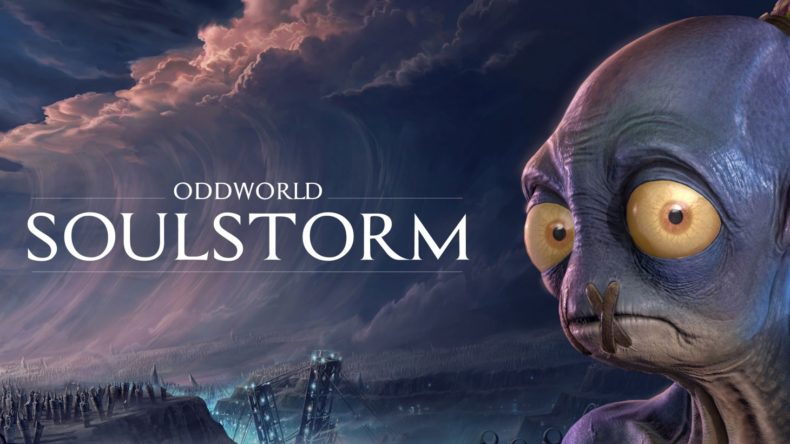 It’s been a long time since we had a new Oddworld game. After four cult classics back on the PS1 and Xbox, Abe and his array of pals vanished outside of a remake and a couple of HD upgrades. In that time there have been a few planned new titles (such as Hand of Odd, a strategy game cancelled in 2004) but none of them came to fruition. Now for the first time in 16 years, Oddworld diehards have something totally new to play with Oddworld: Soulstorm.

I call Soulstorm a new Oddworld game, but it’s more of a re-imagining of the second part of Abe’s story, Abe’s Exodus. Best described as the sequel to the remake New ‘n’ Tasty, the story follows Abe after freeing his Mukodon brethren from Rupture farms. There’s very little time to celebrate the liberation of his species though, as the devious Molluck still hunts the Mukodon for financial gain. The story is surprisingly serious and pretty engaging, although especially early on the cutscenes are rather long winded.

To escape your captors and save your kind, you’ll need to jump, possess and sneak your way past an array of Slig guards and traps. It’s the same classic Oddworld formula from the PS1 games, and as compelling now as it ever was. You’ll spent the majority of time between checkpoints trying desperately to avoid a litteny of deathtraps, with a little help from the tools you loot from the world. 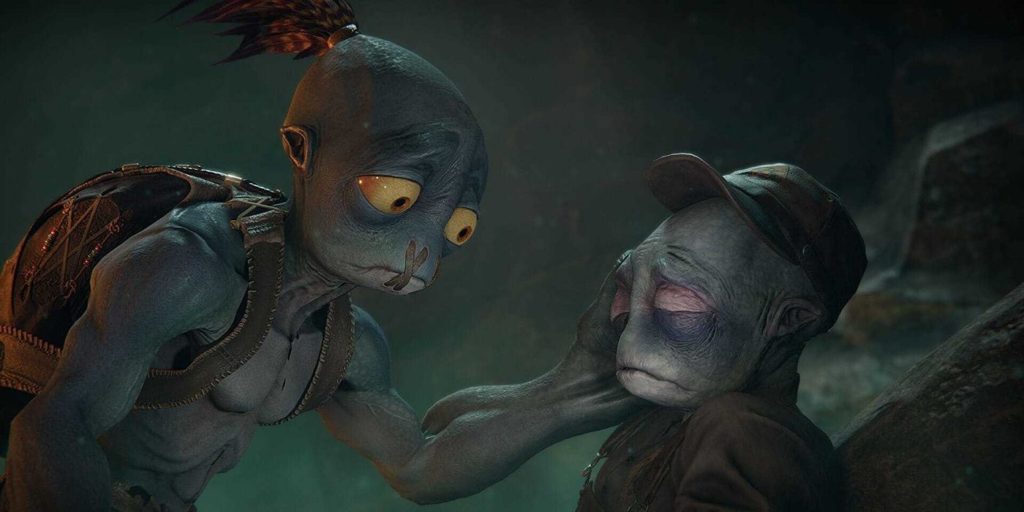 There are plenty of items you can use to distract or dispatch your enemies, and they’re all very satisfying to use. Disabling enemies with stun mines might be the kinder way to go (and creates the opportunity to pickpocket for extra loot) but creating a trail of flammable liquid to burn them alive is much more satisfying. If there’s something you need to progress it’ll always be available nearby, but otherwise you’re free to experiment with your exploding pop and bouncing gum. There’s a fairly robust crafting system to make use of as you make your way through the 15 levels, so you’ll want to grab all the junk you can from jars and lockers.

If items fail to get rid of any threats, your powers of chanting will certainly do the job. As long as there isn’t anything preventing you from using your abilities, you can possess most foes and make them shoot one of their allies, jump off a cliff or even just explode in a horrific display of viscera. If you use all the methods that Oddworld: Soulstorm provides you’ll be able to successfully commit all manner of murderous deeds.

When all else fails, you can always fall back on your running and jumping. Unlike other Oddworld games, Soulstorm offers you much more control over Abe. Gone are the static jumps you couldn’t control, and replacing them is a much more modern scheme which even includes a double jump. This modernisation makes the game much more playable, without compromising on the overall difficulty. 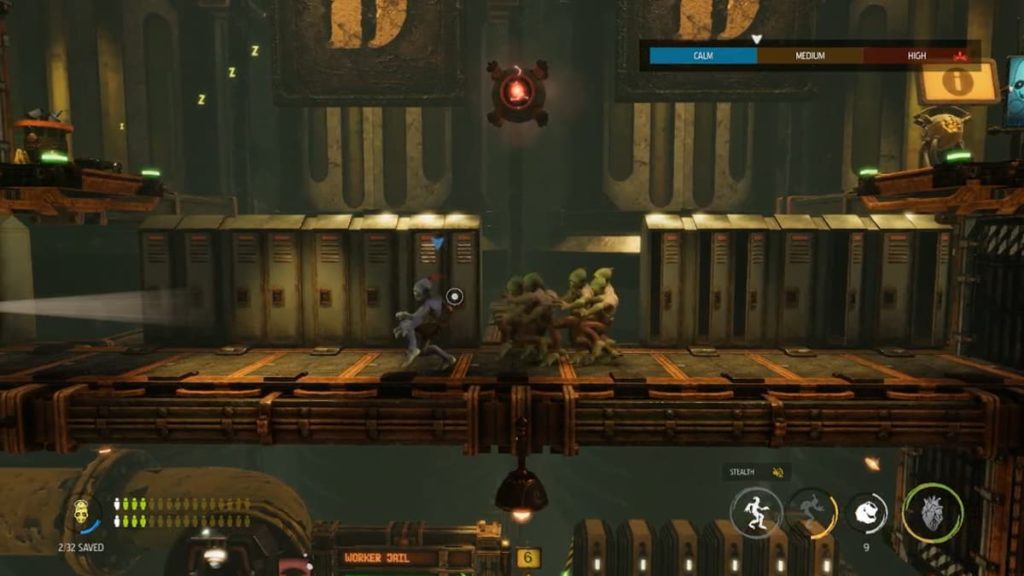 While trying to discover and implement the best plan of action, you will die a lot. Checkpoints are never too far apart, but the sheer number of obstacles in between you and the next one means sometimes you’ll be waiting a while until you reach the next. It can be frustrating to see a checkpoint so close yet so far away, but with some perseverance and maybe a little imagination you’ll save your species eventually.

It wouldn’t be an Oddworld game if you didn’t have to guide your pals to safety, and fortunately Soulstorm has this covered. Mukodon you find can be healed and will follow you to the ends of the earth. You’ll need to keep them safe from baddies until you find a portal for them, as their even more flimsy than you are. Commanding them is an important aspect of this, although unfortunately the fart button is gone.

In the run up to launch, Oddworld: Soulstorm had been described as a 2.9d platformer. While this might be a slightly ridiculous label, the game really does try to make use of more than just the 2d plane to great visual effect. As you turn corners you’ll see further ahead, and the backgrounds are packed with friends and foe alike. There’s a particularly impressive section early on where 300 Mukodon are trying to escape their captors in the background, and if you don’t deal with the Sligs in the area they’ll be mercilessly gunned down.

Every one of the game’s stages has optional medals to earn, for completing side activities to the best of your ability. There are medals for number of allies saved, enemies killed, secrets found and many more. If you’re a completionist there’s a ton of extra value in going for these goals, but I found it quite hard to imagine jumping back into a 45 minute or longer level to try and find a missing collectible. 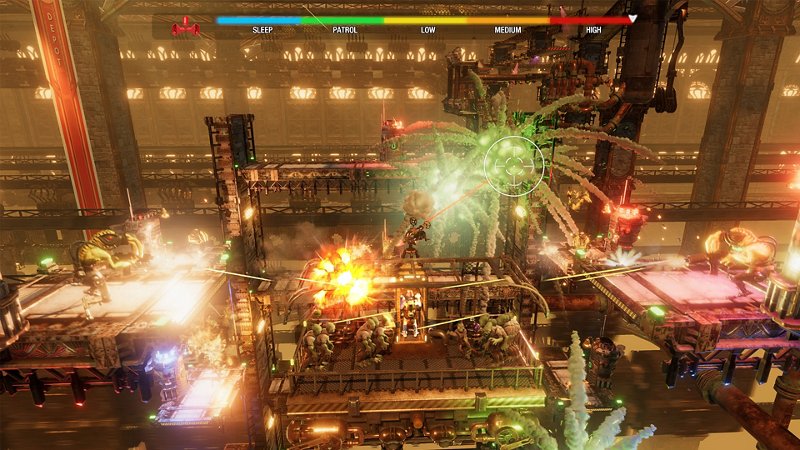 There’s a lot of fun to be had with this new title, but it isn’t perfect. One of my biggest frustrations was with the checkpoints, that don’t reactivate unless you’ve reached a new one. This lead to many situations where I had a couple of minutes of collectibles on one side, and loads of traps to disarm on the other – with no way to save part way through. Also as much as I like the 2.9d effect, there were some situations where I couldn’t throw an object at an enemy because the path I was on curved. It doesn’t really make sense to have a more layered environment if your character doesn’t understand how to use it.

Oddworld: Soulstorm is a great modernisation of a classic series. With the same macabre humour and brutal difficulty of its predecessors, fans of Abe’s adventures will find a lot to love here. I had a few issues with checkpoints and the game’s perspective, but cannot deny that this game has a ton of soul.

Oddworld Soulstorm modernises and reimagines the series classic gameplay, but doesn't hold back on the difficulty