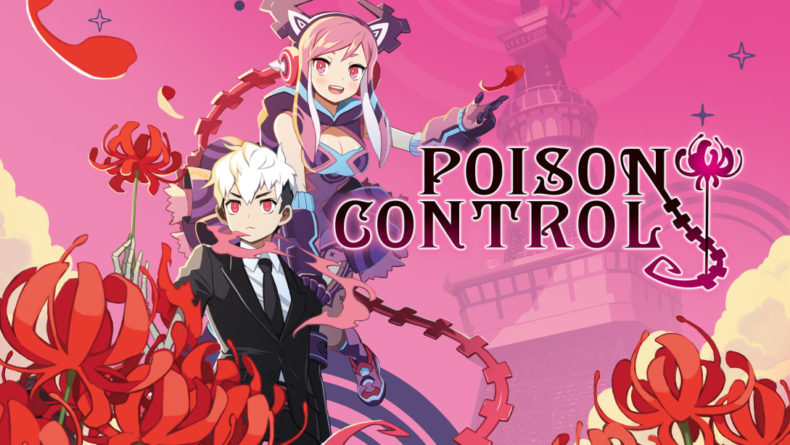 It took one screenshot for me to realise that I had to play Poison Control. Few games dare to use as this garish a colour palette, but Poison Control slaps you in the face with vibrant pink from the moment you load up the game. The latest NIS game is much more than a visual spectacle though, with a unique blend of third person shooting and gunge cleaning in hell.

After waking from a screen of red, your character quickly realises they have no memories in an afterlife full of monsters called Klesha. Fortunately you immediately meet and bond with Poisonette, a friendly Klesha who wants to escape this hell and live a normal life. After realising you now share the same body, you decide to work together to find a way out. It’s a fairly bonkers premise, but one that provides an interesting backdrop to the proceedings. 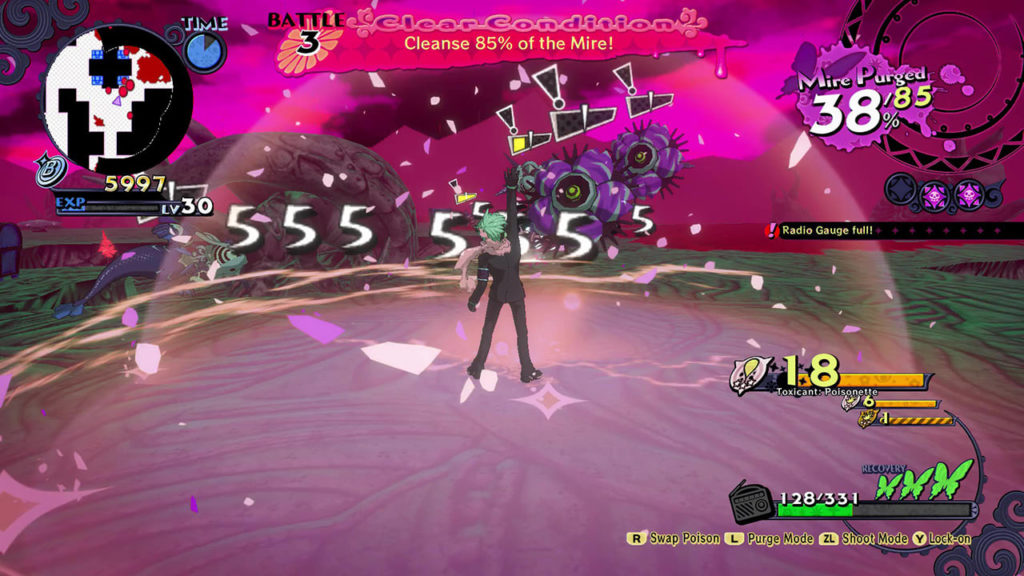 It turns out that to escape hell, you need to collect stickers from hell’s Belles. These young women in peril are stuck in a world made of their despair, and it’s up to you to find out what’s wrong and help them overcome it. They have a huge array of issues, that range from humorous to tragic. Helping an allergy sufferer by shooting cardboard trees is nice and lighthearted, but stopping a girl who’s murdering animals to try and bring her dead dog back to life pulls on the heart strings a bit more.

Each of these hellish areas is packed full of aggressive Kleshas and poison, but fortunately you’ve got just the tools for the job. Thanks to your new soul mate, you can swap who is in control of your body to suit the situation. Your character can be equipped with all sorts of firearms to take down the nasties, while Poisonette can clean up gunk.

It’s safe to say the gunplay in Poison Control is a tad ropey, but functional. You start with a pistol, but will end up gathering a bunch of upgradable shotguns, explosives and rapid fire weapons. A lot of them are really fun to use, if a little unwieldy. Often Kleshas have obvious weakspots, but aiming at them isn’t always easy with some unreliable hit detection. 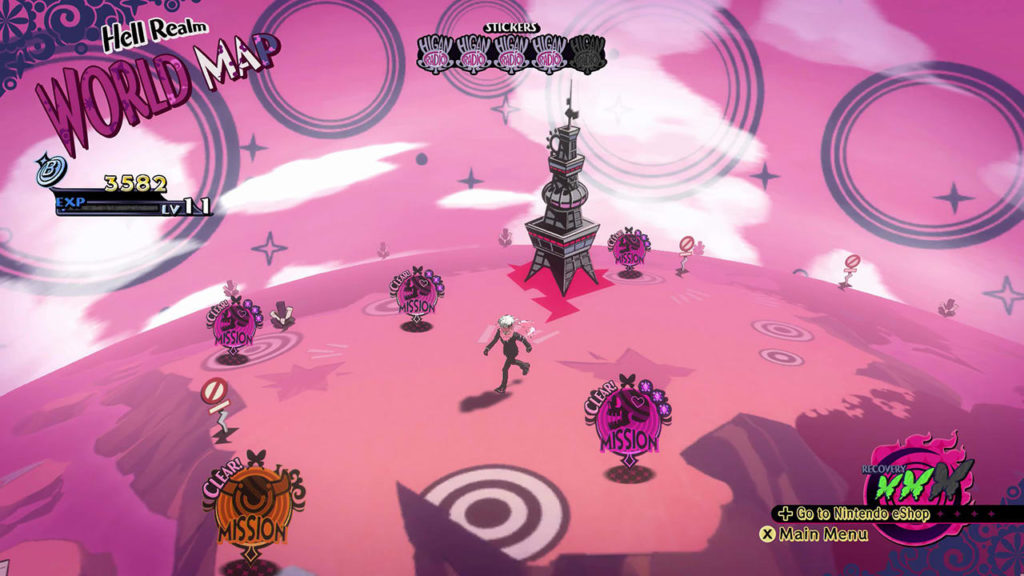 When you aren’t blasting baddies, you’ll be cleaning up the corruption with Poisonette. By changing to Purge mode, you can walk through poison mires unharmed and absorb them. You can only be in Purge mode for a limited time, but any enclosed circles you draw in the goo will be cleared and enemies within massively damaged. Switching between your character and Poisonette is key if you want to take down tougher enemies, with Klesha that submerge in poison and arenas full of damaging corruption to contend with.

Another great reason to clear poison up is to find secrets. Each stage has lots of hidden chests to find, containing money, health, and medals that unlock new upgrades if you find all three. Most of these are found by ridding the world of pools of poison, and it’s not hard to collect them all if you’re vigilant.

There are lots of ways to power yourself up in Poison Control, and you’ll need them if you want to escape the afterlife. Each gun can be powered up, with new abilities added to them like charge shots or larger spread. You can also buff your own stats, by equipping antidotes and catalysts. You can also gain new abilities by strengthening your bond with Poisonette, by picking conversation options to raise your Synergy, Empathy, Insight, Toxicity or Trust. 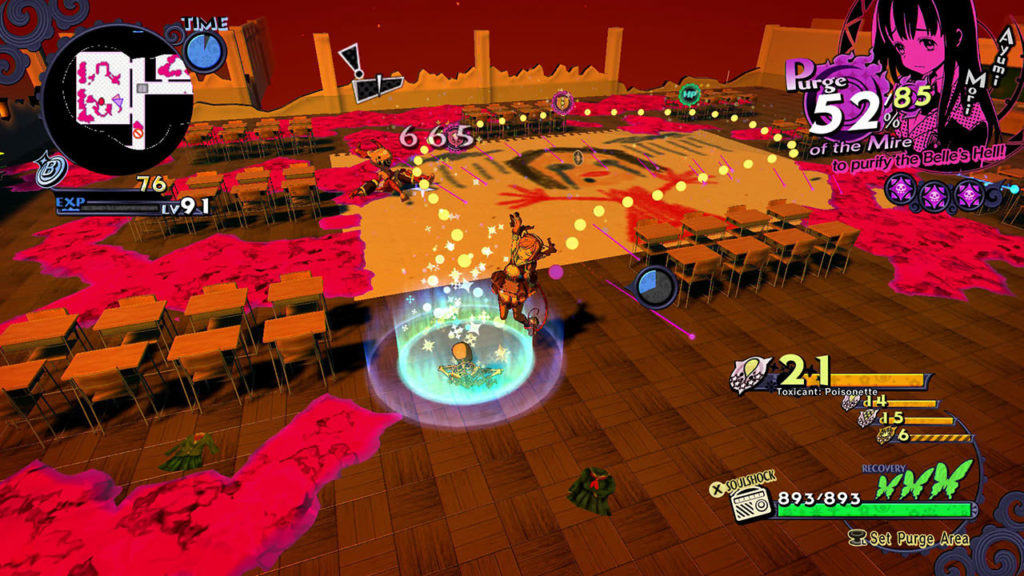 I’ve already talked about how much I appreciate the aesthetic of Poison Control, but I was equally impressed by the soundtrack. NIS have produced some of my favourite video game music in recent memory, and the music accompanying you on your adventure out of eternal damnnation is as good as any of them.

Unfortunately the further I progressed in Poison Control, the more technical issues I found. From the start there’s some pretty consistent instances of pop in, but these are the least of your problems. From the second half of the game onwards, I had some noticeable framerate issues, and it only got worse as more enemies arrived in the final few stages. It’s a real shame, and I’d advise maybe going for the PS4 version of the game if portability isn’t particularly important to you.

Despite having some gameplay and technical hiccups, I really did enjoy my time with Poison Control. If the technical issues and average gunplay is something you think you can overcome, you’ll find a truly unique experience with an interesting story and satisfying mechanics underneath the mire.

Poison Control is a very unique game, and if you get past its issues this playfully pink adventure has a lot to offer.