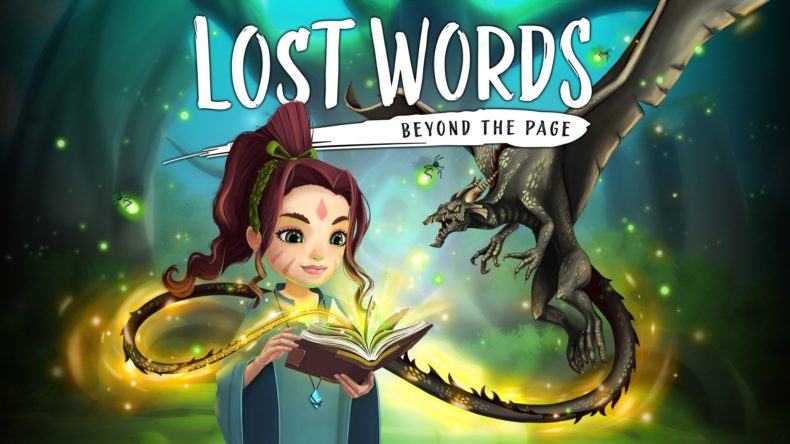 Lost Words: Beyond the Page started off as a Google Stadia exclusive, and I’m genuinely glad it didn’t stay that way for long. It’s a game that many won’t play, that many others will load into and abandon – but it’s one that everyone who plays it will resonate with on some level. Because at a glance, Lost Words looks like a twee, fairytale-inspired platformer light on mechanics and heavy on the wordage. It also features a young girl named Izzy writing in her journal. But stick with it for even ten or fifteen minutes, and you’ll see something genuinely beautiful begin to unfold.

Adolescent protagonist Izzy longs to be a writer and, on the advice of her Gran, keeps a journal in which to collect her many thoughts. Lost Words uses the journal to tell two tales, one of Izzy and her family, and another of the fantasy world she creates. As she skips and leaps across the pages, using the words as ledges and paths, the story unfolds with a rare eloquence that combines Izzy’s earnest interpretations with real-world truths. Written by celebrated video game scribe Rhianna Pratchett, Lost Words: Beyond the Page draws you in without you even knowing it and holds your attention tight – so tight you don’t even realise, at first, that it’s drawing you on towards an ending you won’t want to read, but won’t be able to turn away from. 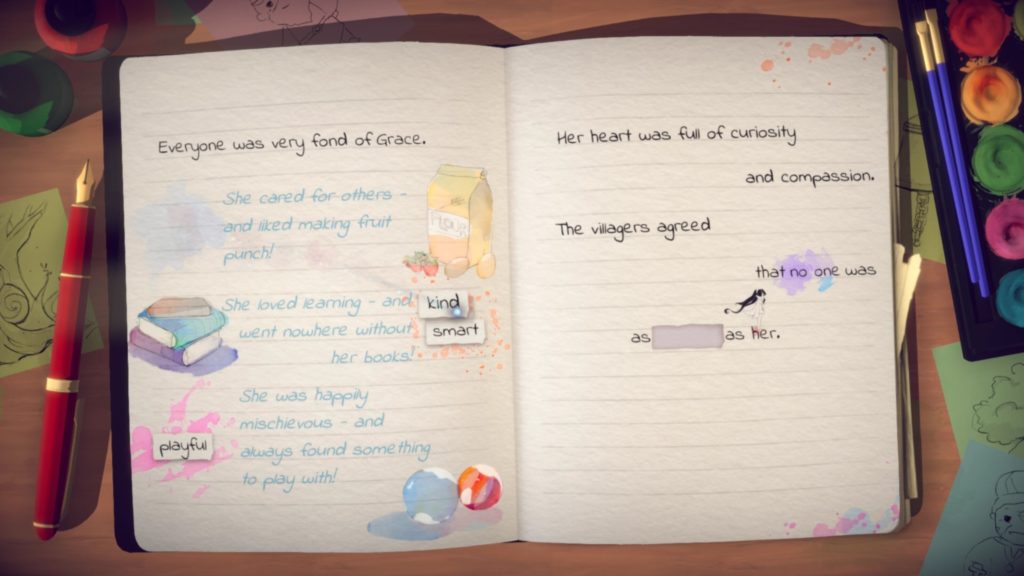 There’s real beauty here – in both the character of Izzy and in the fantasy world she writes. The story within the story takes place in the fairytale land of Estoria, where a young girl called Grace (you can choose from three names, as well as the colour of her dress and necklace) has just become the Guardian of the Fireflies, the protector of her little village. In this tale, a dragon descends and burns the village – and Grace sets off bravely through the fire and ruin to find the lost fireflies and save her family and friends.

The dragon is a metaphor, of course, for events occurring in Izzy’s real life that she doesn’t fully understand. As you solve rudimentary puzzles and make subtle choices, you’ll begin to draw parallels. If there’s a complaint to level against Lost Words it’s that, as a game (or even two games), it’s a fairly spartan offering. The mechanics of the fantasy world don’t stretch much beyond running and jumping and moving the occasional boulder, and while Grace’s “word magic” is a neat touch it’s never used to solve anything particularly taxing. 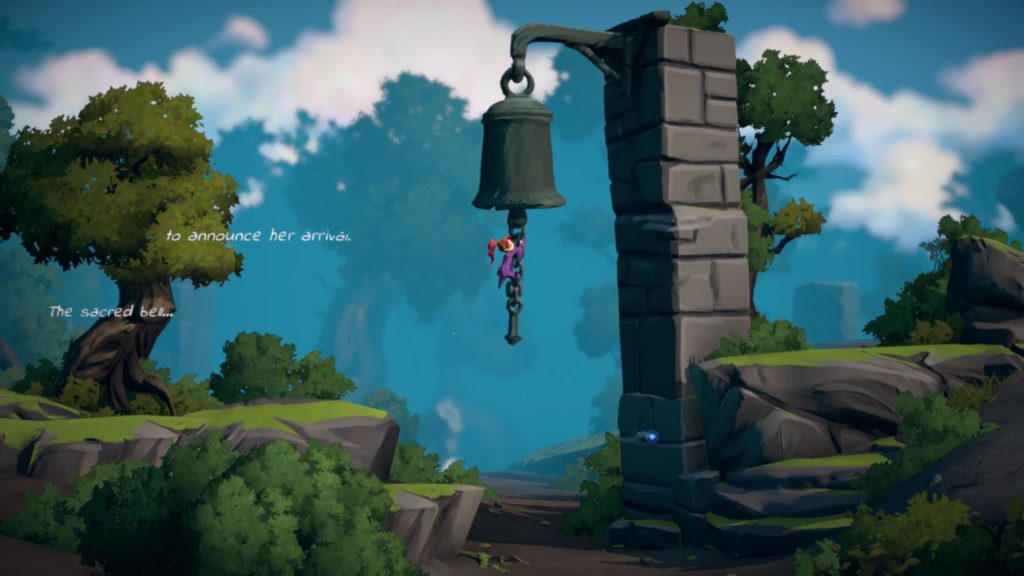 For example, you can select the word “Rise” to lift platforms, or “Extinguish” to put out fires. Later you’ll find other words like “Break” and “Repair”. It’s never unclear which word you need in a given situation and there’s not really anyway to fail. If you mess up, you’ll just respawn more or less right where you are. Likewise, Izzy can’t ever fail in her journey unless you literally stop playing, and so while it tells a genuinely moving and beautiful story, it does so without ever fully engaging you with its gameplay, and that’s a shame as there’s certainly potential here for it to have gone that much further.

But I’m not one for criticising what a game isn’t, and I fell in love with so many of its elements that I didn’t mind the game itself being fairly straightforward. The artwork is simple and beautiful at the same time, with Izzy’s pale journal pages splashed with shocks of colour and childlike animations. Estoria, by contrast, is consistently brighter and more vibrant.

Sadly, though, the beauty is there as a backdrop to a poignant and occasionally tragic story of a young girl forced to face truths that she shouldn’t have to yet, and anyone who has ever lost someone or had to endure the pain of a loved one suffering beyond their ability to help will feel a kinship with Izzy. Lost Words: Beyond the Page is a gorgeous, moving tale of two young girls facing an increasingly frightening world and eventually finding beauty where those less innocent might not, and that’s the kind of writing that transcends mediums.

Never at all challenging
Mechanically light

Lost Words: Beyond the Page is a gorgeous, moving tale of two young girls facing an increasingly frightening world and eventually finding beauty where those less innocent might not, and that’s the kind of writing that transcends mediums.

You may also like
Lost Words: Beyond the PageRhianna Pratchett