previous
Lost Words: Beyond the Page review
random
next
Stitchy in Tooki Trouble review
1 like 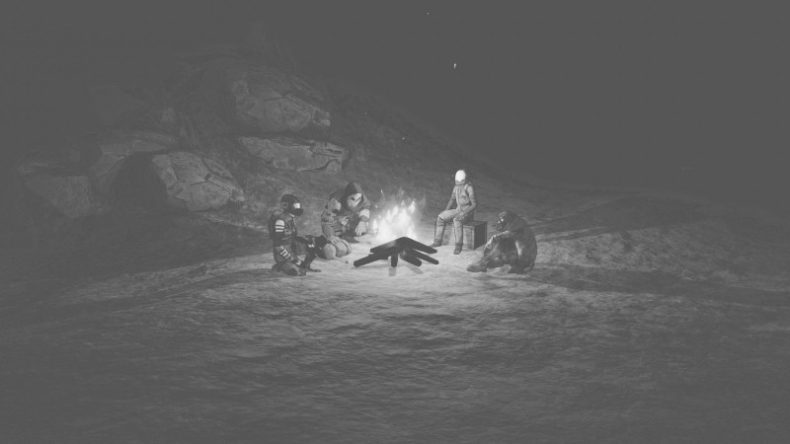 Survival simulators can be both frustrating and satisfying. Finding the right balance can be tough, but so can creating one that keeps players happy. Ashwalkers is different. Whilst it does have familiar features found in titles like Valheim, This War of Mine, and DayZ, it’s much more appealing. Keeping characters fed, warm, and rested takes a back seat to the amazing story on offer. Whilst these factors are key to survival, so is learning all about the four main characters.

The story focuses on survival in a post-apocalyptic wasteland ravaged by volcanic eruptions. You play as a group of four survivors trying to stay alive whilst facing many different threats. Petra is the fierce leader; Sing is the fighter; Nadir is the explorer; and Kali is the smart one. Whilst each playthrough only lasts a couple of hours, there are different endings depending on the decisions you make. These moral dilemmas can consist of choosing to attack another band of survivors, or killing a child for witnessing your acts. Some are fundamental decisions, and others can be tragically defining. 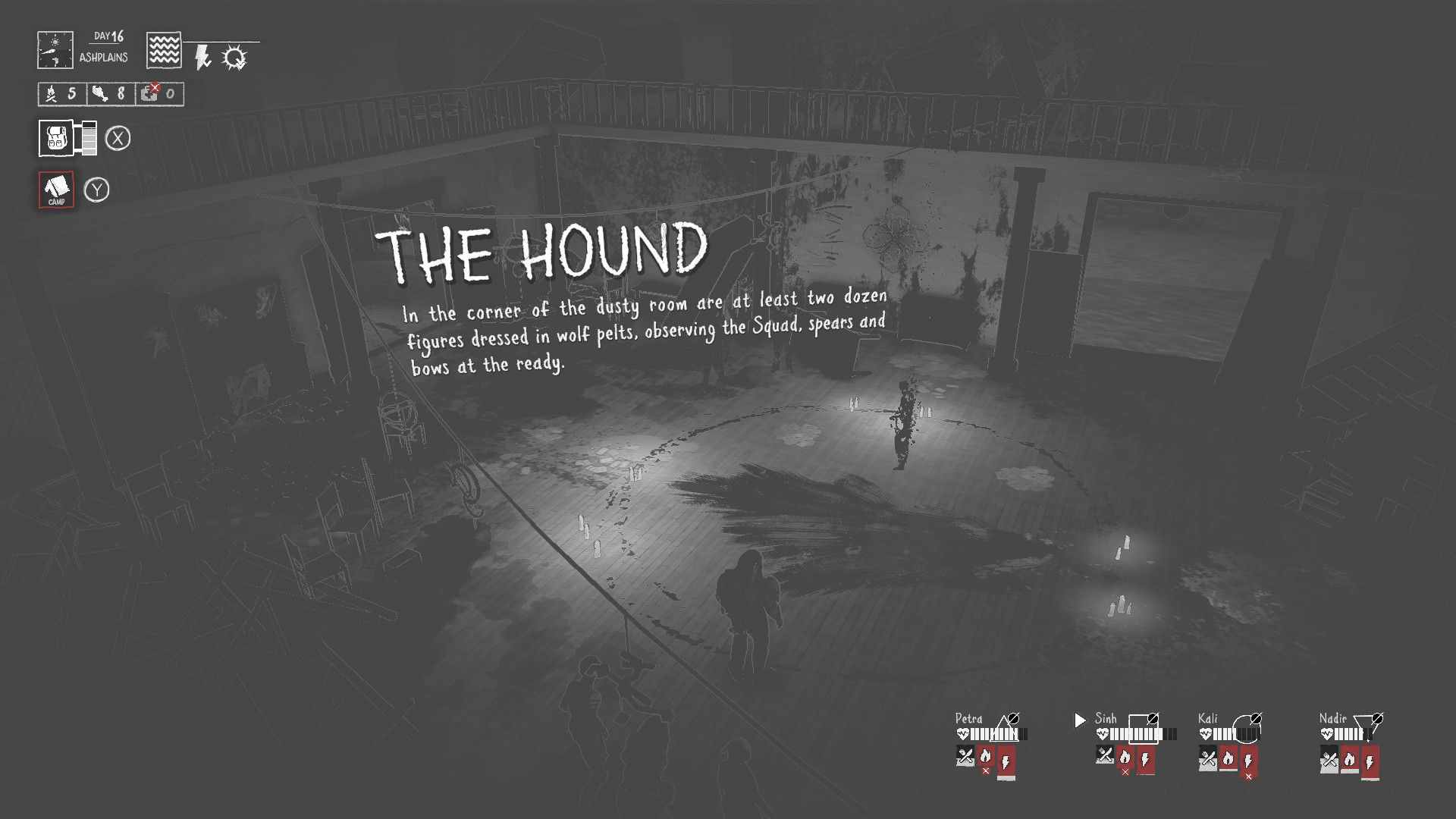 Ashwalkers is from Dontnod co-founder Hervé Bonin. His new studio Nameless XIII has chosen to make these decisions key to the narrative. Characters can become emotionally distant or deeply affected by their decisions, but the group can also grow stronger as a result. Being set in a harsh setting where death is around every corner and morals are thrown out the window makes these moments impactful. Additionally, these choices can also help the survivors out a lot. Choosing to step down in the face of danger as opposed to going in guns blazing can offer rewards.

Although the survival elements are easy to understand, they are vital to your survival. Exploring the environment thoroughly will get you food, firewood, and med kits. When you start to notice one of your group is struggling, clicking the Camp allows them to use the resources you’ve found. For example, if Sing took damage fending off a wolf, giving him a med kit will fix him. If Petra is tired, move her icon into the Rest section. There are options to let the group explore, chat, rest, and protect the camp. There’s a danger meter at the bottom of the screen, providing another thing to think about. You don’t want to be sleeping if a band of raiders is nearby. 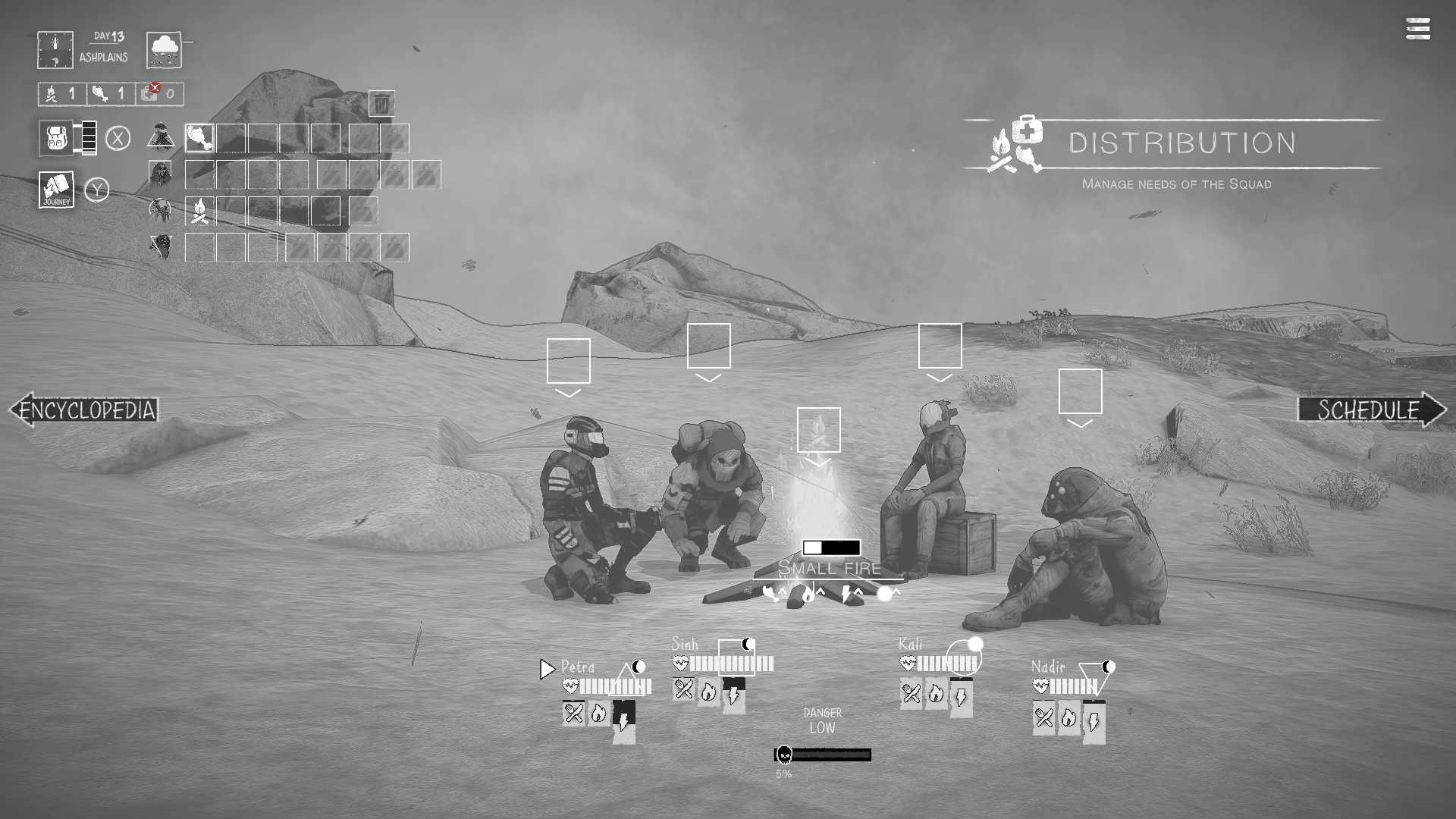 These moments at the camp are just as much about learning each character’s story as well as keeping them alive. By allowing a conversation to happen, each survivor opens up about how they got where they are. It’s easy to feel a bond with the characters, even if it is only through text-based conversations. With all survival games, death is lurking around every corner. If you do lose a member of the group through starvation or an attack, their death hits hard.

Ashwalkers: A beautiful yet haunting world

Moving around the environments is done via a point-and-click system. Whilst it doesn’t feel very freeing, you’ll notice just how much freedom there is in the next playthrough. With such dark subject matter, you may not feel the need to replay straight away. However, it is well worth doing because of the inventive nature of Ashwalkers. Nameless XIII has built a smart survival sim with a superb narrative backbone. 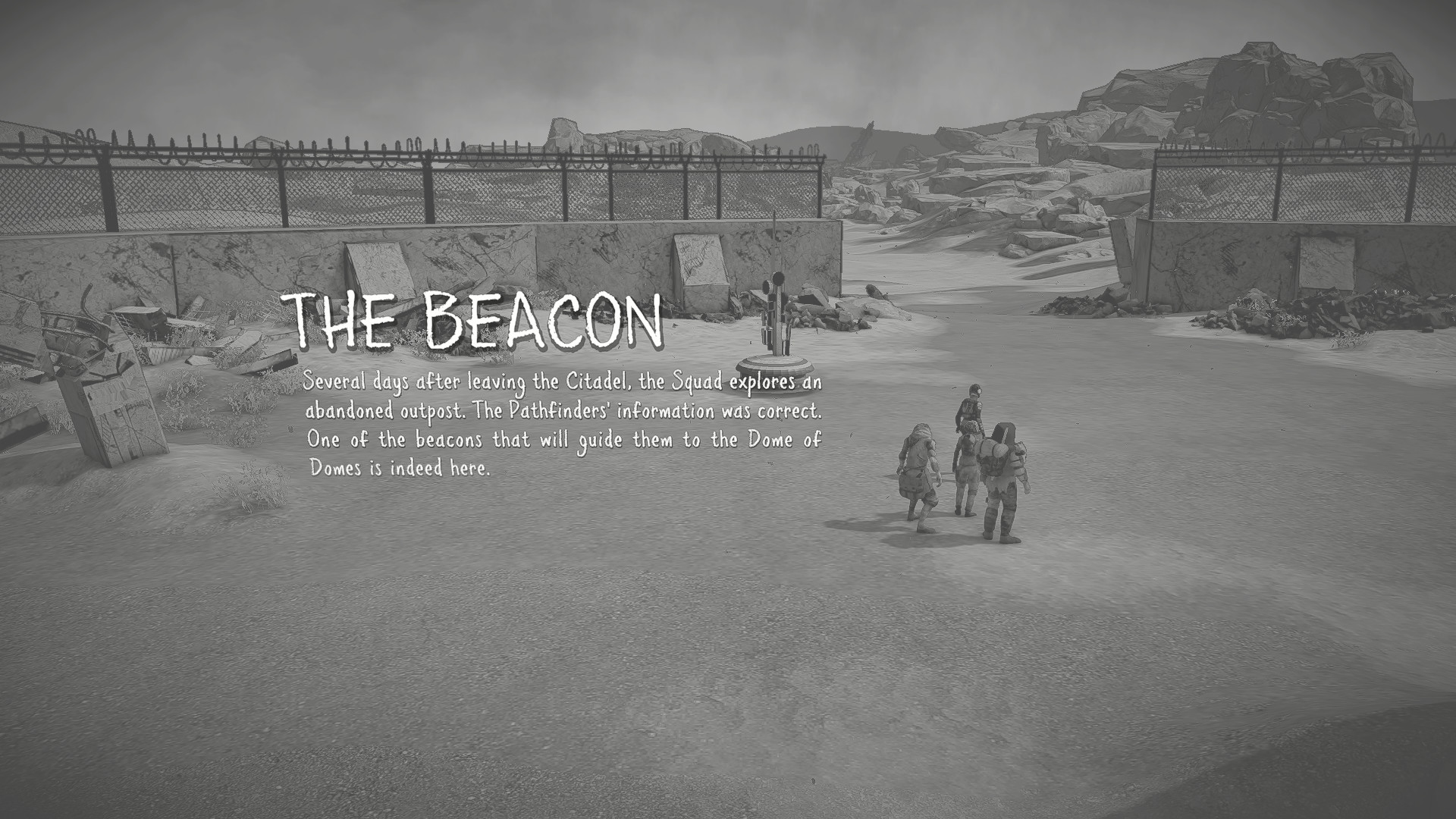 Learning about what has happened is part of what makes Ashwalkers so good. The history of the world you’re in and what has happened slowly unravels as you travel from zone to zone. The character interactions with each other and the people they encounter is genuinely interesting. There are times when the story can be quite emotional, but Ashwalkers has done a great job in making you feel a part of it.

Ashwalkers is an inventive survival sim that puts the story centre stage. Whilst managing resources and the survivor’s physical and mental health is important, the choices you have to make are where it’s at its most inventive. The setting is miserable, both in story and setting, but I was enraptured by it all. The replayability makes Ashwalkers well worth your time. If Life is Strange and This War of Mine had a video game baby, this is it.

Ashwalkers is an inventive survival sim that puts the story centre stage. Whilst managing resources and the survivor's physical and mental health is important, the choices you have to make are where it's at its most inventive.