This War of Mine Review 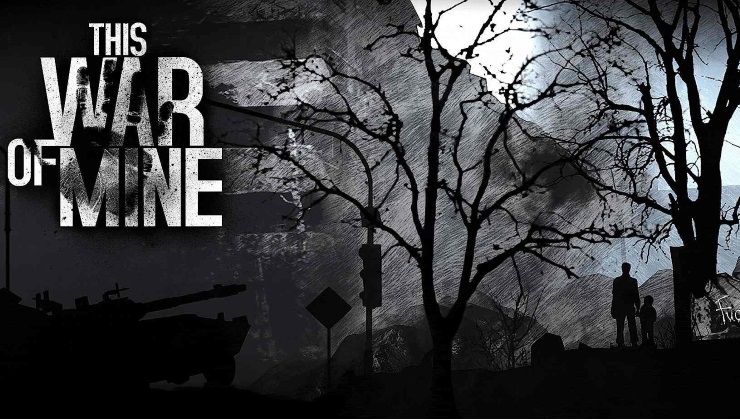 More often than not, the video game medium presents war as a sexy, explosive, fun time. You’ve got an AK47 in your hands and you’re told to shoot anything that moves, normally, in a country that’s being decimated before your eyes. This War of Mine looks at things from a more human level. You’re just trying to survive by accumulating scraps of all kinds, rather than attempting to maim on the battlefield. In fact, the battlefield is the last place you want to be, especially if you’re bringing a knife to a gun fight.

In This War of Mine, you have to come prepared, or else you’ll fall at the hands of your enemy, and your enemy is everyone in this now dilapidated environment. The city you once called home is now a warzone where scavengers hunt for crafting materials, food, weapons – anything. You are in control of three citizens that have somehow found each other and must overcome this life-threatening situation. By converting an old house into a headquarters of sorts, the three survivors are looking to do what they can in order to live through the war. This War of Mine splits into two sections: day and night. During the daytime, you control the movement of all three characters around a large 2D environment and must manage the group’s resources. Clearing away rubble, scrounging your humble abode for all types of materials (at the beginning, until you can scrounge no longer), eating, medicating, crafting and the like, are all on the daily to-do list. Once your newly found base has been relieved of all its hidden away trinkets, you must go out and search other buildings, and the perfect time to do that is, of course, during the dead of night. Once 8 o’clock comes, you have the option to send out one scavenger, and let members of the group have a rest by going to sleep, or keep them awake and have them guard the premises.

While there’s light there, you have a chance to work your characters by having them use the metalwork bench to craft weapons out of all sorts of materials you got in the previous night’s haul, or cook a few meals for your ever starving residents. It can get tedious as the days pass by, but that boredom is a reflection of this life the characters are leading. On occasion you’ll be raided at night, but this random event can’t be stopped during gameplay – it just happens. You have to constantly worry about trying to keep your group alive, and that doesn’t just include controlling their hunger. You have to make sure they’re not tired or sad, too. By having books, a guitar, or even a bottle of booze or a few cigarettes in the house, you can attempt to keep spirits up in this dire time. Each character has their own little bio (diary, basically) which is updated sporadically – generally after a relatively large event. For example, during my time with This War of Mine, one night, the scavenger of the group went out and robbed an old couple blind as they were inside their house, pleading with him not to kill them. The following day, the other house dwellers were either praising or ridiculing him for doing so in their bios. It’s a nice touch to attempt to flesh out these people, but it never goes far enough. You don’t know an awful lot about these survivors, therefore it’s hard to truly feel for their struggles. There are inconsistencies here, too. Every now and again, something resembling a speech bubble will appear above a character’s head informing you that they’re tired, sad, or whatnot. There are multiple occasions where a character will mention how stealing is necessary to survive in their bio, but then say the exact opposite in their dialogue. Sometimes, a random survivor will call to your door looking to exchange some of their items for yours. And while that’s a help, some of them will even reassure you that they aren’t looking for trouble. The thing is, they’re never looking for trouble. Not once in my time playing did one of these door-to-door knockers ever try and brute force their way into the house and attempt to loot any of my group’s belongings. This War of Mine is definitely a very personal experience, (my playthrough will be different to yours) but in my time with it, I didn’t see any threat during the day, and that added tension would have been welcome.

At night, you only worry about controlling a single person as you put the rest of the group on guard duty or let them get some sleep. Before your foraging escapades begin, you must pick a prime location to loot. Locations are displayed on a map, which also gives you a few details on what you’re walking into. The brothel might have to be approached with caution because bandits are regularly seen there, but there’s plenty of food on offer, and the local church has suffered some infrastructural damage, so bringing a shovel to get through the rubble is recommended. Prior to embarking on your trip, these descriptions are a must read. Rather than enter an area and be unprepared for a thug beatdown, you’re thankfully informed of the risks and rewards before you set off, so you can appropriately plan your course of action. This War of Mine shines in these instances as personal stories are created. While you may enter an area and stealthily takedown all onlookers, another person might see danger from the very beginning and opt to head back to camp. And stealth is very important. Each building doesn’t display itself fully to you, at first. Rooms in your direct line of sight will be completely visible, while others will be greyed out. Red circles on the ground will be displayed in areas that you can’t see, to signify movement; this could be a rat, just as much as it could be a nutcase with a gun. There’s a wonderful sense of dread when you enter an area, as you don’t know exactly what’s waiting for you behind every corner. The tension of night is a welcome change to the calm of day. However, there is no major difference in how This War of Mine looks at any hour – it’s relentlessly bleak. Rarely will you spot an area offering up a primary colour, as this world has been been broken by battle, and that’s reflected in the monochrome visuals. It exudes despair within the art style, and the sound design, too. Clean electric guitar and percussion builds during a nervous encounter with the military, while a more relaxed setting is perfectly accompanied by subtle piano keys.

This War of Mine wants you to care about the people who have been affected by the war, rather than soldiers on the front-line. Via conflicting thoughts the characters have, the cast’s paper-thin stories and an elementary crafting system, it never fully reaches its potential. But the moments where you’re racing across an outpost trying to dodge military fire and robbing someone blind right before their eyes; those are the points where this war does genuinely feel like mine.

Check out our video preview of This War of Mine.

While the human element of characters isn't as fleshed out as it could've been, This War of Mine is an interesting take on the war genre.