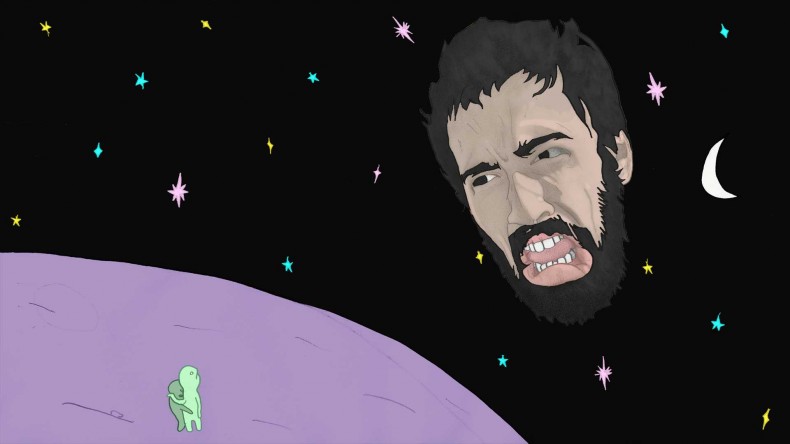 One Way Trip is a game unlike anything else you’ve ever experienced on a digital platform: it’s a story drowning in craziness and flamboyancy whilst still managing to root its importance in your soul. I doubt greatly that everyone will get something out of it or even enjoy it for that matter, but there is no denying it’s the most unique title of 2016.

After finding out the water supply has been poisoned, two brothers set off to find a cure. Within 6 hours, everybody that’s been exposed will die, but not without having some pretty messed up hallucinations along the way. One Way Trip is about the most bizarre characters interacting in a dystopian civilisation, trying to find peace or make peace with their friends as they approach the inevitability of death, still clinging onto the hope of survival.

This is a visual novel and your main responsibility is to pick a line of dialogue to respond with. It’s crazy how much dialogue there is, and it’s impressive how much work has gone into the story and the interactions between all the characters. You have a wide range of responses and they really do feel like they’re shaping the character you play the majority of the game as. Gordon, the younger of the two brothers, starts off as a particularly quiet, shy kind of guy, but as the story progresses you’ll become more confident, strong-minded and a force to be reckoned with. The range of characters in One Way Trip is phenomenal and their progression is equally impressive. Barry, your older brother starts off as a relatively confident person, but as things get worse he shows a much more vulnerable side. The rebels you encounter are a weird bunch of individuals; Persimmon Murder Mulder has a stern persona with an angry heart, whereas Wishberry Princess is a complete and utter psychopath. You’ll spend a lot of time interacting with many of them and it’s in the scenes where you’re just chatting with them that make you appreciate the work gone into the dialogue. At certain points in the story, the game will auto save and take you to a different screen to do so, providing unnecessary interruptions to an otherwise great narrative and this is my only big problem.

I adore One Way Trip because it reads like one of my favourite novels, and shares many influences with other authors I’m very fond of; instant similarities with William S. Burroughs’ Naked Lunch and Hunter S. Thompson’s Fear and Loathing in Las Vegas are there from the start; the imagery and dialogue is emotive of their drug-induced mind-sets. For the most part, the story and the characters rely on humour to appeal to the player, but there are many times when the subject matter and what’s at stake brings about some poignant moments, especially between the two brothers, Barry and Gordon. There is a lot of respect between the two brothers and as the two of them begin to understand how close to death they are, the emotional bond becomes a lot more obvious. Barry may be the older brother, but he relies a lot on Gordon’s positivity and maturity, and when I began to realise this, I felt a duty to make my brother feel better. It’s amazing how the dialogue choices feel like they have an impact, no matter how inconsequential they may feel at the time. One of my favourite moments is when you meet a robot called Barbot in the Science Building, and his lines are written beautifully; you really care for him, even though you are fully aware of how ridiculous the whole situation is.

The artwork is all hand drawn and hand painted, with experimental, avant-garde ideas in every single design. I couldn’t help but compare it to the kind of videos you’d watch on MTV at 4am, winding down from a pretty heavy night on the town. It’s bat shit crazy, but it works and it’s a testament to how much work has gone into each frame. There is a side story called Demon Chic (which is introduced as an episodic video game you and your brother can play) and even in that, the artwork and colour choices play a vital role in telling that story. Speaking of Demon Chic, it can be even more crazier than the main game. You’re Chuck: a guy trying to study in college with an addiction to a drug called cope acting as his biggest challenge. The more cope you smoke, the weirder everything becomes. You’ll watch TV shows featuring a talking skateboard and a man known as Appleman who shoves apples up his arse, attend classes where you turn into horses and eagles whilst searching for jeweled skeletons and have some pretty fucked up hallucinations. It’s just as enjoyable as the main story, but it can become laborious when you don’t seem to be getting anywhere with your studying.

One Way Trip is a lucid trip into a hallucinogenic playground, its peculiar and random appearance should act as a caveat to anybody wanting to give it a go because it is only going to appeal to those with specific tastes. The music can be off-putting, especially when there’s important decisions to be made, but there’s some really great hip hop and acoustic tracks on the soundtrack. I personally loved it and would recommend everyone at least try it, but I can’t imagine many won’t stick it out until the end.

Although the story may be a bit too bizarre for some, the character relationships, dialogue choices and overall effort put into the story makes the game interesting and engrossing.