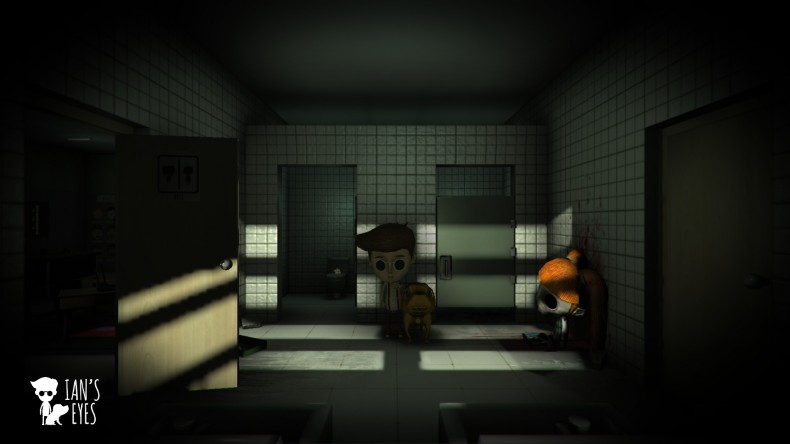 Protagonists can come in many different shapes and sizes, all with various abilities and quirks, but I’m fairly sure I’ve never played as a visually impaired 8-year old boy before. It’s a nice idea by Sindie Games, but the stellar subject is clouded by poor camera angles, irritating voice acting and scenarios that are made difficult for all the wrong reasons.

8-year old blind boy, Ian, must try to fit in at Blue Norholm, a school located in the northern US town of Wintreal. Thankfully, he has his trusty canine sidekick and best friend North to give him a helping hand. After a short time getting used to the controls, you begin to realise nothing is as it seems and the eerie school is overrun by creepy kids with bright white eyes and a penchant for grabbing you and your dog.

The look is similar to some of Tim Burton’s illustrations, reminding me of his 1997 poetry book, The Melancholy Death of Oyster Boy & Other Stories; it’s an interesting art style that makes the weird adolescent ghouls that little bit weirder. The school itself is detailed and the classrooms and hallways are filled with posters and student work similar to the stuff you probably had draped on your school’s walls as a kid. The halls are filled with the occasional spattering of blood, and the screams and strange noises emanating from the darkest corners of the school help to make Blue Norholm an eerie and uninviting place. The controls are straightforward enough and for the majority of Ian’s Eyes you’ll seldom struggle with them. North can run off and scout the different areas before using his abilities to guide Ian through the school. You can run to evade the children, or you can sneak past them using stealth to make sure you don’t get grabbed. The barking mechanic helps to draw enemies away and by using all three successfully, North can make sure Ian doesn’t suffer a nasty fate. The puzzles can be challenging at times, but are made so much harder due to some poor camera angles and the placement of many of the young antagonists.

Most of the areas of the school are big enough to move through, but some areas feel too cluttered and compact. The fixed camera makes things even harder, and ends up being a downright hindrance. The school has kids hiding round every corner and as you walk into the next area, you’re grabbed instantly without ever having a chance to escape. Some of the enemies are too quick to react, and when you throw all these annoyances together it can be a real pain. Moving from one section to the next shouldn’t be as tough as it is, and when in a panic, Ian’s Eyes does nothing to appease the frustration. Some of the voice-acting can be really off-putting. The narrator and Mr Bates in particular have no personality whatsoever, and it sounds like the script is being read out by someone who isn’t even trying to act. Ian himself is whiny and annoying, and although he reminds me of Morty from Adult Swim’s Rick and Morty, I can’t cope with the sheer amount of times he repeats specific lines of dialogue, especially when you get grabbed and respawn at the point he was talking at – it becomes a real issue and detracts from any enjoyment. Ian’s Eyes is a horror game essentially, but these problems break the mood and the tension it struggles so hard to build.

There are some good ideas here, but with the bad voice acting, tricky camera angles, imbalance of enemy reactions and abundance of kids in cramped spaces, I didn’t enjoy it as much as I could have. I also suffered from a couple of crashes meaning I had to restart at some crucial moments, and these issues put the final nails in the proverbial coffin.

The nice art style is let down by some bad camera angles, weak voice acting and unbalanced environments.