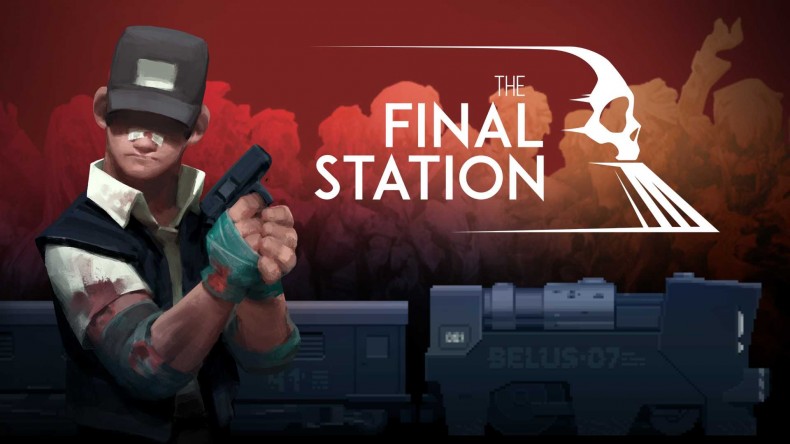 The Final Station is an interesting game, one that has an overwhelming sense of inevitability and futility about it. It’s a simple game, with a high concept wrapped up in mystery and revealed slowly as you progress, but with gameplay mechanics that ultimately stutter a little towards the latter stages.

Presented as a 2D, side-scrolling pixelated world, you are a train driver and sometime engineer in a grey, dystopian, industrial location where resources are scarce. It is clear from the very beginning that something has gone wrong in the past in this world, as the visual clues indicate a society currently struggling with rationing and labour in exchange for basic needs like accommodation and food.

Thematically, it’s faintly reminiscent of Papers Please, the enormously successful indie game from 2013 – at least from first impressions. You’re a downtrodden worker in a decaying society trying to fulfil your duties to the best of your abilities for whatever meagre reward you can earn. And for the first few levels this appears to be the game: managing elements on your train to keep it moving onto the next checkpoint, picking up items to sell or trade at the various stops you arrive at, helping various passengers to stay alive with food and medicine, as well as trying to locate the code to proceed onto the next stage. It is really not clear what is happening, but as you progress you pick up visual clues and little pieces of information that help you start to piece together what has happened in this place. The Final Station has two distinct parts that find you either on foot exploring deserted locations for items, or on your train carrying out busywork to keep it moving and your passengers alive.

Gradually, the tension starts to ramp up. The backgrounds that your train passes through indicate that something terrible is happening, and the increasingly deserted and eerie locations soon give way to frantic gauntlet runs trying to find the items you need to move on. Dark, shadowy figures try to attack you as you wander around the areas on foot searching for the next code, and any bullets or food some hapless stranger might have left in a locker.

Enemy types aren’t particularly varied: there is a slow, shambling figure, a faster, smaller creature that leaps and bites at you, an armoured type that needs to be punched to remove its helmet before you can shoot it in the head, and an exploding type that needs to be taken out from distance. Like most zombie type survival games, no one enemy is a particular threat, but encounter more than two and you could find yourself in trouble very quickly. As bullets are a very finite resource it is best to keep these for as long as possible; instead, you can take out enemies by chucking chairs, boxes, or even toilets at them, but these two are sparse and every encounter needs to be weighed up. Thankfully, there is a fairly generous checkpoint system that doesn’t punish you too much should you find yourself overwhelmed and very much dead.

At each stop there are opportunities to gather more valuable resources should you wish to run the risk of exploring more. You might find a new weapon, more crafting materials, or another survivor, but at times the annoyance of multiple enemies (despite the generous checkpoint system), means that just finding the code to move on and return to the veritable safety of your train is more favourable than punching your way through them.

The people you find in each location can be sent to your train and will be in the carriage when you finally return to it with the code to move on. They talk amongst themselves and through their dialogue you can begin to piece together more elements of the mystery. The train sections become a little rote after the first few, with tasks that feel a little too much like busywork to keep the train moving (pull a lever here, release some pressure there, etc…), but success is rewarded with much-needed items when you finally get your passengers to their destination.

The Final Station is deliberately obtuse with its storytelling and to its credit keeps you engaged until the inevitable finale. It is an interesting take on the themes of survival and dwindling hope, despite not ever really knowing or understanding what you’re running away from. Managing to keep the suspense going for most of the run time is admirable, but after the initial introduction to the enemies the overly-repetitive gameplay does start to wear thin.

The Final Station has a great deal of promise, but repetitive gameplay elements can be tiring.