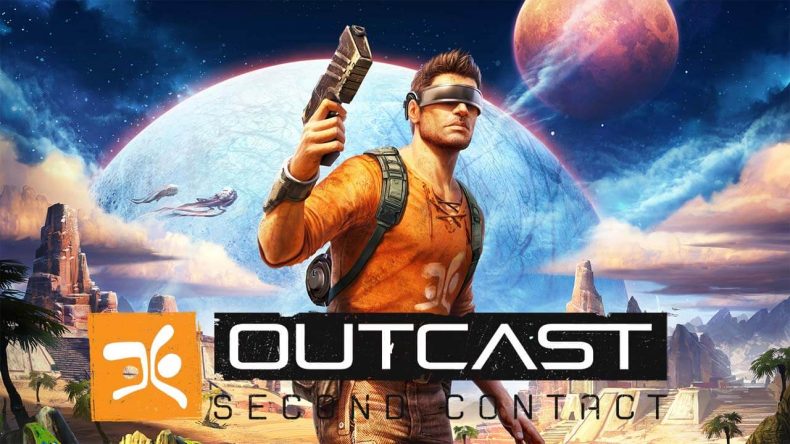 Outcast’s original 1999 release is credited as being one of the first open world games. Its mix of exploration and 3rd-person combat was something that felt new at a time when more linear adventures like Tomb Raider were everywhere.

The re-up, subtitled Second Contact, adds some interesting features, such as a rudimentary stealth mechanic, and vastly improves the visuals, but a fresh coat if paint can’t mask some heavily dated gameplay.

You play the role of Cutter Slade (and if there’s a more 90s name for an action hero than that, I’ll be surprised), a hard-drinking, tough-talking professional soldier recruited by the Government to accompany an exploratory team through a Stargate-riffing portal to another world called Adelpha. It doesn’t start off too well, as the opening cutscene is fairly hard to watch. Disembodied voices play over static images resembling stylised paintings. Suffice to say, in 2017 there are better techniques available.

Obviously, the mission goes horribly wrong, and Slade ends up separated from the team, his equipment scattered, nursed back to health by the Talan, an alien race locked in a bloody civil war. Quickly striking a bargain, Slade heads off to gather his gear, find his team, and help the Talan overcome their tyrannical oppressors. You find all this out through conversation, of which there is a lot. Irritatingly, the dialogue isn’t skippable, and some of it is a little dull. The world looks pretty good. It’s a little empty by today’s standards, and the detail doesn’t hold up to close scrutiny, but they’ve done a stirling job of re-texturing the environment and adding depth and atmosphere. Character models are as good as you’d expect: perfectly fine when stationary but losing something in motion. Slade’s movement is a little clunky, and as a result the platforming feels off. Likewise, swimming in the (admittedly lovely-looking) water doesn’t feel as smooth as it should.

Spread across six fairly huge zones, Outcast: Second Contact combines free exploration with story objectives instead of missions, but it’s not always obvious where you need to go. Usually, following a path or chatting to NPCs will lead you where you need to go, but it’s a bit frustrating given what we’re used to in modern games. It’s almost like mutton dressed as lamb, and it’s a sense that runs through the combat, too. The auto-aim is a stubborn, bloody-minded beast, but turning it off makes it hard to hit anything. You’ll get used to it eventually, but it takes some time.

Outcast: Second Contact is a classic adventure wrapped up in shiny new clothes, but which maintains everything it was born with underneath, for better or worse. As a nostalgiac buzz it succeeds, but if you never experienced the magic the first time around you’re unlikely to feel it now. Improved graphics can’t hide archaic systems and clunky animations, even if the world does look lovely now.

Outcast: Second Contact is a classic adventure wrapped up in shiny new clothes, but which maintains everything it was born with underneath, for better or worse.