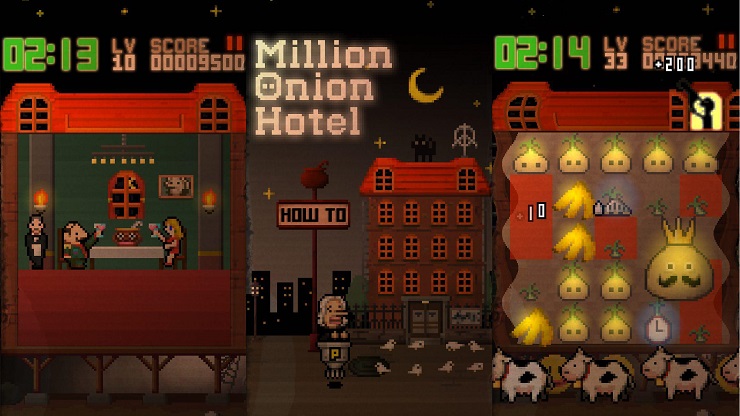 Over the last few years, I’ve been playing a lot more on my phone and iPad. There have been amazing ports of previous generation big budget titles and indies releasing at the same time as their PC versions. It has never been a better time to get into iOS gaming and the latest game I’ve been putting my time into is Million Onion Hotel. Onion Games’ Million Onion Hotel has been in development for a while and it finally released earlier this month on iOS and Android devices worldwide.

I actually first heard of Million Onion Hotel through the English Twitter account for Onion Games that started Tweeting like a sentient onion. Fast forward to today and the premium game is well worth your time and money. Right from the get go, you’re greeted with some lovely pixel art visuals and smooth animations that immediately scream polish and eccentricity to me. The story which has its own charm involves a strange hotel that has a Magical Onion Soup. People from all over visit to try this and the story involves dinner, murder, and more hilarious things that will definitely make you smile when coupled with the fantastic and batshit crazy gameplay taking place on your portable device.

The main gameplay here is like whack a mole with a strategic element. You start out tapping onions and will end up with various fruits, cows, bells, and even hearts showing up. Once you’ve cleared a square, it is highlighted red and your aim is to get doubles or better which requires you to clear two lines on the grid at one time or more. The 5 x 5 grid gets pretty crowded with background animations, a ton of different sprites and items, and it definitely is a sight to behold. There are even boss fights that require onion knights to take down the boss’ health bar. There’s also a timer on the top left that is counting down and you need to collect items to give you a time boost often. I struggled initially because I kept tapping any onion that became visible like a whack a mole game instead of planning doubles and more.

Visually the direction of Million Onion Hotel can be best summarized with two words: retro eccentricity. While there’s a lot of pixel art and some great sprite work here, the bit that impressed me the most is how well everything is animated. Even with a ton of stuff happening in the 5 x 5 grid, there is a lot more happening on the screen that makes this feel like you’ve actually had a sip of some magical onion soup while playing. The story segments in between different levels so to speak are hilarious.

There are a ton of puzzle games on mobile devices, but few manage sticking out and being as memorable as this one. The sounds when you tap at various things on the grid are charming and there are some sounds done by voices that are even better. I’ll never get tired of the calming music when you tap at onions that go “hum hum”.

The only downside here is I can’t imagine many people will want to replay it after seeing through the main story. There’s stuff to unlock and I enjoyed trying to top my own high score and checking out what people I follow were doing in game on Twitter, but this is the only negative to an otherwise wonderful experience. Instead of spending November complaining about AAA games, take a sip of the magical onion soup. You won’t regret it. Million Onion Hotel is available on iOS and Android for £3.99.