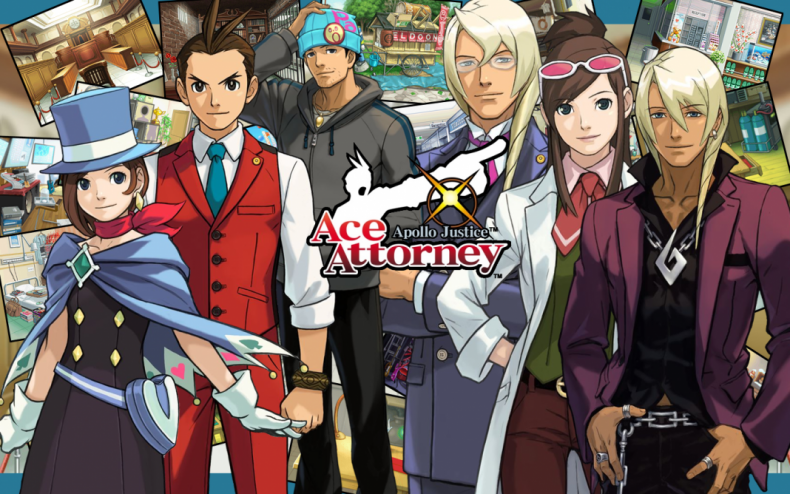 When I originally got a DS all those years back when the system got its first redesign, Phoenix Wright Ace Attorney was one of the first games I got. Nobody in my family quite saw what I did in the game, the high drama, the sensational twists, the sheer ludicrous nature of the cases, the music; it was just a great package. I followed the series through Justice for All and Trials and Tribulations, I just couldn’t get enough of Phoenix (or Nick as he’s nicknamed).

When the series went a bit Metal Gear and dropped it’s main protagonist for Apollo Justice I still went with it, the new gimmick of looking for people’s ‘tells’ – a behavioural trait that gives away when they’re lying – fitted in well with the series usual shenanigans, but I never did warm to Apollo, or the way the writing team recharacterised Wright as some sort of stout law genius considering his way of bumbling through and stumbling onto answers. But, following on from the remaster of the original three Ace Attorney titles, Apollo’s game has been redrawn and re-released onto current systems. But what has changed?

Not a lot really, is the answer to that one. Unlike the previous trilogy re-release on 3DS the art has been recreated in considerably higher quality. Sprite work is well defined and yet still feels true to the original. Animation is now much clearer, which makes spotting those all important tells when court is in session much easier. Thing is, there’s something a little too clean about the art now. With Phoenix’s trilogy there was a degree of pixelation which gave the impression that the art was that of the original, here it’s solid shades and curved outlines. It’s nice, but it just lacks charm. The less said about our old friend the Judge’s up close and personal view the better. And, that’s all that’s truly different. Apollo’s story was never one of the better Ace Attorney tales (if anything, making his story front and centre for Spirit of Justice let that game down considerably as well), and as a result this suffers from it’s own sins. The opening case is overlong with too many recesses, the tale of Eldoon’s wagon and Wocky the Yakuza kid is still tedious and the final case has so many ridiculous logic leaps that the end comes as a sweet release rather than feeling like an accomplishment. That said, this is a game that gave us the brilliant Trucy Wright with her magic panties and the indomitable Klavier Gavin who gives coffee drinking Godot a run for his money. But there’s no real standout character in any of the cases, and in a game like this, engaging characters are a must.

If you’ve never played an Ace Attorney game before you should know that the game follows a two-part process, investigation and court. Investigation has you collecting clues the police have somehow managed to miss so you can build a case to defend your client, while court has you putting the evidence to use, using it to point out inconsistencies between witness testimony and what the evidence list says. It’s here that veterans and newcomers tend to get frustrated as the game wants you to submit evidence in a particular way or fashion. There’ll be many a time where you’ll spot an infringement yet because it isn’t the right time to produce that part you’ll be penalised for it. There’s a certain degree of trial and error (sorry), but with a ‘five strikes and you’re out’ system you’ll not really have the luxury of playing about too much before you have to produce the goods.

Apollo Justice just reminds me of Metal Gear Solid 2, a great series, wrested away from a loved protagonist for an unlikable child. I don’t want to sound too down about the game because I love the series. Even this entry despite all its missteps has it’s place. The thing is, as I said earlier, it’s easily the weakest of the Ace Attorney titles and as a result it’s difficult to welcome this remaster when The Great Ace Attorney still hasn’t been localised for the West. Granted, brand new copies of Apollo Justice are hard to come by, so remaking it for current audiences, and to help people finish their collections makes some kind of sense, but even still this just feels pointless.

If you’ve been struggling to get an original copy to finish your collection, then this remaster will answer your prayers, but it’s hard to recommend Apollo Justice for any other reason.