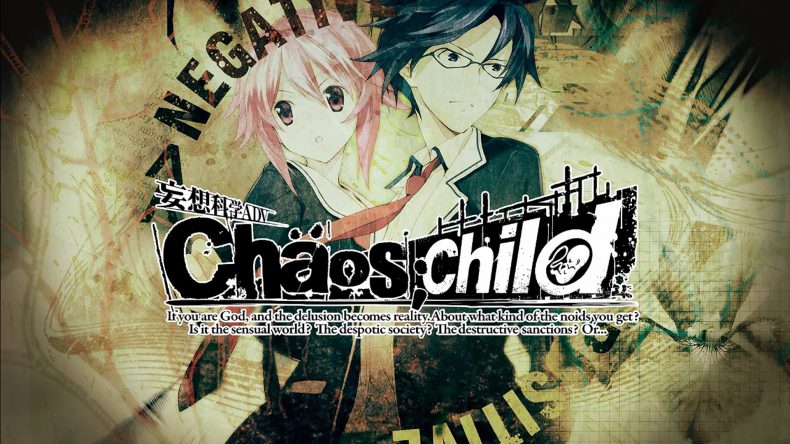 Over the last few months, I’ve learned two things. The first being that MAGES and 5pb.’s Science Adventure series maybe one of my favourite ever in any form of media. The second is to not try and play a visual novel while reviewing a ton of other things. Chaos;Child was released in English from PQube little over a month ago and they have become one of my favourite publishers with visual novel and niche localizations. Some released do have errors though. Chaos;Child has seen patches fixing some of the issues, but still isn’t perfect in the localization department. Thankfully, my time spent with it on both PS4 and Vita has been amazing and the wait has been well worth it.

While a cursory glance online will point you to Chaos;Child being a sequel to Chaos;Head that released in 2008, you don’t need to play or have played that to enjoy this. Chaos;Child’s release across the world has been interesting. It began as an Xbox One exclusive in Japan before eventually getting ported to PlayStation and mobile platforms. The English release is limited to PlayStation 4 and Vita. This review will focus on the Vita version even though I did spend time on the PS4 version as well. Both Steins;Gate and Steins;Gate 0 are brilliant stories with excellent characters. Chaos;Child follows the same path, but has a bit more of horror and fan service. After a strong opening where you experience death when you least expect it, you learn about the characters and how they are all part of a larger narrative. Set in Shibuya, years after an earthquake, you play as Takuru who is in a high school newspaper club. Shibuya has settled years after the earthquake and murders start taking place. As expected, the murders are all connected and this is where the story begins.

While many visual novels offer a branching path depending on the choices you make and put you into different ending paths, Chaos;Child handles things a bit differently. There’s a delusion trigger mechanic that will change your ending based on whether you react positively or negatively in the delusion trigger moments. The first playthrough will force you into a common ending. Once this is done, you have the option of getting into an individual character ending. Once all the character endings are done, you get to play for the true ending route. This ensures everyone experiences everything the game has to offer but may turn off many. While I somehow managed putting in 50+ hours into Steins;Gate to get the platinum trophy before reviewing it, Chaos;Child is much longer. Basically it takes a lot more time and effort to get the true ending here compared to Steins;Gate.

This past year has seen some really interesting takes on visual novel art and animation. Collar x Malice is definitely my favourite looking back at the year’s releases. Chaos;Child has a lot of great background and CGI art along with some really nice character designs. I’m not a fan of some of the character portraits though. They feel oddly out of place. The interface and font choices are all very well done and just great overall. Chaos;Child actually looks good on both the PS4 and the Vita and never feels like an upscaled handheld game on the big screen. Kanaka Itō’s vocals in the opening immediately made me smile and it does feel great to play another visual novel with her doing the opening. The rest of the soundtrack is very nice and fits with the themes and narrative here. Takeshi Abo returns as a composer and his amazing music makes its presence felt right from the title screen that has a lovely but sinister melody. Voice acting is almost consistently great overall.

The big issue here outside of the length for the true ending is in the localization. While some of the issues have been fixed in patches, I wish PQube and 5pb. spent a bit more time on QA when it comes to the text and localization in general. I’m glad that they localize these releases on consoles in the West but these games deserve better. If you’re a fan of Steins;Gate, this is an easy recommendation. If you aren’t, get that and this. Chaos;Child is a brilliant visual novel with a memorable story and characters.

Might be too long for many
Some text errors

Chaos;Child is another fantastic entry in the Science Adventure series from MAGES and 5pb. that is a must play for visual novel fans.

PQube is localizing the visual novel Chaos;Child on both PS4 and Vita