Planet of the Eyes Console Review 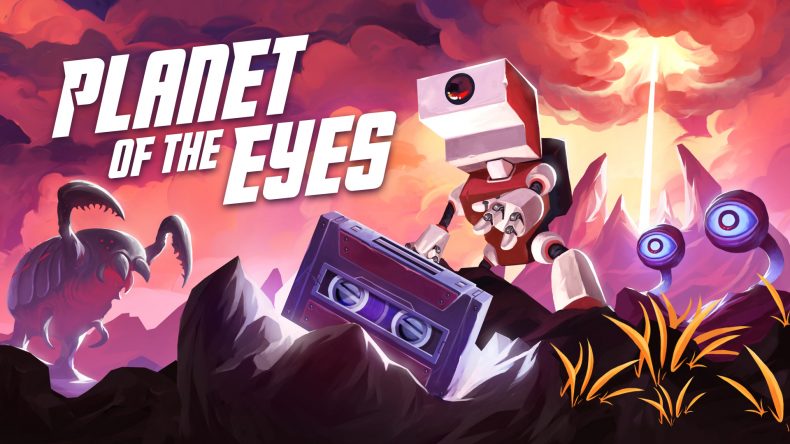 You awaken from a crash-landing on an unknown planet which, remarkably considering the game’s title, doesn’t feature that many eyes. You are a little robot that can do very little other than walk and jump and surprisingly for a thing made almost entirely of metal, swim also. But these questions fade as you realise there are far more pertinent questions that need asking. What is the point?, and is anything going to happen?

Planet of the Eyes isn’t a bad game by any stretch, in fact it is quite a pleasing diversion for a couple of hours, it’s just that there is nothing really memorable about it. It is a serviceable sci-fi puzzle platformer with a stylish aesthetic reminiscent of Limbo, but in colour rather than the monochromatic style used by that game. You control your little robot by moving it from left to right, occasionally you will jump over obstacles or onto levels at different heights. Death will come frequently, but the game communicates its perils very easily with bright red and oranges for lava, reds for lasers, electric eels in orange etc.. Furthermore, there is an incredibly forgiving checkpoint system that doesn’t punish you for making mistakes which will be fairly frequent. The platforming is fairly straight-forward with nothing requiring the reflexes of highly-strung cat, rather the focus is more on puzzles to impede progress. Some of these are more obtuse than others, but in truth there is nothing that will slow you down for long. Some of the more interesting obstacles take the form of huge alien creatures that you will need to work out how to navigate around, but sadly these instances are in short supply which is a shame because landing on an alien planet I’d expect the flora and fauna to be trying to constantly kill me. As it is there is very little peril other than mistiming a jump and plunging to your death.

The story of why you are there is told through a number of audio-logs that you find along the way. These are from your “creator” and are wonderfully narrated. They tell the story of a man who seemed desperately lonely and who, towards the end, was overcome with despair at his situation. Along the way he fills you with more information as to why you have been created and what you were ultimately created for. It is well told, but ultimately becomes background noise in a world that is empty and devoid of character, and even upon the reveal at the end section it all feels a little bit wasted – why create an atmosphere through the audio-logs, when there is none in the environment? Planet of the Eyes is a competent puzzle platformer; it is short enough to be played in one sitting, and entirely possible to do so as there is nothing particularly challenging in it. It tries to create an atmosphere through the introduction of the audio-logs, but the world in which you inhabit feels sterile and entirely non-threatening. Some late game jumping puzzles can cause a bit of frustration with the difficulty spiking a little towards the end, but the checkpoint system saves it from ruining the experience entirely. Ultimately, for a title called Planet of the Eyes I expected something a little more menacing and eerie, but as it is it is a pleasant, fairly relaxing journey that doesn’t really leave any lasting impression.

Planet of the Eyes is a competent puzzle platformer, short enough to be played in one sitting, but with a sterile and empty world it fails ultimately to leave any lasting impression.

15 Minutes of Game: Planet of the Eyes