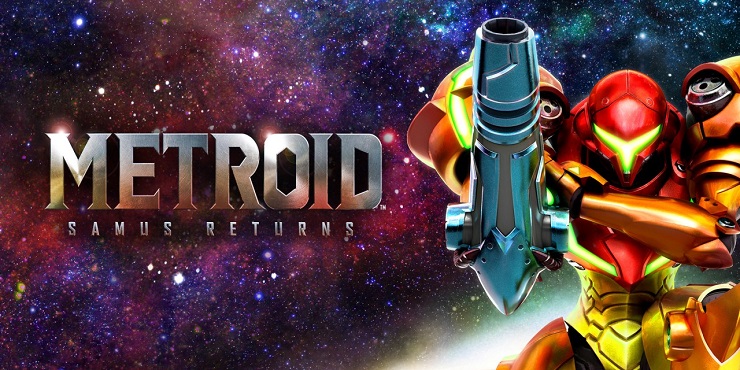 I came into the Metroid series pretty late, despite owning a Gameboy, a NES and a SNES it wasn’t until the Gameboy Advance and Metroid Fusion came out that I finally took control of Samus. It’s safe to say that I enjoyed the game so much that I then dipped into Metroid Prime on the Gamecube, which I didn’t enjoy (sue me), but then I played Metroid Zero Mission and liked that. I think it’s safe to say that I enjoy Metroid in two dimensions.

Aside from virtual console releases of the old games we haven’t seen a 2D Metroid title for a while, but here we are with a halfway house, a 2D game, albeit a remake of the Gameboy’s Metroid 2, and the reason why the fan-made AM2R (Another Metroid 2 Remake) was issued with a cease and desist. So, what’s this official remake of Metroid 2 like then?

Let’s deal with the obvious thing first, it’s ugly, sorry to be blunt, but it is. The trailers have been carefully chosen snippets of Samus in badass poses and the game framing it’s (admittedly excellent) action in the best of lights. The thing is, for every one of these segments there’s a janky looking close up full of muddy textures, grim brown environments and transition segues where the frame rate drops to silly low levels despite not much really going on. So much of the game is spent staring at varying shades of brown it’s easy to forget the moments where the game bursts with colour. Some locations have a lovely purple hue, give an excellent impression of verdant beauty and are host to sublime background details, but those moments are easy to miss as you’re often moving fast enough to not notice. It’s obvious really that the 3D models that are being used lack the charm of the sprite work of the SNES and GBA games, it’s obvious why they’ve gone with this aesthetic, but it just doesn’t look very nice.

Ok, with that out the way let’s do what we need to do and give the game the praise it deserves, it’s excellent. MercurySteam have done a sterling job of building a cohesive set of adjoining locations for you to move between; it’s all brilliantly judged with each point being obvious in telling you whether or not you can progress and as such funneling you elsewhere, keeping you moving and not leaving you stuck for somewhere to go.

In pure Metroidvania style it’s possible to overlook something or forget a point you were at previously, but the bottom screen is an ever present map and HUD display giving you the information you need at all times. The map can be enlarged by pausing the game, and while you move it about to see places you haven’t been to yet you can drop pins to mark places of interest that you think you’ll want to revisit later. A lot of places are optional, so you’ll probably want to drop them like they’re going out of fashion.

Power ups are distributed exactly when you need them, with each one giving you that ‘eureka!’ moment, prompting you to quickly pop back to the map to see where you’re new toy can possibly be put to use. You scan around plotting how you’ll nip to the nearest teleporter, go up the lift, travel up and across several rooms before going through a door that had been taunting you a couple of hours earlier, it’s great stuff. You’ll feel more and more powerful with each new ability too, but the game never wants you to get carried away and changes up boss behaviour regularly to try and catch you on the hop. Your first encounter with new Metroid types will certainly be learning experiences as their attack patterns differ so much from the prior ones. Each can be easily beaten when you know how though, with losses more being down to lapses of judgement than an attack you just didn’t expect.

The way Samus moves has been judged perfectly as well. Platforms are placed just right so that they meet the apex of her jump, and it’s all designed to teach you how you should traverse the areas, to the point that there will be times when muscle memory kicks in and you’ll reel off a set of moves one after the other to get through a segment then wonder how exactly you managed to pull it off. MercurySteam have really done a great job in building a world for Samus to move through.

It really is good to be back in a 2D Metroid game, and while the aesthetic isn’t really attractive the core gameplay is as good as it has ever been. There will be many who aren’t happy about this, as this game’s existence brought about the end of AM2R, but MercurySteam’s effort deserves an audience built of Metroid fans and newcomers, after all, if you’re looking to get into a series then you can’t do much better than jumping in at the (near) beginning and this is an excellent way to spend your time while you wait for Metroid Prime 4.

An excellent reimagining of an age old title, it’s great to see Samus back after such a long hiatus, please don’t go away for so long again.