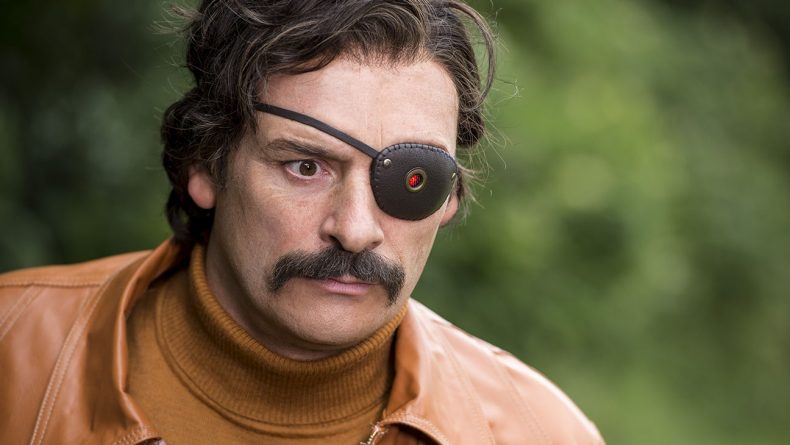 It’s probably safe to assume that most people know of Julian Barratt for his voice. Some people just have that kind of voice, don’t they? They’re just funny, whether it’s intentional or not. Matt Berry is another one, and his pal Julian Barratt has done way more than you’d realise. Those that know his face, will forever hear Howard Moon, from The Mighty Boosh (co-created with Noel Fielding, now of Bake-off fame), and in some ways that role has defined him, though I actually think that’s unfair.

Not to make this a review of Barratt’s career, but those who aren’t a fan of his comedic style would do well to check out Flowers, a sitcom (more sit, than com) where he plays a depressed father in an unhappy, strained relationship. This guy has range – way more than he’s credited with, and he has the ability to move you.

Mindhorn isn’t that kind of flick, though. Not at all.

Co-written with Simon Farnaby (another underrated British comedian, whose role here is played beautifully and almost steals the show when he’s on screen), this is a film about a TV show that is very, very late 80s. We’re talking borderline Darkplace style, where the women are eye candy and the men are brutish oafs, just there to solve the crimes and get the girl. Mindhorn was experimented on, had his eye removed, and can now “see” the truth in people, hence the Mind part. The horn is just… well, Christ knows, actually.

Set in the Isle of Man, there’s a serial killer on the loose who will only speak to Mindhorn. Richard Thorncroft is an out of time, out of work actor and thus jumps at the chance to “star” as Bruce Mindhorn (and I’m almost certain “mindhorn” was an early Boosh joke, come to think of it), but mostly because his ex-co-star and old flame is still living there, and he very obviously still thinks he’s in with a chance. Like many of Barratt’s roles, Thorncroft is a desperately hopeless man who, deep down, knows he’s a fat, washed up old waster, but puts on a show that he’s still virility incarnate.

There’s depth to the characters, and some nice moments, but this isn’t a movie you’ll remember your whole life. Fans of Barratt will recognise many of the gags, though his interplay with Steve Coogan is terrific, and, as usual Coogan is excellent whenever he pops up, ably playing an absolute sleazeball. The best gags are the ones you don’t see coming, and while I wouldn’t spoil them here, it may not be a laugh a minute, but it is funny, which is more than you can say for many “comedies” these days.

You’ll see most of the twists coming, but the surrealist nonsense is what will keep you watching. Russell Tovey as “Kestrel” is a joy, as he completely gives himself to the role. There is pathos and darkness in the comedy, and there isn’t a performance out of place, but it sometimes feels a bit rushed. I wanted more of Mindhorn, and oddly, it feels like it would make a cracking TV show, with more room to breath and develop the characters.

It’s worth mentioning, while the blu-ray extras aren’t phenomenal, there are a few shorts with Farnaby and Barratt in them that are well worth a watch. The commentary and featurette are also a nice inclusion, but it’s mostly standard stuff.

Not a home run, nor a masterpiece, but a good way to spend an hour and a half, and let’s face it, anything with Barratt, Farnaby, and Coogan in is well worth a watch anyway.

Julian Barratt
The Isle of Man

Not a home run, nor a masterpiece, but a good way to spend an hour and a half, and let's face it, anything with Barratt, Farnaby, and Coogan in is well worth a watch anyway.

This Spider-Man: Into the Spider-Verse trailer gets our senses tingling