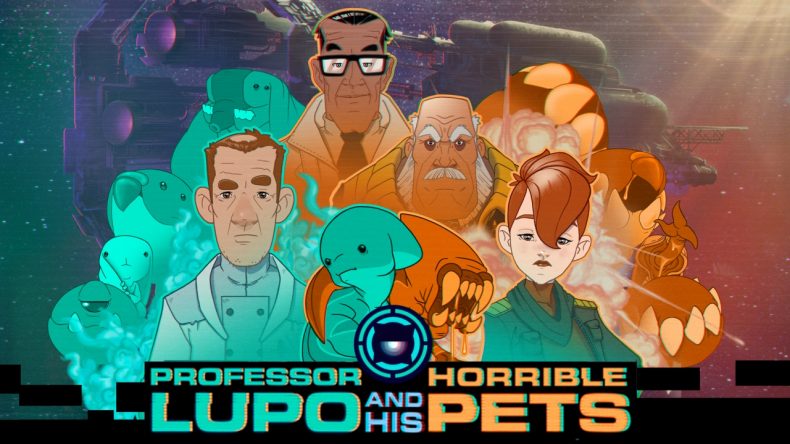 Goldfish, cats, dogs, hamsters, mice, parrots, budgies… I’ll start by telling you that you won’t find any of these things in the world of Professor Lupo. The ‘good’ professor is looking to offload some of the deadliest creatures the galaxy has to offer. So, in brief: a mad professor, a space station and a host of deadly creatures – it’s science-fiction horror waiting to happen.

But here it isn’t; here’s it’s a puzzle adventure game with you as Professor Lupo’s intern named… Intern. Intern goes about his time on the space station acting as bait for the creatures to get them to where they’re needed, but when Lupo is hawking his wares to some of the most dangerous despots on Earth the space station finds itself attacked and Intern must navigate the collapsing corridors avoiding the killer monsters in his path.

The creatures are an appealing lot, as cute as they are monstrous and deadly, and each follows in its own particular pattern. Learning the habits of the creatures is important as knowing what actions will make them move how you want is the only way to get by them. Thankfully in the game’s pause menu you can read about the individual creatures to figure out how best to formulate a plan and move with it. The Furax,for instance, will always move to the closest food source, as long as it is safe to do so, while the Vermis move like the snake from the old Nokia game but cannot turn around in a narrow corridor. As you go on you’ll encounter more monster types and they only increase in their danger levels. Early creatures would find themselves blocked by doors, but a later enemy can smell and follow you through doors, but will follow the path your scent takes allowing you to dictate how they move. Much later the Furax learn how to operate terminals, further complicating your abilities to create safe paths to the exit.

The Intern seems to have spent a long time around these monsters and as such seems a little bit too casual about the danger they pose to him. His movement speed is nothing more than a brisk walk, which makes knowing how the creatures move ever more important because most of them move quicker than you do. The Intern can interact with terminals to open doors or turn off environmental hazards, and this is mixed up with doors that are timed and others that either have to be operated by standing next to them or operated remotely. In fact I can’t really figure out why some doors are remote operated and others aren’t, other than puzzle reasons alone.

In fact, once you understand just how they move most of the puzzles are a bit of a doddle, and to be honest it does feel good when they’re like that, but it does take a while to get to that point. Realistically it’s the end of the first chapter where you’ll start to feel like you’re actually starting to get to grips with how to manipulate the movement patterns effectively. For many people this might be just a bit too long, but persevere and things improve considerably. That is, until you get through to the home stretch and all of a sudden the wheels come off again. This all comes down to the game’s worst aspect – timing. Quite often you’re required to perform actions at particular times or you will fail, and while that in itself is no big thing the timing windows themselves are incredibly small and the fact the Intern struggles to move at a respectable speed, or even turn the right way a lot of the time, means you’ll lose many attempts due to fiddly controls rather than your own errors of judgement.

This issue with the timing is compounded further by the control system, more accurately the whole remote control and non-remote terminals. Because scrolling through remote interface terminals takes time, you’ll find yourself adopting a part button and part touch screen control method, contorting your hands into ungodly shapes as you go back and forth trying to move and shut doors as you pass them, all the while with a deadly creature bearing down on your location. Then there are the terminals that only work by local control and there’s like a half second window between your arrival and them being ready to accept your button input, which is hardly ideal when time is of the essence.

I always say the mark of a good puzzle game is when it makes you feel like a genius, and the ‘Ah-ha!’ moments in this do come, but you’ve got to fight past the opening to finally get there. The real problem with Professor Lupo isn’t that these moments don’t exist, it’s that when you’ve figured out the solution yet find yourself thwarted by fiddly controls and horrendous timing windows you can feel your attitude disintegrate extremely quickly. You have to wonder whether the controls are all part of the Professor’s machinations, because honestly, they’re way more horrible than the pets.

While not as horrible as the Professor’s pets, overly fiddly controls mar an otherwise decent puzzle adventure.