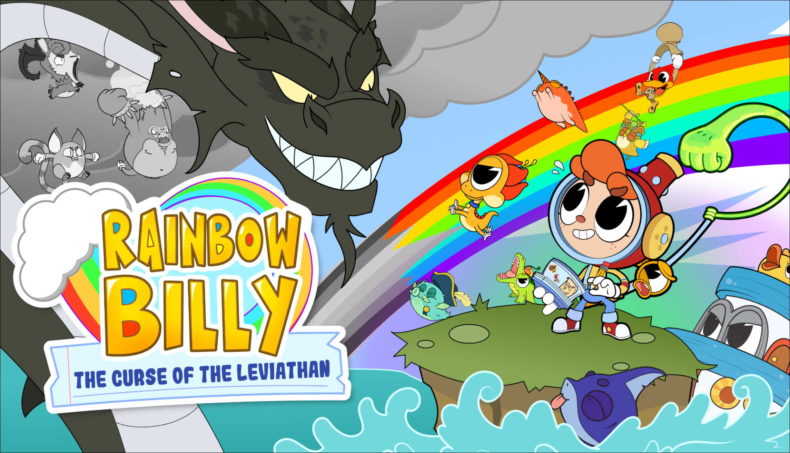 When times are tough and the world is bringing me down, I always fall back on video games. On a bad day the right game can be the perfect tonic to help you bounce back. Whether you need a colourful distraction like Mario or a Final Fantasy narrative to get lost in, if you love video games the right one will surely boost your mood. When I’m stuck in a rut I tend to lean into games brimming with positivity, letting the sheer joy wash over me. Last year the incredibly inclusive dating sim Arcade Spirits was that game, and this year it’s Rainbow Billy: The Curse of the Leviathan.

While preparing a lovely colourful festival for all the happy inhabitants of his world, Billy awakens Leviathan who curses the world and drains the colour from all the critters and islands. Our hero escapes the wrath of the huge angry sea beast by hopping aboard the Friend-Ship and using its rainbow fuel to sail away. With the help of talking fishing rod Rodrigo, his faithful one-eyed pup Giro and his boat buddy, Billy begins a quest to restore colour to the land using the power of empathy and positivity. 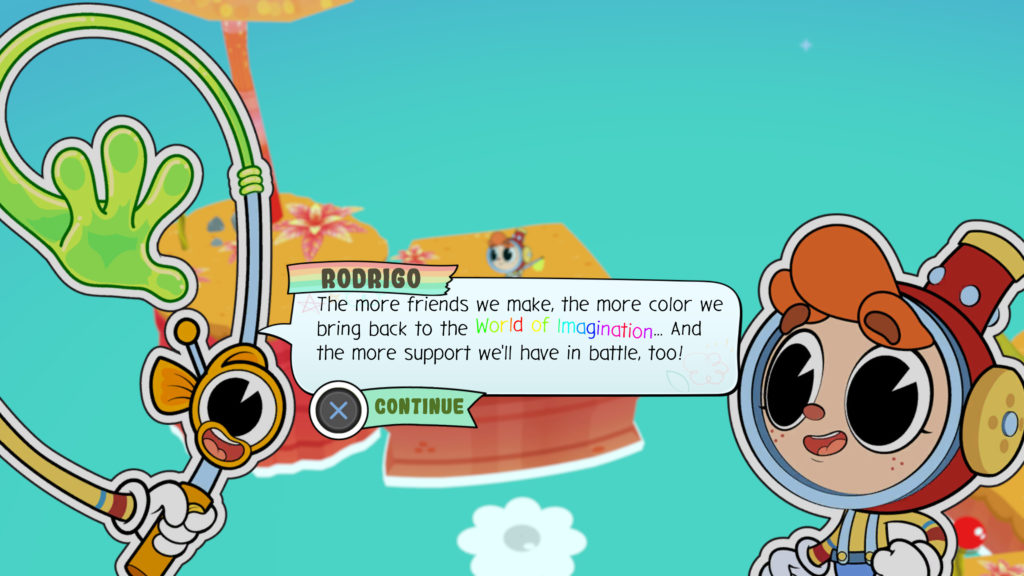 To reverse the curse of that dastardly Leviathan, Billy needs to gather 3 colour cores from across the seas. This means going through three themed worlds, making a bunch of new adorable friends and beating a big nasty boss by talking through its problems. There’s a real theme of understanding and helping one other running through Rainbow Billy, and it’s just lovely.

To recolour the adorable residents of the islands you visit, you’ll need to engage them in conversational “combat”. Each critter requires you to fill up a meter with different coloured symbols, and you learn which symbols to use by choosing the correct conversation options between turns. You might need to gently and supportively convince a dinosaur in an egg to come out of his shell, or explain to a big bully dog that you understand it’s only acting this way to protect its family. Figuring out what to say is rarely much of a challenge, but it’s a heart-warming way to battle and make new friends.

These battles are at their core card based. Each turn you’ll be dealt a selection of cards with different coloured shapes and effects on, which you can use a few of to try and calm down your opponent. When you “attack” with a card you’ll need to play a mini game for them to work to their full potential. These range from a rhythm game style button timing game, to slot machine and whack-a-mole style games. It’d be a really fun way to spice up the combat if these mini games were in any way challenging, but I’m not sure I failed a single one. 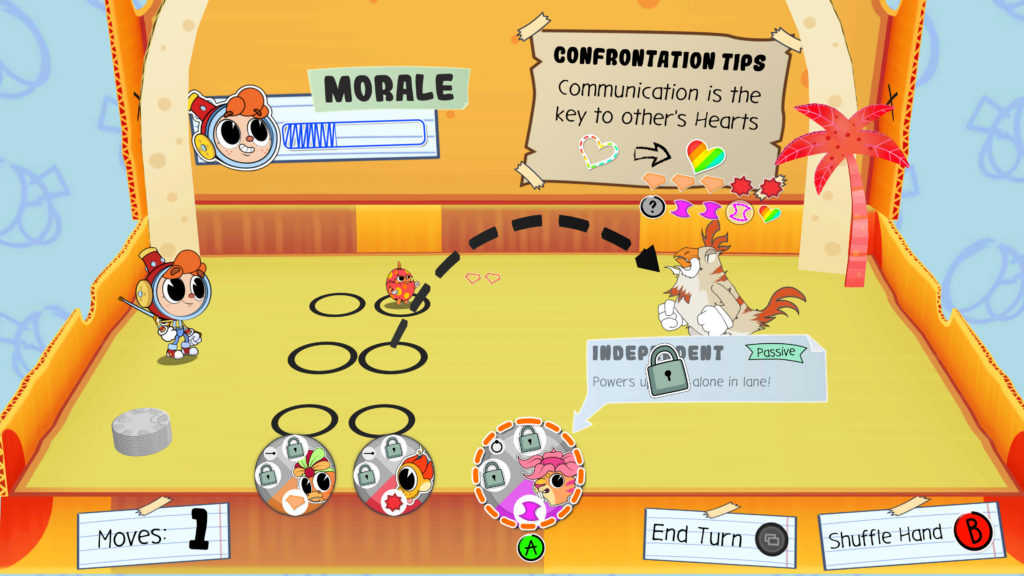 Outside of battling you’ll be able to explore different islands, with plenty of opportunity to find upgrades and collectables to help on your colourful adventure. There are little imp-like creatures called bad thoughts that you can put into a machine to get upgrades to your hand size or moves per turn. There are also plenty of coins for the shop, items you can give to your animal buddies to increase your friendship, and obviously gummy fish. Using Rodrigo you can fish for these sweet treats at special ripples in the ocean. The fishing is probably the most rewarding side activity in Rainbow Billy, and If you can dodge all the underwater spikes you’ll have all sorts of fish and items to share with your favourite dinosaur or manta ray pal.

It’s worth gathering as many items as possible for your collection of friendly animals, because leveling them up is very rewarding. Every time a member of your adorable army levels up, they’ll get a new coloured shape on their card you can use. They’ll also gain a bonus effect when played, which adds a much appreciated extra level of complexity to Rainbow Billy. Some friends will boost your morale bar (your health) when played, some will reveal extra coloured shapes, and others will summon their best friends to attack alongside them. Most importantly you’ll get to find out more about each critter as they level up, and will eventually help them open up about their biggest fear.

Alongside the RPG combat and positive vibes, you’ll also be expected to solve a few overworld puzzles and do a bit of platforming. There’s nothing particularly innovative about pushing snowballs along ice or finding the right switch to open the path ahead, but I enjoyed it all the same. The platforming is surprisingly deep too, with a triple jump that feels exactly how I wanted it to. 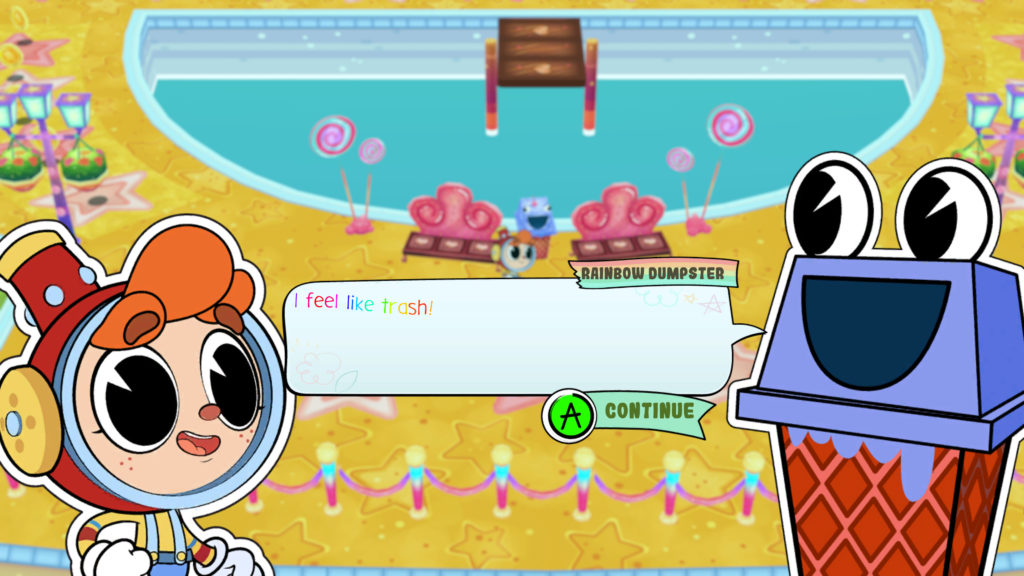 The art style of Rainbow Billy definitely deserves a shout out. Comparisons will be made to Cuphead, and while not quite as perfect as that visual delight there is a definite retro Disney vibe that really brings the world to life. As the name suggests, there’s no shortage of colour to worry about either. The vibrant environments and characters simply burst with personality, and it really suits the positive attitude of the whole game.

Rainbow Billy and the Curse of the Leviathan is a joyful breath of fresh air in a world that can be overwhelming. Whether you are in combat, exploring or giving gifts to your friends, the sheer positivity bubbles to the surface throughout. I’m certain that some will find the relentless happiness on display a little hard to stomach though, especially when coupled with the distinct lack of difficulty from start to finish. For younger gamers or those just wanting to escape from reality for a few moments, Rainbow Billy is pure rainbow magic in video game form.

Lack of challenge
Some will find it a little sickly sweet

Rainbow Billy is a positive and colourful adventure from start to finish, but the lack of challenge prevents it from reaching its full potential.