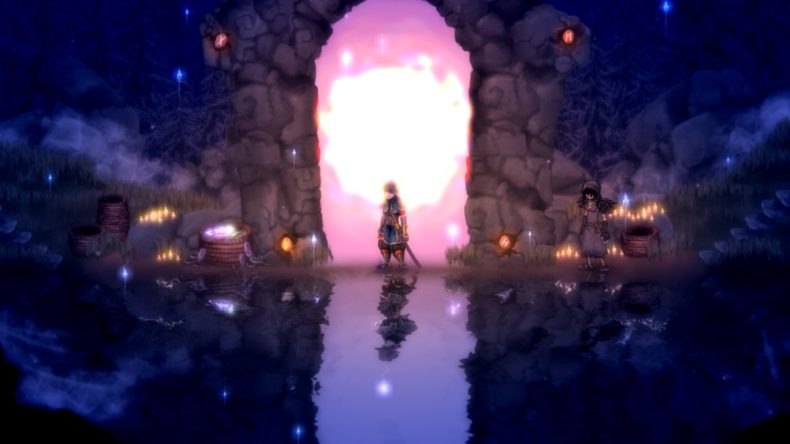 I still find it hard to believe that Ska Studios is just one person. James Silva has been making games for 15 years, including titles like The Dishwasher: Vampire Smile and Charlie Murder. But it was 2016’s Salt and Sanctuary that brought his studio the most attention. A faithful 2D translation of FromSoftware’s Soulslike formula it was equal parts side-scrolling platformer, Metroidvania, and challenging dark fantasy. The sequel, Salt and Sacrifice, could be considered more of the same, but that really wouldn’t be giving James Silva his due.

Salt and Sacrifice builds on everything its predecessor did. It’s a bigger game, more colourful, more detailed, and more challenging. It’s set in the Kingdom of Altarstone, where warped Mages are an elemental plague on the land. They corrupt or destroy everything they touch, including the King of the realm. So obviously the best way to deal with the problem is to throw drunkards, vagrants, and perverts at it until it goes away.

The Marked Inquisition is an organisation comprised of low-level criminals. Although, to be fair, none of the crimes seem punishable by repeated grizzly deaths at the hands of mages. Rather than, say, murder or genocide or writing the eighth season of Game of Thrones, they’re transgressions like vagrancy, alchemy, or sumptuousness (if that’s a crime, lock me up). Your choice of crime determines which starting item you receive (the arsonist has firebombs, for example), some of which have obvious uses and some of which you’ll need to work out. 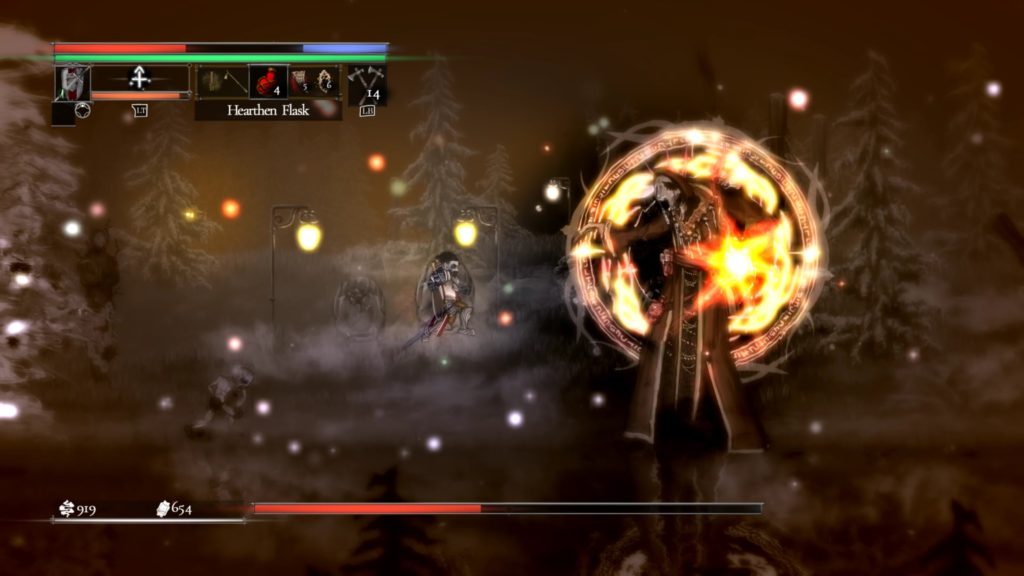 There are 8 classes to choose from, and this choice will decide your starting gear and stat spread. As in, say, Elden Ring, you’ll be able to change this as you go. Although you won’t get to assign points to individual stats with each level. Rather, your HP will go up each time, and you’ll receive a Black Starstone, which acts as a skill point to spend in the expansive Skill Tree. Here you follow tangents like constellations on a star chart, upping individual stats or unlocking proficiency with specific weapons and armour.

Each character has a melee and ranged weapon. The latter can be anything from throwing daggers to hatchets, bombs, a crossbow, or channelling rod. The former has a great selection, starting with the standard sword-and-board combo (here called “vanguard”) and going through warhammers, greatblades, maces, glaives, daggers, staves, and katana-like highblades. There are multiple elemental effects and attack speeds, and each weapon has a unique Runic Art attached. These use Focus or Rage to cast, and have effects such as magical attacks for staves, or the ability to imbue them with elemental damage.

A camp called Pardoner’s Vale acts as a hub zone where you can craft items, restock consumables, and access your stockpile. NPCs you meet in the world will often gather here, opening up new vendors and smiths to upgrade armour, weapons, trinkets and potions. Hearthen Flasks and Hazelight take the place of Estus Flasks for health and focus respectively, and you’ll need to gather items to replenish them in the wild. 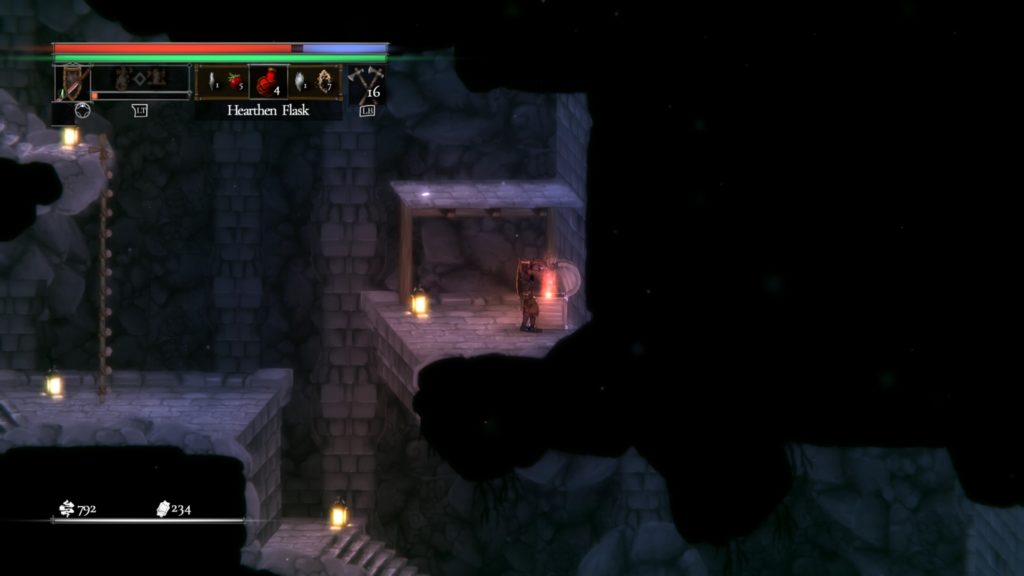 Taking a leaf from Monster Hunter, of all things, Salt and Sacrifice’s gear system allows you to craft armour, weapons and jewellery from materials that drop from the Mages you hunt. It’s a great system that gives you a reason to repeat Mage Hunts against enemies of different elemental affinities. Visiting the Warpsmith every time you encounter a new type of Mage will reveal new sets to craft. Unfortunately, it also borrows the concept of wandering bosses from Monster Hunter, which can occasionally lead to you contending with more than one Mage at a time, which can be insanely frustrating.

From Pardoner’s Vale you can access the Mirrorgate, which allows you to head into previously discovered areas or initiate Mage Hunts. Named Mages and story bosses are compulsory objectives, while Nameless or Fated Hunts are optional quests you can embark on to gain materials and Salt (your XP currency).

The Mages themselves are a diverse bunch. There are 20 variations, all with very different elemental skills, defences, and minions. While it’s hard for a 2D action game to deliver tactics beyond dodge-rolling hit-and-runs, Salt and Sacrifice makes an admirable effort. Bosses and Mages have multiple attacks, varying wind-ups, and several stages to their combat patterns. Each one is ultimately a matter of mastering the timing, but the amount of weapon types and abilities you have allows for some interesting strategies. 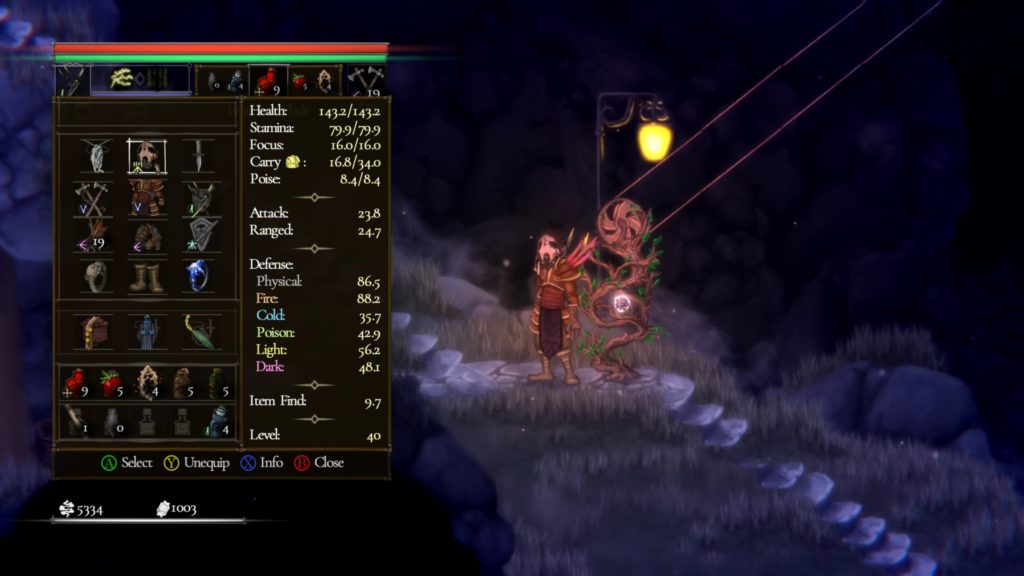 As you move through the five main areas you’ll acquire new traversal abilities such as the grappling hook. Although five sounds paltry, be aware that each area is huge, comprised of several expansive dungeons, secret areas, hidden pathways, and circuitous shortcuts. If anything, Salt and Sacrifice really needs a map. Games like Dark Souls can get away without having a map because your brain remembers landmarks and enemy placements, and From are masters at intuitive level design.

In a 2D world, however, backgrounds blur together as you focus almost exclusively on the foreground. It’s easy to get turned around, especially as Altarstone opens up quickly and unexpectedly. You’re also required to backtrack a lot, as the fast travel system is limited to dropping you at the start of each area so you constantly have to retread old ground.

Each area gives you a new Metroidvania-type power-up, forcing you to head back to older areas to find secrets you missed. I took to making a map as I went, which is about as conducive to immersion as pausing a Marvel movie to consult Wikipedia every time you spot an Easter egg. It’s doubly egregious when you can’t pause the game, and if you’re on a Mage Hunt minions will constantly spawn in your vicinity. 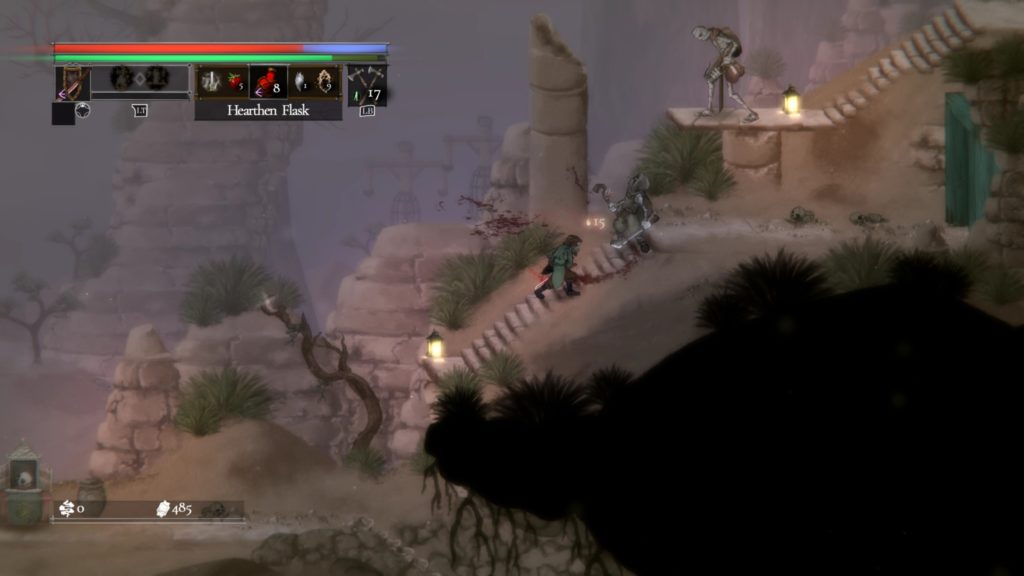 Salt and Sacrifice is a true evolution of what Ska Studios have delivered before. The art assets are all brand new, replacing the samey monochrome of Sanctuary with chunky, colourful characters and detailed environments. The music begins to chafe after a while (there’s only so many times you can listen to the same screaming guitars during a Mage Hunt, for example), but overall the atmosphere is spot on. Though, it would be nice if one day someone develops a Soulslike that doesn’t carry over the negatives along with the positives.

For example, dying in Salt and Sacrifice makes you Spellmarked, which reduces your health by about a quarter until you use a Guiltless Shard, which are hard to come by. This is an archaic system that even From left behind. It does nothing but compound the punishment for death, which wouldn’t be so bad if some deaths weren’t almost completely unavoidable. Now and then you’ll take a hit and the physics will throw a fit, launching you halfway across the area.

Other times you’ll be stun-locked by a couple of enemies whose attacks sync and wipe you out in seconds. There are traps that you simply won’t see the triggers for, and multiple Mages can spawn on you while you’re already mid-Hunt. It’s bad enough you have to fight your way back to your place of death without being in a reduced state for the trip. 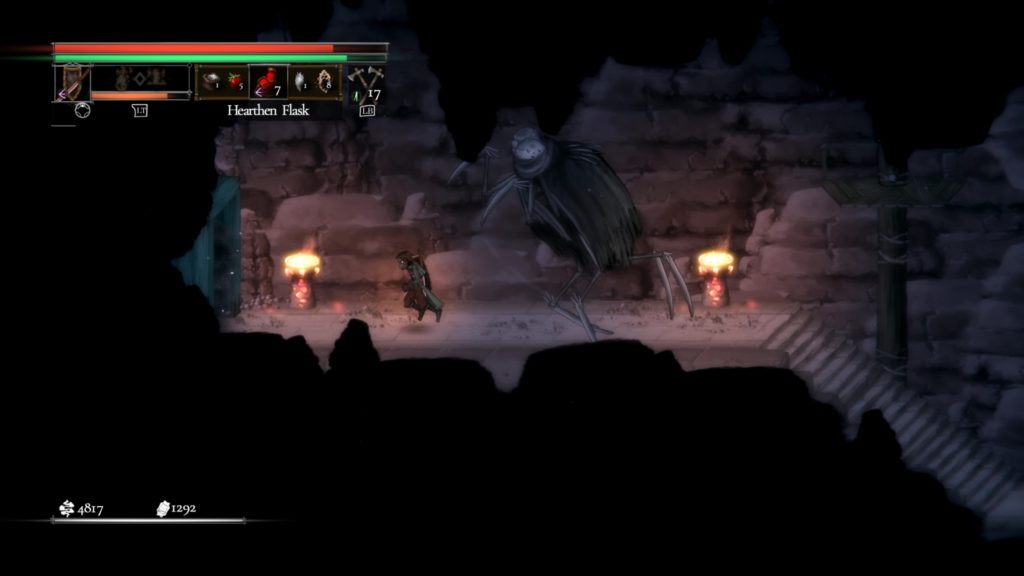 Salt and Sacrifice: A stunning achievement

I also have issues with the multiplayer, which is just as needlessly complex as a FromSoftware game. Developed by Devoured Studios (an outfit comprised of James Silva and Shane Lynch), the multiplayer utilises half a dozen items, currencies and NPCs when it could simply allow you to join on a friend or initiate an invasion from wherever you are. Instead, teaming up with a friend requires one item, while helping someone or calling for help requires others.

Multiple factions vie for your patronage, and each has its own currency and rules. Also, you can only be invaded when you’re cooperating, so forget having a simple run with a friend as you’ll often be invaded by other players looking to ruin your day. It’s frustrating that the multiplayer works this way, as no one really seems to benefit from it and the only reason for it is “because Soulslike”. It’s also tricky to play coop on a 2D plain, when all the effects, enemies, and clutter make it difficult to see what’s going on.

But besides an optional mode that you can simply ignore, Salt and Sacrifice doesn’t put many feet wrong. James Silva, Shane Lynch and the few others involved in bringing this to the masses should be incredibly proud of what they’ve achieved here. It’s a game that could take you 20 hours or 40, maybe more if you do want to indulge the multiplayer or the endless optional Mage Hunts to unlock every last piece of gear.

Salt and Sacrifice may not be the best Metroidvania ever made, but as a 2D distillation of the Soulslike formula, this is pure gaming alchemy.