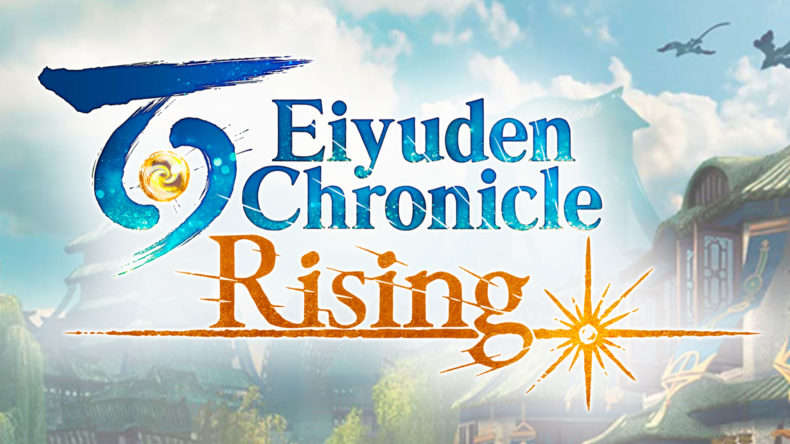 We live in an age of nostalgia and while that sometimes leads to cynically cashing in on a franchise, it can also lead to something magical. The cult classic Suikoden series has been dormant for almost 14 years now, so when two of the names behind this classic took to Kickstarter to raise money for a spiritual successor the masses answered with their wallets. While we wait for this sprawling JRPG, Rabbit & Bear Studios decided to create an action RPG prequel that will set the stage. It’ll be interesting to see how it ties in with the main game, but for now Eiyuden Chronicle: Rising is more than just a side story.

The first of our three heroes, plucky young treasure hunter CJ, has been cast out from her home until she can find a treasure worthy of her clan. Upon hearing the news that the mining town of New Neveah has opened up the local ruins, she journeys across the land to find a village on the brink of ruin. The acting mayor has come up with a plan to save New Neveah, and that involves making anyone who wants to look for loot in the ruins help fix up the town first. So stamp card in hand, CJ sets off to do some odd jobs.

You’re given all sorts of tasks by the locals, ranging from rescuing missing pets to harvesting whiskers from snow yetis. More often than not though they’ll require you to leave town and go somewhere more dangerous. This means dusting off CJ’s climbing picks (her unconventional weapon of choice) and fighting a load of monsters. Combat is beyond simple early on, with a three hit combo and a dash to avoid damage all you have access to. That won’t be enough to survive outside for long, but fortunately some unlikely allies are happy to provide some support in that department. 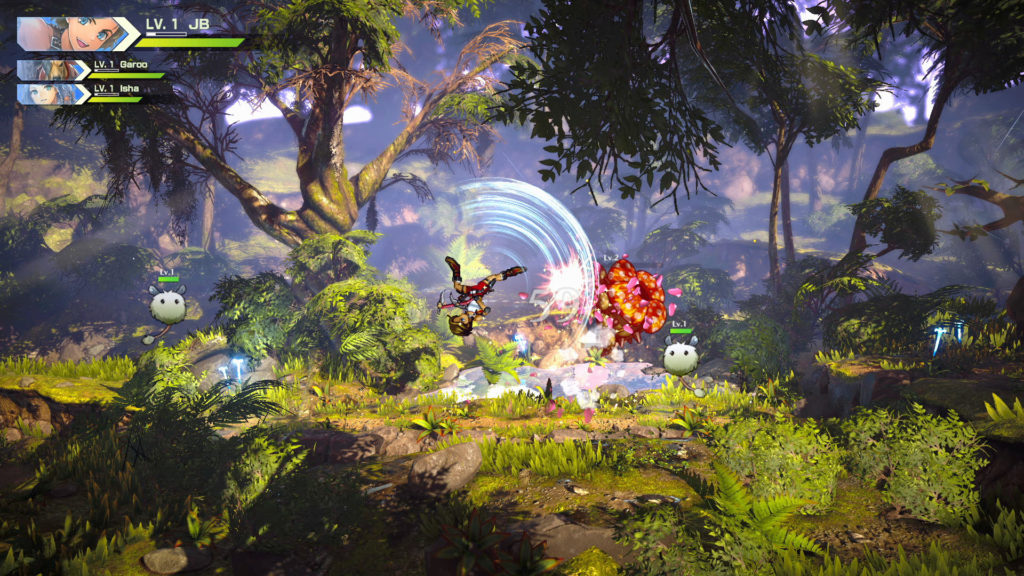 The first of these comes in the form of a kangaroo with an eyepatch and a massive sword, and the other is the mayor who happens to also be a magical girl. Each of the three characters is assigned a face button on the controller, and to tag them in and attack with them you simply press that button. You can play as whichever character you want as you wander around the sidescrolling stages, with each of them sporting different movement abilities and attacks.

CJ is a speedy scrapper, and is definitely the character you’ll control most when exploring the world. Garoo the Kangaroo is much burlier, but can break rocks with his blade, block attacks and do a massive vertical leap with a bit of charging. Isha the magical mayor is (you guessed it) magical, with ranged elemental attacks and the ability to teleport out of the way of damage.

This trio perfectly compliment each other when it comes to beating up bandits and bosses, especially when using link attacks. By switching character after landing a blow, time will slow down and they’ll land an extra powerful attack or two. As you progress through the game the amount of these you can do in a row increases, and you’ll be able to string together huge chains of tag team offense. These attacks are as satisfying as they are flashy, and I never got tired of using them. 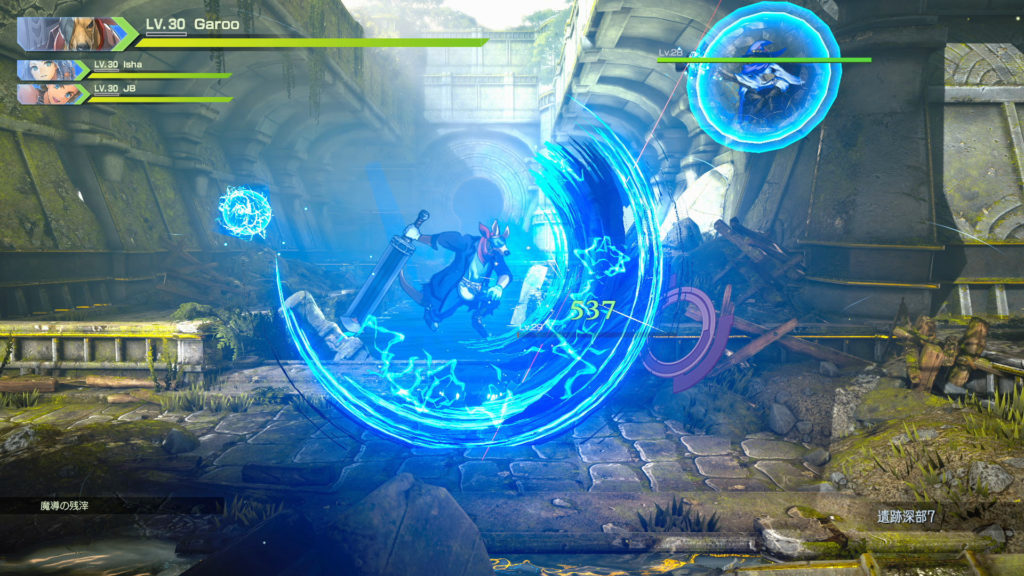 You might think that all this talk of swords and magic means you’ll spend most of your time in Eiyuden Chronicles: Rising beating up baddies, but that often takes a backseat to picking up rocks and sticks. To help build the village back to its former glory and fill up your stamp card, you’ll need to help open up a whole host of shops in New Neveah by completing (practically compulsory) side quests. Once you help a villager by giving them enough lumber or completing market research (talking to a few villagers) a catchy tune will play and a burly builder will complete their shop, and you’ll have access to a selection of new upgrades.

There’s so much to upgrade in Eiyuden Chronicles: Rising, from simple equipment buffs, pack upgrades, and even new armour and weapons that unlock longer combos and abilities. Every single one of these will require plenty of cash and monster parts to unlock, so get used to running out to the forest to gather slime and scrap until your bag is overflowing. For the first ten hours or so I really enjoyed the relaxing gameplay loop of gathering items and upgrading my characters, but as you progress further you’ll soon realise quite how excessive the amount of grinding that’s expected of you.

This is especially true when you notice how small the areas outside of town really are. Each new zone (of which there are about 5) can be fully explored in all of ten minutes when the game allows it, but Eiyuden Chronicles: Rising manages to slow your progress so consistently to stretch this game out way past the twenty hour mark.

The main story is split into quests, which are generally as simple as “go to this location” or “help this person”. Each time one of these is completed, a handful of side quests will pop up on the message board in town. Unless you want to miss out on new gear, you’ll be travelling back and forth constantly (thank god for fast travel). 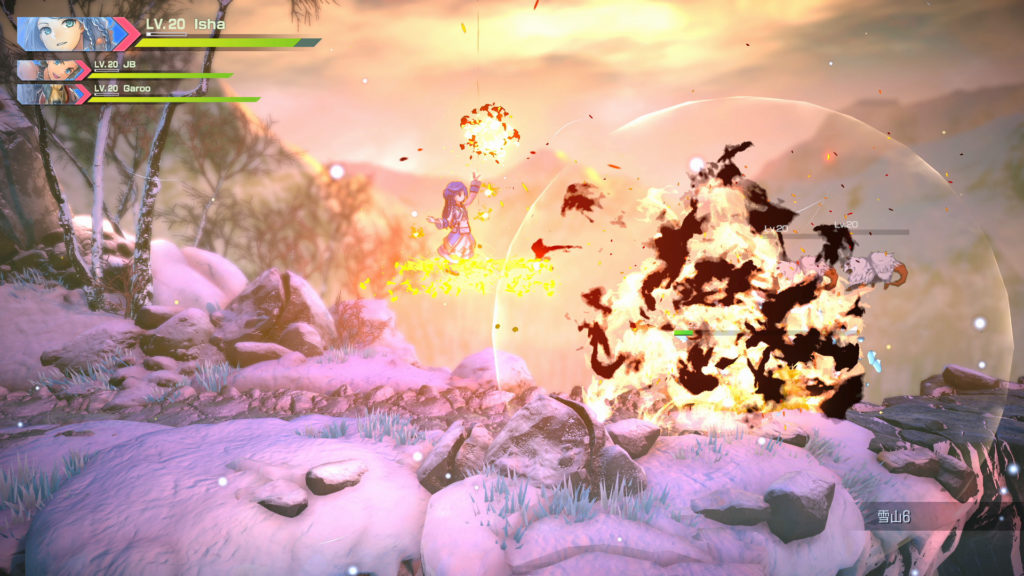 It’s a shame that so much of Eiyuden Chronicle: Rising is artificially extended with slow paced side quests, because it does so much right. Interesting systems like elemental runes that you can equip to deal more damage to certain enemies, upgradable tools that unearth even more materials and a restaurant that serves up stat boosting grub should tick all the boxes for me. But it takes so long to get to these systems that I was losing interest by the time I did. Even meeting your party members takes multiple hours, and the very start of the game is almost devoid of entertainment because of it.

If you can deal with the pacing issues though, there really is a lot to love in Eiyuden Chronicle: Rising. It looks absolutely gorgeous, with some of the best 2D art combined with 3D environments to create a visual masterpiece. The soundtrack is also a dream, with a whole host of laid back tunes that’ll get stuck in your head.

Eiyuden Chronicle: Rising is a beautiful game with fantastic combat, but the pacing of the game lets it down. It’s a joy to link attack your way through tough foes, but returning to the same forest and quarry four times in a row to gather ore gets old fast. With a few hours trimmed Eiyuden Chronicle: Rising would be something special, but as it stands you’ll need to really enjoy the gameplay loop to be able to put up with the repetition.

Eiyuden Chronicle: Rising has flashy combat and gorgeous visuals, but the repetitive gameplay loop really holds it back.

Eiyuden Chronicle: Rising is an action packed side-scrolling RPG with a ton of potential | Hands-on preview