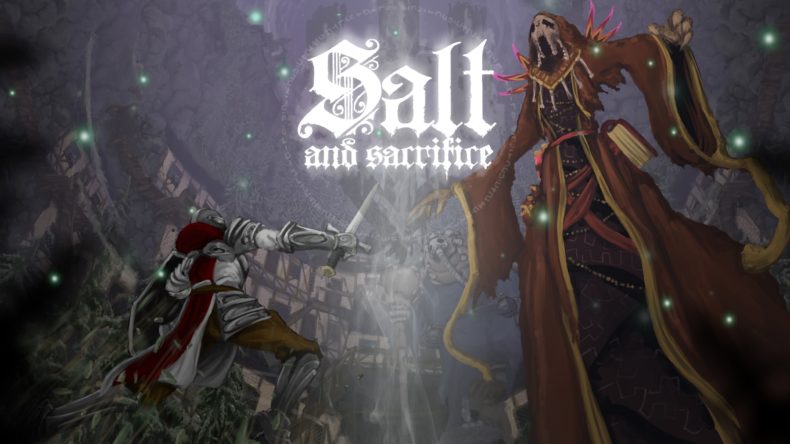 Five years on, I still find it hard to believe that Salt and Sanctuary was developed by one man. James Silva of Ska Studios cemented himself as a genius in my eyes, as even now his 2D imagining of a Soulslike universe remains one of my favourite games of the last decade. Like many, I’d mostly resigned myself to the fact that a sequel just wasn’t on the cards. And so you can imagine my excitement when Salt and Sacrifice was announced.

Similarly to Dark Souls, much of Salt and Sanctuary felt like walking down a dark corridor full of shin-high coffee tables. It was a game just as able to infuriate as thrill, built to be challenging, but, perhaps, a little too obscure for its own good.

Based on my time spent with the Salt and Sacrifice closed beta on PS5, it’s following a familiar template. It’s also just as obscure – even moreso at present, as the beta seemed to have missing item descriptions and placeholder text. Will it all become much easier to understand at launch? Probably not. Do we care? Same answer. Most people don’t play Soulslikes for the easy-to-follow story. 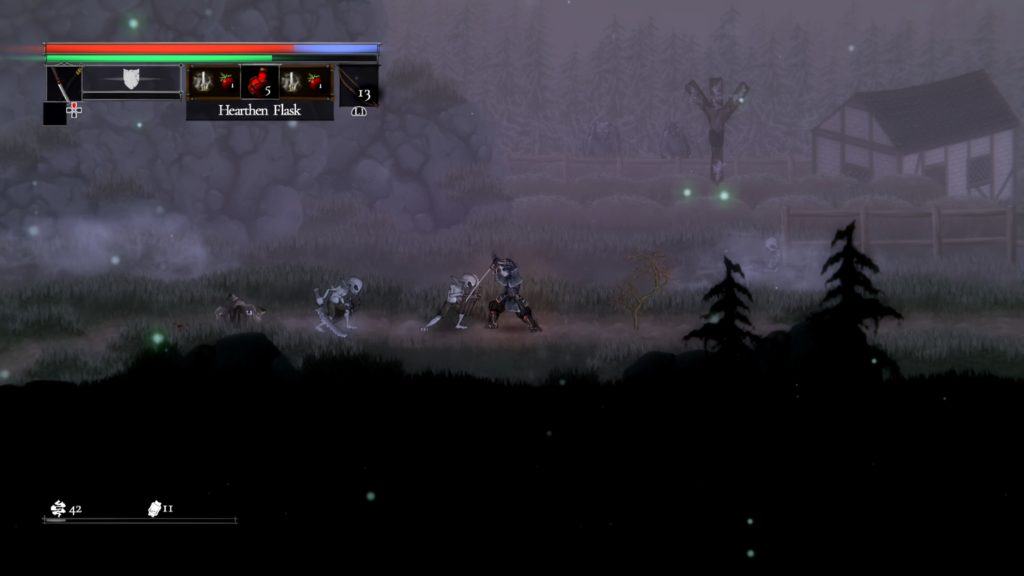 And this is a Soulslike, through and through. You play a Marked Inquisitor, a convicted criminal sent to some hellish mire to hunt Mages. You’ll be brought back to life upon death, which will leave you weakened by the weight of your Guilt. In real terms, this means you’ll have reduced HP until you restore yourself with a rare item. It’s similar to being Unkindled in Dark Souls.

Obviously, this makes for quite a steep challenge. Being spread exclusively across a 2D plane, Salt and Sacrifice’s combat is less nuanced and complex than that of its 3D cousins. You can perform light and heavy attacks, and dodge forwards or backwards. There’s also a jump (although this lacks invincibility frames), and various throwing weapons and, of course, spells should you build that way.

As is de rigueur, the class you choose at the beginning only determines your starting gear and initial stats. You can build away or into this class as you progress along the wildly branching skill trees. You’ll not only improve stats and unlock skills, but you’ll be able to use and wear more advanced versions of your weapons and armour. You can only level up at specific shrines – one of which is found in the hub of the beta. Salt is the currency you need, and getting back to safety with enough to spend is half the battle. 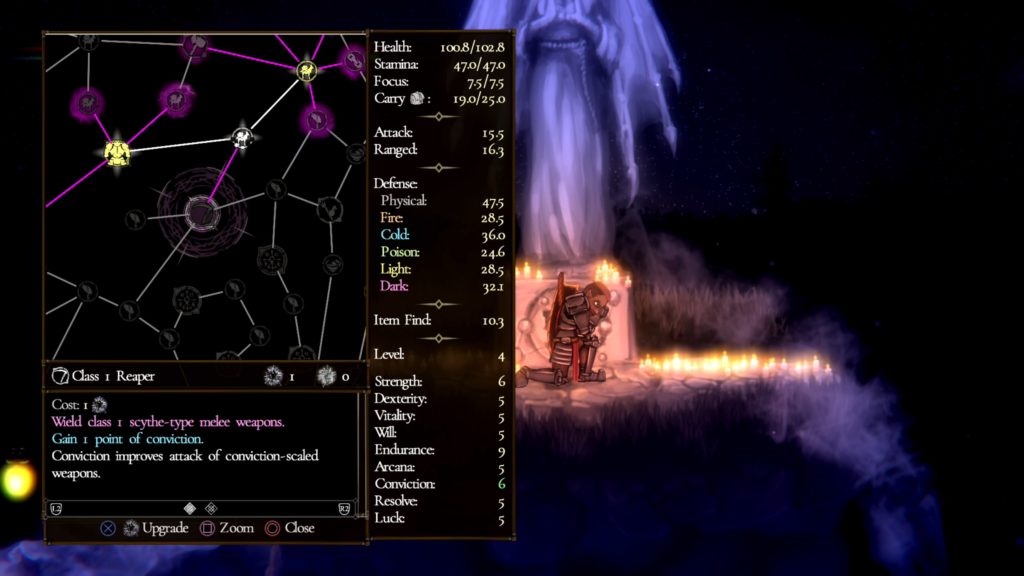 Whether the hub shown in the Beta is how it will look in the final game remains to be seen but it’s not likely to change much. Right now, there’s a bunch of NPCs spouting place names and concepts out-of-context. Little of it makes much sense at the moment, but it doesn’t really need to. Put simply, your job is to hunt down errant Mages (here portrayed as screen-filling monstrosities) and put an end to their evil.

Journeying through ruined towns and down into darkened mines, Salt and Sacrifice’s intuitive level design makes it fairly easy to find your way around. A handful of doors were sealed by the “Power of the Demo”, which made me chuckle. There were a handful of bosses to fight, including the now-standard insta-death intro boss who flattened me like a bunny in a steel roller.

Having only seen a few, it’s difficult to speculate on what they’ll be like in the final game. In Salt and Sanctuary some of the bosses struggled to present a genuine challenge because you kind of had to deal with them all in the same way. Dodging through attacks and countering became my prime strategy, and so besting a boss relied more on timing than spacial awareness or even my build. 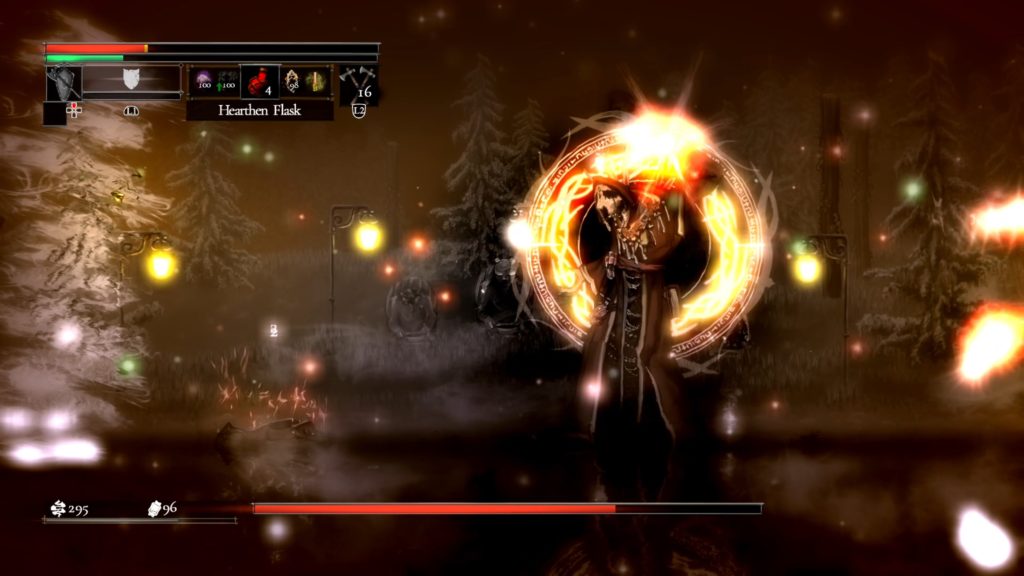 This being 2022, there’s a grappling hook. But rather than just being a gimmick, it becomes an essential tool for reaching higher areas and finding secrets. Movement feels deliberately weighty, and this includes jumping and swinging. Some of the areas seemed very vertical, allowing access to entire new sections of the game.

You can teleport back to the hub from any Obelisk, where you’ll also respawn, but fast travel out seems restricted to specific start points, which may become infuriating. It means essentially traversing an area each time you travel there, and facing off against all the respawned enemies. Obviously, there are shortcuts and secret routes that alleviate this, but in a post-Bloodborne, post-Elden Ring world, we’re used to Soulslikes being a little less deliberately stressful.

Multiplayer follows a very Soulsian format. You’ll need to be Guiltless to summon help or be summoned yourself. Worryingly, players you summon in can choose to betray you, which is awful for pretty obvious reasons. Also, this is not a 3D action game, so having two player characters can make it difficult to track your own movements. Factor in that some bosses like the Mages have bright, blinding attacks and you’re in for a world of hurt. 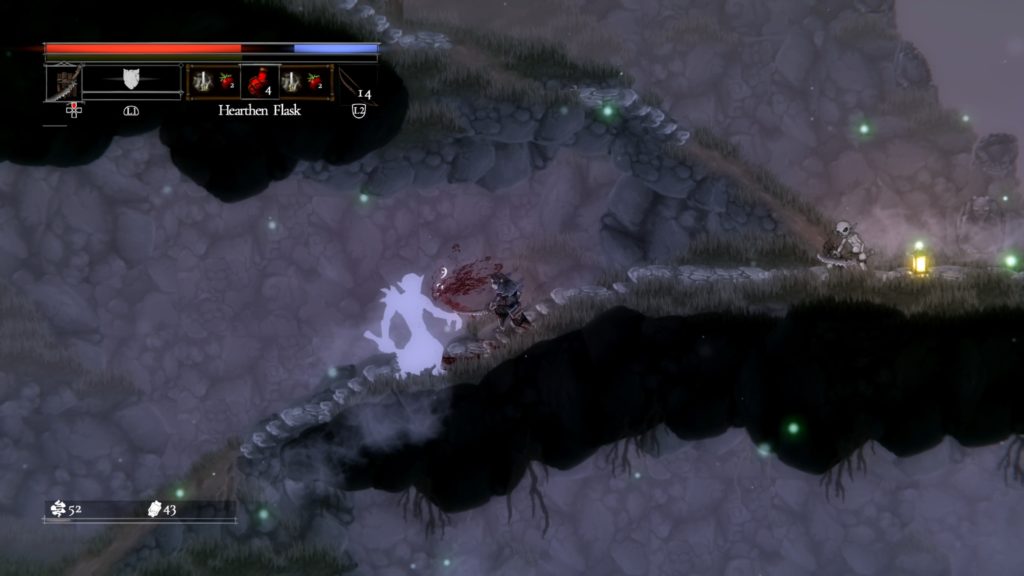 Perhaps unsurprisingly, Salt and Sacrifice is sodden with atmosphere. The muddy, water-colour-like visuals are gorgeous; the land is wreathed in fog and darkness, and tiny splashes of light are rare and welcoming. Characters feel bolder and brighter – in fact there’s more colour in the world than there was in Sanctuary. And the world is better looking for it.

The Beta did more than just whet my appetite. It’s a brutal, unforgiving world, but there’s so much to explore and find that I can’t wait to dive in and experience everything it has to offer.

Salt and Sacrifice is due to be released on May 10 on PC, PlayStation 4 and PlayStation 5.

Senior Content Editor Mick has been playing games for over 30 years and writing about them for around 12. After drifting from site to site for a while, settling briefly at the now-defunct Made2Game and freelancing for the gone-but-not-forgotten NintendoGamer Magazine, he came at last to rest at Godisageek. Mick has been a reviewer, staff writer and content editor here for some time, while also moonlighting a little for Red Bull Games. He has 4 kids, has written 2 novels, and sometimes even manages to pay a bill or two. You'll usually find him defending the galaxy in Destiny 2, battling evil in Diablo 3, or lurking in the background on Twitter. Find him there @Jedi_Beats_Tank, or on XBL (JediWaster247), PSN (Jedi_Waster) or Nintendo (JediWaster).
MORE LIKE THIS
Devoured StudiosSalt and Sacrificesalt and sanctuarySka Studios