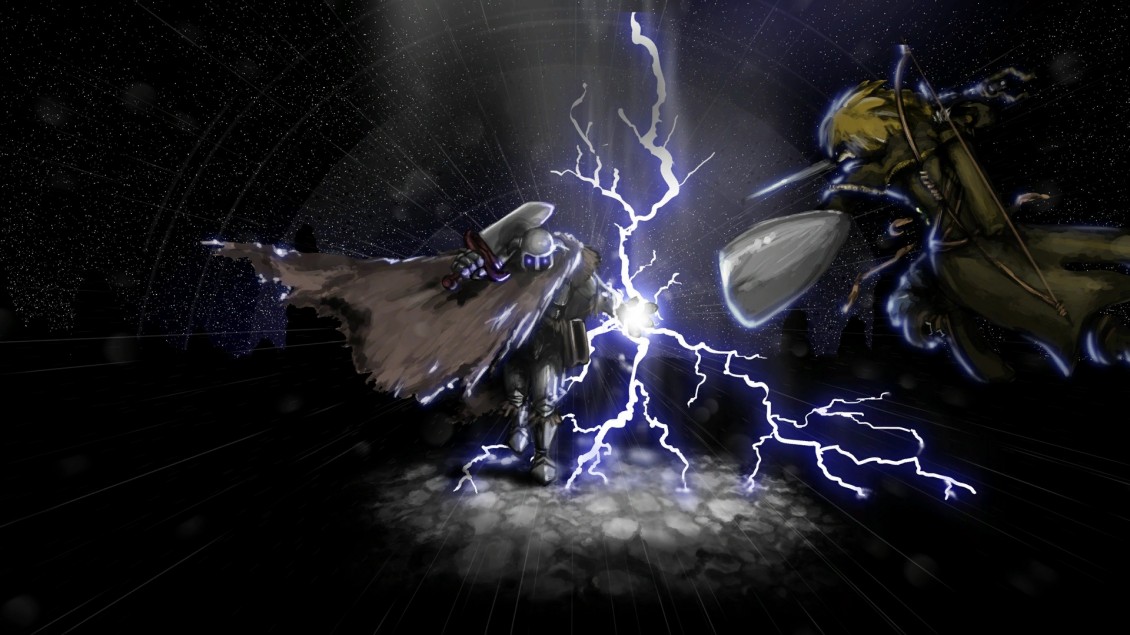 It’s not often that a game comes along and defines its very own genre. From Software achieved it with Demon’s Souls, a bastard hard action-RPG that has given rise to numerous spiritual successors and a handful of worthy pretenders. Salt and Sanctuary fits into the latter category, breaking up the primary tenets of the “Souls” sub-genre and re-organising them into a side-scrolling action platformer with an emphasis on brutal combat and multi-branching skill progression.

The influence is worn proudly, but Ska Studios has resisted the temptation to catch a ride on anyone else’s coattails. Instead, they’ve managed to pay homage while spraying their own distinctive style all over it. Those who remember The Dishwasher and its sequel (or even Charlie Murder) will be familiar with Ska’s trademark washed-out visuals and hard-hitting, fast-paced combat, all of which transition wonderfully well into the realms of the fantasy RPG.

You begin, as is often the case, with character creation, which is more diverse than you’d expect, allowing you to select from several origin countries and eight classes, while at the same time playing with skin tone and hairstyle variants and your starting trinket. You’re then thrown directly into the action when your ship is attacked by pirates and the princess you are sworn to protect is kidnapped and taken to a mysterious island. After you’re soundly defeated by a nigh-unbeatable boss (who I’m sure some crazed YouTuber will kill bare-handed at some point), you wash up on the shore of the island and are asked to pick your religion. This determines which kind of curative you’ll be given, which prayers you can learn, various repeatable quests and, most prominently, what your Sanctuaries will look like. Sanctuaries are this adventure’s version of bonfires or lanterns. They are where you go to spend salt to level up, where you buy and upgrade gear, learn spells and, basically, rest up. They are fairly wide-spread, but also spread fairly wide, and every time you find one it comes as a huge relief. Enemies drop gold and salt, and when you’re defeated you drop the latter and must return to the scene to reclaim it. The act of your resurrection costs you a percentage of your gold that seems determined by the manner of your death and distance from the Sanctuary. You can invite merchants, blacksmiths, clerics, and guides to your Sanctuary by offering an idol to your gods, providing your chosen religion aligns with the haven’s established creed. Even if it doesn’t, you can still level up and access the expansive skill tree.

You’ll want to focus on one or two branches to maximise your effectiveness, although you won’t be penalised for diversifying. Combat is an eclectic yet familiar mix of light, heavy, ranged and magical attacks, blocking, and evading, and you can use various gear loadouts such as swords, shields, wands and staves, bows, axes and even guns. Armour comes in heavy or light forms, the use of which is dictated by a carry weight stat lifted directly from Dark Souls. If you’re too heavy you won’t be able to evade or attack much before your stamina is depleted, for example. Restricting the combat to a 2D plane removes a great deal of tactical manoeuvrability, and it really becomes a question of when to block and when to dodge away or through your opponent. Even low-level grunt enemies can be a challenge if you try to rush through them, and it’s easy to get stuck in a corner or up against a wall if you don’t keep your wits about you.

And you’ll need your wits when you face the bosses. Towering brutes with intimidating names like The Queen of Smiles, Kraekan Wyrm, and the False Jester. They usually focus on either magic or melee damage, and have a variety of moves which become more difficult to evade and counter as you deplete their health. Most bosses usually have three stages, with the final stage – at around 30% health – taking the form of a frantic, almost desperate assault in which they hurl everything they can at you. Each rewards you with a large supply of salt and a special item to help in the upgrade of your gear. Some are so easy you wonder if that was it, while others are absolutely behemoths with multiple attacks, adds, ranged and melee move-sets and screen-length hit-boxes. As with its larger cousins, it tends to be fair, and skill, patience and perseverance will usually see you victorious eventually. It also has that feeling that it’s unfair, until you actually succeed, and the elation is just overwhelming. Exploration is as important as combat, but it refuses to signpost anything. The world design is intuitive, so much so that you won’t need a map, and the fast travel system (unlocked by inviting an NPC guide to take shelter at your Sanctuary) can zip you between your safe havens. There are hidden rooms, secret pathways and shortcuts galore, and it’s always worth going back when you find a new key or unlock a new Brand (sigils awarded to you at various points in the game that allow you to interact with the black obelisks scattered around). The first one you get, as an example, switches your centre of gravity, allowing you to walk on the ceiling and reach previously inaccessible areas. Later Brands allow you to traverse differently, thus they encourage you to go back to the start in case you missed anything your new found powers can reveal to you.

It wouldn’t be true homage without a subtle multiplayer element, and Salt and Sanctuary allows you to leave messages for other players with a device called a “Journey Bottle”. You can warn people of traps, treasure or impending bosses, or play tricks if you’re so inclined. You will occasionally see other players run into your Sanctuary but disappear when you follow them out. You can’t play online with people, but using an item called a Stone Sellsword you can activate a couch co-op mode and have someone on a second pad control your hireling. It’s decent fun, of course, but the screen gets a little too busy and boss fights can become confusing when you can only really attack from the left or the right and the boss doesn’t know which way to turn. Cruelly, bosses will display the severed heads or mutilated corpses of players they’ve kill on pikes and spears in or around their lairs, just so you know they mean business.

Packing plenty of areas into a healthy 20-odd hours of adventure and combat, Salt and Sanctuary is a compelling, atmospheric odyssey that uses its gloriously grim visuals to heighten your anticipation at every turn, dropping you into pitch darkness as you explore underground or throwing sudden bosses at you when you’re not expecting it. The lack of a clear and focused narrative is a minor issue; indeed one reason the Souls games are so interesting is that they have mountains of lore tucked away in regards to the bosses and items, ready to be uncovered if you choose to look for it.

This surpasses the quality of the Ska’s previous work and delivers a role-playing opus that seems bite-sized at a glance, but which soon reveals itself to be anything but. Like the blood-soaked, steel-clad love-child of Dark Souls and Super Ghouls ‘n’ Ghosts, Salt and Sanctuary is brutally difficult, beautifully drawn, and meticulously crafted, and what it lacks in pure story it makes up for with atmosphere, depth and charm.

Watch our live stream archive of Salt and Sanctuary.

Short on explanations.
Narrative is bare-bones.

A fantastic, original take on the Souls-formula that maintains the addictive risk/reward loop we’ve come to expect from the genre.

Salt and Sanctuary arriving on Xbox One on February 6