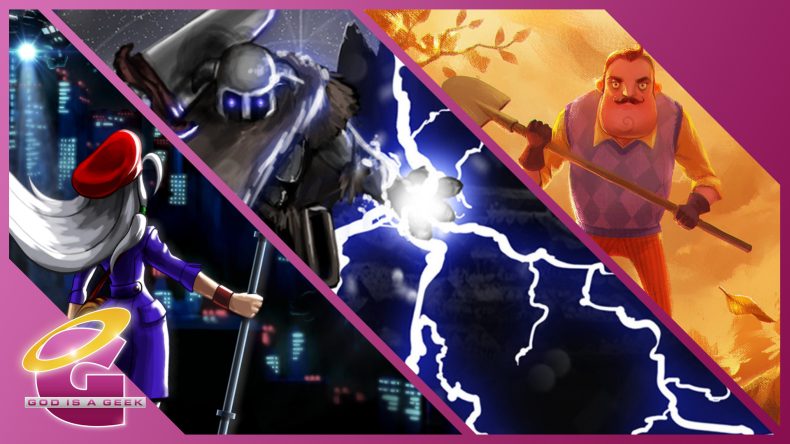 This week’s Re:Port Review features Gary Bailey discussing how the fantastic Salt and Sanctuary is on the Switch while I look at tinyBuild’s Hello Neighbor and Cosmic Star Heroine from Limited Run Games and Zeboyd Games. Salt and Sanctuary is a game that deserves to be played. It mixes together elements of Castlevania and Dark Souls, creating a game that is incredibly well designed and is easily as compelling as anything from either of the series that it draws inspiration from. Ska Studios’ game is a side-scrolling action RPG with platform elements, taking place on a mysterious island filled with undead beasties and Lovecraftian nightmares. After washing up on the island, you’ll be forced to survive by battling said beasties and using their salt to make your character stronger and your weapons more deadly.

So far, so Souls, right? It’s true that the gameplay is very similar to FromSoftware’s games, even with a few nods here and there (there’s basically a Bloodborne outfit in there), but the 2D, sidescrolling perspective and the more platformy nature of the gameplay, makes for a more fast-paced experience. You can still dodge-roll and parry, but there’s more to it than being an homage to other titles. The world is surprisingly huge and interconnected, with one particular shortcut heading back from the final area of the game, to one of the earliest places you visit. It’s a long run too, making you realise just how big the island is.

I spent most of my time playing Salt & Sanctuary in handheld, where it really shines. It looks sharp and runs at a mostly solid 60 frames-per-second, with only a few dips during more particle-intensive moments, and especially when you beat a boss and the “vanquished” message takes up almost the entire screen. It’s rarely ever an issue though, as it doesn’t seem to drop below 30fps and it’s only ever for a few seconds at a time. It’s still present when docked too, where it looks a bit blurry but nothing too detrimental. That signature Ska Studios art direction helps to keep things looking darkly beautiful, no matter what.

The controls fit the Joy-Cons very well, with the face buttons used for attacking and jumping; the shoulder buttons used for rolling and blocking, as well as item usage and weapon swapping. You can have two sets equipped at a time; I usually go for a sword and board set, with a larger, two-handed weapon as the second set. Everything here is fine for the most part, except for rare moments when a button wouldn’t register, with one example leading to a long fall and a decidedly squishy end. Luckily this is extremely rare, but no less frustrating when it happens.

I had already spent hours and hours and hours playing Salt and Sanctuary on PS4, filling the character slots completely as I tried out different character builds and weapon sets (including transmuted weapons, which is where you use special items such as the ear of a boss, to change a weapon into a more powerful version). I can see the Switch version being the same, especially as I can sit and play anywhere in handheld, loving the exploration and subtle, environmental storytelling. That said, it’s an incredibly dark game, even with the screen’s brightness turned all the way up; maybe playing it outside in the Summer is a bad idea.

Be warned however; Salt and Sanctuary is as difficult as its inspiration would suggest. You will die, often and in spectacularly embarrassing ways, but you’ll learn and adapt. You’ll level up and then you’ll overcome its challenges and you will probably love doing so. Because Salt & Sanctuary is a game that deserves to be played.

Originally released in 2017 on PlayStation 4, PlayStation Vita, and PC platforms and scored 9/10 Originally a Kickstarter project, Cosmic Star Heroine from Zeboyd Games debuted on PS4 and Windows before finally make its way to the PS Vita. I reviewed the Vita port and loved it but was hoping it would eventually see a Switch version because it is definitely “perfect for Switch”. If you’ve been wanting a 16-bit era RPG that feels modern in every aspect, Cosmic Star Heroine is for you. The Switch port offers the best of the PS4 and Vita versions with various improvements.

While Cosmic Star Heroine is already brilliant on other platforms, it shines on the Switch for a variety of reasons. On the PlayStation side of things, buying it once nets you both the PS4 and Vita versions but there’s no cross save support so you essentially get two different games. The Switch plays and runs much better than the Vita version and basically nearly matches the PS4 version in both handheld and docked modes. I lamented the long load times on the Vita and this version has no trouble getting you into the action super quickly. I only had a few minor framerate dips during certain non gameplay scenes on the Switch. The only real issue is that there’s a weird audio glitch in the opening which I’ve been told is being fixed around release. The actual gameplay is still awesome and well worth your time. While it could’ve used some nice HD Rumble support during combat like Octopath Traveler, it does support the Switch native video capture to share those awesome cutscenes and combat moments.

Overall, Cosmic Star Heroine on the Switch is the definitive version of the game. While I would’ve hoped for things like touch support to progress dialogue text, I can safely recommend this to anyone looking for a great RPG to play on the Switch. The soundtrack is still stupendous and Cosmic Star Heroine is in my top RPGs to play on the Nintendo Switch. I look forward to buying a physical copy of it later this year from Limited Run Games who are publishing and ported this to the Switch.

Originally released on Xbox One and PC platforms before releasing simultaneously on Nintendo Switch, PS4, and iOS While most people probably discovered Hello Neighbor through YouTube playthroughs, I actually found out about it through retail listings because it is the rare indie game to have an Xbox One physical release and skip other consoles (at the time). The art style and premise have always been interesting but the end result is a mixed bag of ideas and poor visuals on the Switch.

Hello Neighbor is a survival stealth horror esque experience spread across 3 acts and a finale. It reminds me of Alien Isolation to some extent with the Neighbor here adapting to your moves with AI behaviour that learns. You aim to get into the basement of said neighbour’s house to uncover the secrets lurking within after an unnerving opening. Initially it is a lot of fun if you enjoy games that give you sandboxes to screw around and try things out but the experience soon becomes pretty tedious and you see how many of the smart ideas don’t gel together and feel poorly thought out overall.

The Switch port’s only redeeming factor is the performance. It isn’t as bad as the iOS version and is quite smooth overall. There are a few instances of hitching here and there but things aren’t terrible. Visually, it looks really poor. The art style is nice and that still shines but it definitely feels unpolished. Since this has an iOS port, I expected some use of the Touch Screen but despite the higher price (most expensive version across all platforms), the Switch version just feels like a downport overall with nothing of value. If you want to play this at home, you’re better off getting it on PS4 and if you want to play it on the go, check out the mobile version where you can play the first full act for free.

Overall the Switch port has almost everything going wrong with poor visuals, a higher price point than the other platforms, and poor use of Switch specific features. In its current state, you’re better off either buying it on another platform if you must have it, or skip it altogether. I hope the developers can either improve the visuals through patches or work on