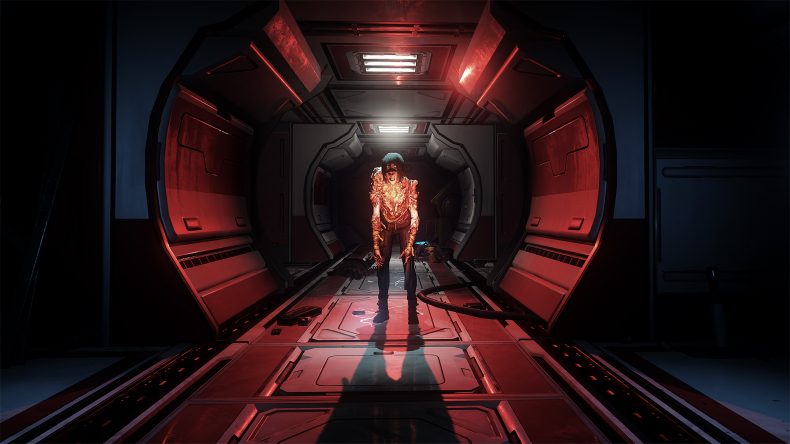 In space no-one can hear you scream, right?

Well my wife certainly could whilst I was playing The Persistence! In one of the best VR horror games on the PlayStation 4, you’re thrust into an ever-changing spaceship filled with deformed humans hell bent on eating you for breakfast – and lunch, tea, and snacktime for that matter, too. It’s a procedurally generated nightmare that perfectly encapsulates the fear often felt in games like Dead Space and Alien: Isolation, except this time you’re there, living with the threat of bloody murder every second, and I wouldn’t change it for the world.

You play as Zimri Eder, a clone of the ship’s security officer. After a failed mission on the edge of deep space, you must find a way to bring The Persistence (the name of the ship) home by restarting the ship’s stardrive. The black hole that is slowly pulling you in has affected the entire ship, forcing plenty of duplicate cones to be created with varying mutations and deformities, and it is these enemies you’ll spend a lot of the time trying to kill, or harvest. The ship is made up of four decks, and each one has an objective for you to complete. The problem is, the black hole is messing with its layout, and everytime you die rooms disappear and move – enemy types switch out and return, and no journey through The Persistence is the same. This makes the game such a unique experience, blending survival horror with the rougelike genre, testing your style of play and pushing you to the limit, especially as you move forward in the game and the enemies become a lot tougher to beat.

There are plenty of motion controls for you to adjust and find the right balance that suits you, and controlling your movement with the PlayStation controller is a godsend. You can also use the teleport function that other PSVR games employ, but for the most part I found it easier to use the controller. There aren’t that many complications when it comes to your options; you start off with a Harvester device that sucks stem cells from the necks of ruined clones as well as a temporary shield that last only for a few seconds at a time, but when used smartly it can knock enemies off guard allowing you to attack easily, or collect their Stem Cells. These Stem Cells can be used to augment your body to improve stealth, melee strength, and your health, as well as harnessing dark matter to give you added abilities like Super Sense – a perk that allows you to scan rooms for incoming threats. As the game progresses you’re free to buy weapons from the armoury using the FAB Chips you can collect, as well as new gadgets that can make tough situations easier to deal with. Rifles, pistols, gravity bombs, grappling hooks, and invisibility cloaks are just some of the neat additions you can buy, and upgrading them as you play will make tons of difference. All of these additions will be lost if you die, but any FAB Chips you have at the point of dying will still be available to you, as will the Stem Cells.

Death can be avoided if you play smart, such as sneaking up behind the freaks of nature, but there are certain rooms that take away your ability to use your dark matter. These moments add to the tense atmosphere because not only is Super Sense disabled, so is your shield. Listening to the unsettling groans and clinking of pipes is bad enough when not in one of these rooms, but when you’re at your most vulnerable, you’ll struggle to keep your underwear clean. Firesprite has managed to incorporate these rougelike mechanics very well with survival horror. The first few hours provide some worrying moments, and even when you’re approaching the end things can get scary. Thankfully by that point you’re more aware of how the game expects you to play, and dealing with enemies becomes second nature. Due to the increasing difficulty you’ll die a fair amount, and even though you can sometimes restart the game from a fair way away from where you were when you died, the constant shake up of the ship’s layout makes it fun to go back to where you need to be.

The VR elements of the headset work really well. Picking up items can be done simply by looking at them for a few seconds, and opening doors or crates is done in the same way. It makes the game more immersive and helps you to feel like you’re more connected to what is going on around you. You’ll also be able to open vents that lead to shortcuts, and exploring them can often lead you to a nice stockpile of health, FAB Chips and Stem Cells. You’ll also find schematics for items around the ship which bolster your arsenal even more. It may not be a looker, but the visuals aren’t the be all and end all. Corridors are grey and dull, and many of the more populated rooms look similar, but thanks to the fantastic sound design the creation of an unnerving atmosphere is well executed. Serena – the ship’s voice to you – often pipes up helping you with certain sections, and her input becomes rather helpful at times.

The Persistence is one of the finest VR horror games on the PlayStation 4, and Firesprite has managed to do something different within the genre. The game can be tough at times, and the visuals aren’t the best, but due to the variety of level layouts everytime you die, and the variety of customisation make it a fun horror to play, if you can stomach the gore.

Visuals are a bit dull
Tough at times

This is one of the better VR titles available on the PlayStation 4, and the variety at which you get to customise your character paired with the survival horror make it a fun game to play.