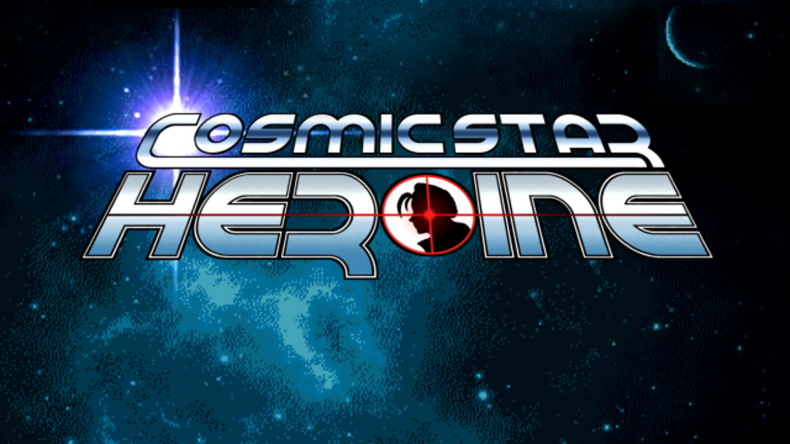 When it comes to Kickstarter projects and Indie games, many end up cancelling ports to platforms that aren’t doing too well. The Vita has been on the receiving end of quite a few of these cancellations and the game I wanted the most was Cosmic Star Heroine. Having played it on PS4 already, it is well worth your time and I even included it in my hidden gems of 2017 feature. Now, Cosmic Star Heroine has finally released on Vita and Zeboyd Games have done a great job with the port.

Cosmic Star Heroine is a turn based RPG that has visible encounters like in Chrono Trigger with an influence from the golden age of JRPGs. The story is great and it has you following Alyssa who wants to save the day with a group of very interesting characters. It’s paced well and there’s no real padding here in this adventure that is shorter than your usual JRPG from that era. I’m a big fan of modern takes on the classic JRPG formula that actually manage being as good as the memory of older games is. You have certain games that try to be like old school JRPGs but failing to actually be interesting enough to play all the way through like Lost Sphear or some that nail a few aspects but fall flat on others like I am Setsuna. Cosmic Star Heroine is a modern JRPG that has the best of old school and new school. Combat is sublime, and there’s an interesting blend of various mechanics here. The characters you encounter not only play differently but are also interesting enough. If you’ve played Chrono Trigger, this plays out like that for combat. Enemies are visible in the field and running into one will initiate combat. I haven’t played a turn based game with combat I enjoyed this much since Persona 5. The way you stack and then unleash massive skills never gets old. There is no MP here and you only have a fixed number of times you can use certain skills before having to defend and recharge them. You gain Style as you fight and have skills that unleash massive damage through consuming all your Style. I cannot stress how great the combat is and how modern it feels despite being a tried and tested turn based combat experience. Exploring is also rapid and it never feels held back by 90s game design that some JRPGs suffered.

Visually, this is a slick looking game. I think this is my favourite retro aesthetic since Shovel Knight by far. The animated cutscenes from the SEGA CD era and the lovely character art make me wish this game had a proper art book I could buy. The polish seen in the art and animation extends to the user interface as well. It looks gorgeous on both a big screen TV and the Vita screen. I’ve been replaying it on PS4 and on Vita to see how it holds up across displays and there are no complaints when it comes to the visuals from me. The only area this slightly suffers is in load times. I had no trouble with actual in game performance but the load times being long are to be expected at this point given the Unity engine on the hardware. While I’ve praised the visuals and gameplay, the standout element is easily the music. When people talk about the golden age of indie soundtracks with Braid, Super Meat Boy and the like, the modern golden age for indies includes Cosmic Star Heroine and VA-11 HALL-A alongside Shovel Knight. I think Cosmic Star Heroine has the most catchy battle theme since Persona 4 Golden’s Time to Make History. I never tire from listening to it and the soundtrack is top notch all the way until the end. This is easily HyperDuck SoundWorks’ best soundtrack ever and one of my favourite modern gaming soundtracks.

I know this port just releasing is a labor of love from Zeboyd Games but I wish it had a bit more. A lot of my complaints could be addressed in a future (potential) Switch port. Having played Chrono Trigger on iOS a few years ago, I love the touch screen implementation. I was hoping I could use the touchscreen here to progress dialog or tap enemies. The lack of cross-save is also a tad disappointing.

If you’re a fan of 16-bit JRPGs, this is a no brainer. Don’t bother with some of the big publishers that try and sell you games like this: this release is all you need. Cosmic Star Heroine is a fantastic JRPG with a kickass soundtrack and a sublime combat system. It is also one of the rare JRPGs that doesn’t waste your time thanks to great pacing. I can’t wait to buy the physical release whenever it happens.