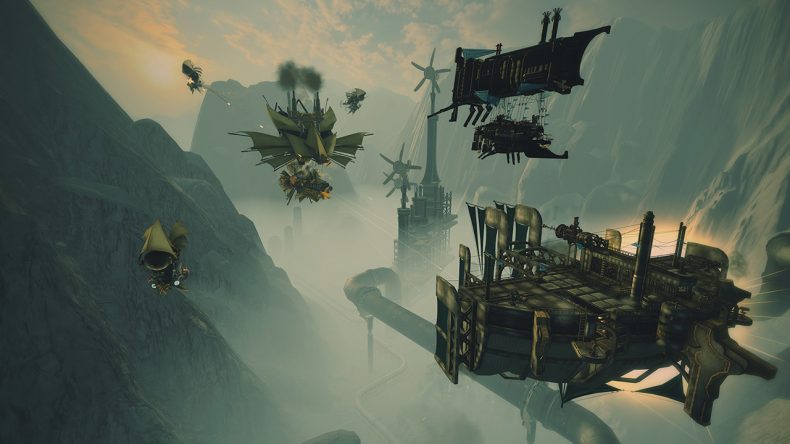 Heavily focused on teamwork, Guns of Icarus Alliance is equal parts exciting airship battles and confusing busywork. A fiddly communication system that is clearly designed with a keyboard in mind and an inconsistent voice communications channel means that, rather than deft airship battles, confusion tends to rule the skies. Now it’s made its way onto PS4, featuring the player-vs-player combat of Guns of Icarus Online, along with a player-versus-environment co-operative mode where six factions battle it out for dominance on an ever changing battle map.

You can play as three broad class types, each with their own set of skills and expertise that improve as you level up. You can take on the role of Pilot, Gunner or Engineer, the latter of which offers the least path of resistance for getting to grips with the basics of the game. To begin there are a couple of tutorial missions that take you through the various components of your airship: the balloon, engines, hull and guns. The first tutorial has you running around the ship repairing and putting out fires to understand the role of the Engineer, the second one teaches you the differing gun and ammo types and when best to use them, and the final one takes you through the basics of flying your aircraft. After these are finished you are free to jump into either a PvE or PvP match.

Teamwork makes the dreamwork in Guns of Icarus Alliance. Without a crew, each with their own specific tasks, your life span in the skies will be limited. Crews are made up of four players, if there aren’t enough live players around, the AI will backfill. There is also PC cross play so the likelihood will be that your team is made up of veteran PC players and PS4 newbies, so be prepared to be screamed at through the voice and chat channels from impatient and intolerant players not willing to take the time to explain what the game utterly fails to do. Persistence wins out though; if you are in for the long haul and can soldier your way through the first five or six matches, things do start to become clearer. Engineers are literally the life blood of the crew, and choosing that class first will have you running around the ship repairing and putting out fires. Ship knowledge is a must, and in the early days this is compounded by a vast array of different hull configurations that can be chosen. Gun emplacement, helm location as well as engines, hull and balloon placements differ vastly across the different ship loadouts so it is worthwhile spending a few precious minutes at the beginning of each map orientating yourself. Much of your work, however, will be reduced if the helm is in the hands of a skilful pilot, and an accurate and knowledgeable gunner mans the arsenal, as enemy ships are out-manoeuvred and brought down quickly.

After each match you are rewarded with XP and gold coins which can be spent on the battle map. This is a strategic world map which shows the areas of defence and attack for your particular faction. Your actions in matches can impact this battle map as can spending your coins on increasing fortification or war effort, by doing so you will get a temporary boost to certain abilities that can turn the tide of matches played by yourself and your fellow faction members. This ‘total war’ idea, adds an element of you playing a small part in a much larger conflict, something that is further built upon with the faction leaderboards. Performing consistently and well will raise your standing in your faction, so that at some point you may even become one of the leaders of that faction, with all the plaudits that may bring. This internal meta game is quite compelling and is an interesting way of obtaining buy in on the actions you perform within the game. Guns of Icarus Alliance clearly has its roots on PC with an interface that screams of keyboard and mouse inputs, but Muse Games has done some good work in translating that onto a controller. It is a shame, then, that some of the inputs are buried somewhere in the interface, I still don’t know how to ready up for a match, and using voice communications in game is tied to a button input meaning that once battle becomes really hectic it is easy to forget and you end up making call outs to the ether. A similar layer of obscurity continues with so many notifications of in game objectives and chat communications flying around that I have finished numerous matches not having a clue what just happened, other than we won or lost – the how or why are not clear. Cross-play also works very well, but I experienced some significant slowdown in some games where there was a lot going on on screen which is obviously disappointing.

There is fun to be had, matches are frantic and have a sense of scale to them, the different ship types and loadouts create interesting layers of depth to each match, and the war map helps build a sense that you are part of a much grander scheme. Visually, the Steampunk aesthetic adds an element of coolness to everything. Airships, lets be honest, are marvellous, yet utterly ridiculous things, but seeing an armada of floating ships is quite the sight. There are some early game annoyances with a steep learning curve, compounded by the lack of meaningful explanations for what everything is, which could put some players off. But like with most things, persistence pays off, and as your skills and knowledge grow, so does your enjoyment.

Guns of Icarus Alliance brings a cool Steampunk vibe to a flying armada of ships, but a steep learning curve, and a lack of meaningful explanations of systems means the fun takes a while to come through.