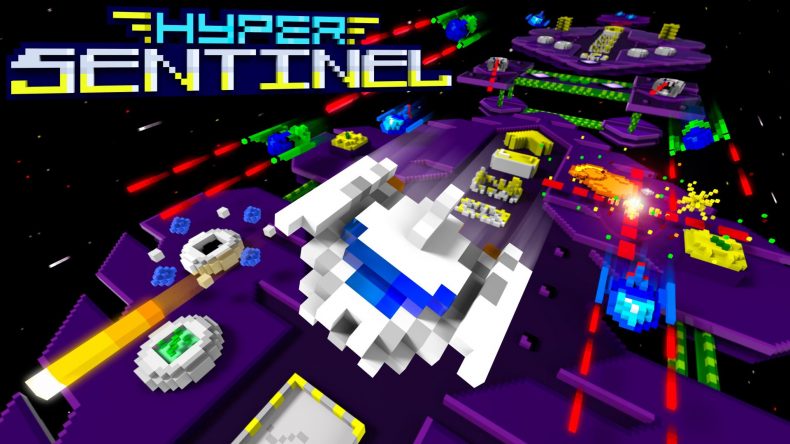 Gamers of a certain vintage, those of us who walked hand in hand with the dinosaurs, will well remember the games of Hewson Consultants. Founded by Andrew Hewson in the mid-eighties, the small software studio pumped out some of the more exciting and enduring shoot ‘em ups of that era, games such as Paradroid, Cybernoid and, Hyper Sentinel’s main influence, Uridium. These were mercilessly tough, hectic shooters, fine-tuned to match the coin-coaxing difficulty of arcade cabinet hits of the time.

Fast forward to 2018 and Hewson Consultants are back in the form of Huey games, whose CEO and creative director is Rob, son of Andrew, Hewson, here producing this “neo retro” effort developed by Jonathan Port. Successfully kickstarted into life by an ever-enthusiastic retro gaming community, Hyper Sentinel is a love letter to the heyday of Hewson and is, for all intents and purposes, Uridium revived for a new generation. Anyone who played Uridium, and somehow still has a fully functioning memory, will instantly recognise the gameplay here as you guide your Sentinel class fighter back and forth above enemy dreadnaughts, taking out a set number of stationary ground targets whilst dealing with random formations of airborne enemy fighters. As you traverse the screen, left to right and back again, you’ll grab a number of score multipliers, health recharges and power-ups, including the superb Astro Mace, which consists of three balls on a chain that dangle from your ship, reacting realistically to physics as you boost through enemy formations. There’s also a buddy drone who provides temporary rear support, a devastating twin laserbeam that makes short work of incoming hostiles and a smart bomb that flattens every airborne enemy on your screen in a satisfying burst of colour and jagged lines reminiscent of a good old C64 loading screen.

Once you’ve destroyed enough ground targets, instead of landing on the dreadnaught and engaging in a hacking game (as was the case in Uridium) you now face off against a variety of bosses with alarmingly 1980s names such as Pytharg, who I’m sure was a girl I fancied at school back in the day. These boss encounters range from formations of ultra-fast enemy fighters who zip around just out of your reach, to large, multi-part, destructible behemoths who lumber back and forth across the screen until you deal them enough damage. Another new wrinkle added to the classic Uridium gameplay is that flipping your ship to change direction now activates a split-second shield giving you just enough invulnerability to pass through an enemy craft or bullet. It’s a nice addition that adds a much-needed layer of tactics and flair to proceedings, it also makes taking down larger enemy turrets a much quicker affair than having to back and forth on strafing runs, allowing you to repeatedly turn back on airborne enemy units in a more aggressive fashion, hounding them at close range with impunity if your directional flips are timed properly.

Hyper Sentinel’s moment to moment gameplay is nice and hectic, especially on the savagely tough retro difficulty, the controls are intuitive enough that it works well as something to pick up and play and the overall package is bolstered by the addition of more modern features such as boss rush and survival modes, online leaderboards and some sixty medals to earn for various feats during battle.

The main problem in pure gameplay terms here, however, is that it suffers from a fault inherited from its inspiration, there’s no getting away from the fact that the levels are, to say the least, samey, something that was perhaps understandable due to tech limitations back in 1986, but stands out more today. Besides the end of stage boss battles, things play out in pretty much the same way in each level, traversing back and forth blasting targets with only slight variations in enemy type and a different colour of dreadnaught to fly over. That’s not to say Hyper Sentinel isn’t worthy of your time though, what’s here is more than enough to justify the budget price and it perfectly suits the portability of the Switch, this is fast and frantic old school arcade action to dip into at your leisure, obviously sure to appeal more to old dogs who were there first time around but also with enough going for it that newcomers to this style of shooter will be more than entertained.

The soundtrack provided by Rob Fenn is a glorious homage to chiptune music with all the bleeps, bloops and roughly synthesised voices you remember from ye olden days present and correct and to sweeten the nostalgia factor even further there are also a handful of delightful retro screen modes to select from, allowing you to play the game with a CRT, Spectrum or C64 filter.

Hyper Sentinel is a pretty straightforward modernising of a fondly remembered 1980s shoot ‘em up that successfully adds a handful of modern bells, whistles and gameplay wrinkles to proceedings whilst also suffering somewhat from the inherent gameplay restrictions of its source material. Fans of retro shooters should be more than happy with what’s on offer here.

A bit too samey
Niche appeal

A pretty straightforward modernising of a fondly remembered 1980s shoot ‘em up that successfully adds a handful of modern bells, whistles and gameplay wrinkles to proceedings whilst also suffering somewhat from the inherent gameplay restrictions of its source material.

Hyper sentinel has just been announced for Nintendo Switch