At this point, with gaming audio having gone so far and mattered so much, everyone will have a favourite kind of headset, or headphones. I am partial to the Apple Airpods for music and podcast listening, because they fit nicely and sound good (don’t listen to the haters, they’re decent earbuds, stems or no). But there’s always room in my life for a proper headset like the Sennheiser EPOS GSP 602.

When it comes to a full on headset, I have a few criteria that a set needs to meet before I can give it my endorsement, and then a few other caveats that are specific to my home office setup which I mention because they may apply to you, or they may not, but either way they give a window into my mad setup.

First things first: comfort. I am getting on a bit now, and I don’t care how good a set of cans are if they don’t sit comfortably over my ears, and if they mash my glasses arms into my head and leave a mark. The GSP 602 just about fit the bill, here. This isn’t the most comfortable headset I’ve ever used, but I can happily wear it for two hours while recording a podcast without issue. I apparently have large ears, because while they do just about fit over my dumbo-styled features, they’re a little snug, in truth. For reference, the standard headset I’ve been using is the Plantronics RIG 500 which is a cheap and cheerful solution, but it has a comfy, lightweight feel, and has good bass for a lower-end pair of phones. 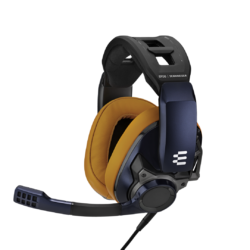 What I will say here is that I suspect the bulk of the GSP 602s is what causes some tightness when wearing glasses. And honestly, for the price, I would expect a higher tier of comfort. Rocking up at around the £199/$219 mark, I would consider them a competitor for the Turtle Beach Elite Pro models, which have less bulk and come with gel-cooled earpieces that don’t feel tight at all. It’s not a major complaint, but for the money, I was expecting something more comfortable.

They are very well made, mind you: I’d go so far as to say they are sturdy. A bulky plastic frame with a large microphone that isn’t detachable (sadly) from the headset itself, it connects via a 3.5mm cable which is split at the end into audio and mic components. The headset itself has adjustable sliders to create or remove tension, and the overall tension around the head does create a soundscape that means you might not hear people if they call you from a short distance away: these cans definitely help you get into the zone.

It’s a slightly barebones setup, though, in truth. There’s a large circular volume control on the right ear and the mic on the left, which has a nifty feature: lift it up to mute yourself. You can hear an audible click when the mic is engaged or muted, which maybe explains why it’s not removable, which does mean for those appearing on camera or using an alternative microphone, that it’s always going to be present on the headset.

The GSP 602 has great sound though, that’s for sure. This is Sennheiser we’re talking about, so it’s rather to be expected. There’s a high volume available if you want it, and I didn’t notice any distortion whatsoever on properly mixed audio. The bass is excellent, but even for general music listening this is an excellent sounding set of headphones, and in-game audio is always mixed well, even if some shooter-heavy games might end up rather bassy for their own good. What is a little disappointing is that the microphone sounds very much bog-standard. Due to the lack of low end on the mic, you’re going to sound pretty tinny, and although it’s pretty clear, I found the mic to be low-volume, as well, so I’d stick to playing games online or maybe taking phone calls with this set.

For the price, and with a name like Sennheiser attached to it, I have to be honest and say I was expecting a revolutionary bit of kit, and what you actually end up with is something that’s just decent. Personal preferences aside regarding how bulky it is, this feels very much a headset for people who, perhaps, don’t wear glasses, and want to sit on the sofa and chill with games, and at that, it’s very successful. The thing is, though, I couldn’t help but keep thinking about the Plantronics RIG that is around £130 cheaper than this model. The Sennheiser EPOS GSP 602 is a fine headset, but it feels a little like you’re paying for the name, and has a price-tag that’s a little hard to justify these days, in such a crowded market.