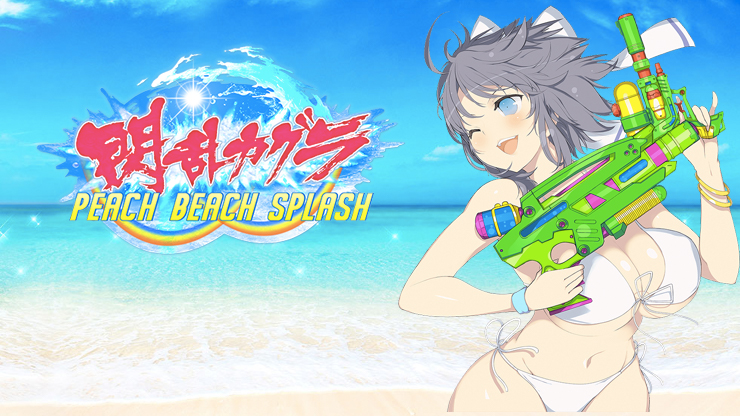 When I reviewed Senran Kagura Estival Versus, I had a great time playing a Senran Kagura game on both PS4 and Vita. The Vita version had some performance issues, but overall my experience was good across the board. I definitely wanted to see the franchise do something different, though. It feels like Koei Tecmo’s warriors games have had such a large impact that every franchise will eventually see a Warriors spinoff. Senran Kagura Peach Beach Splash is another spinoff game from Tamsoft and Marvelous, but it isn’t a warriors game. Kenichiro Takaki’s love for shooters is at the forefront here because Peach Beach Splash is a third person shooter in the Senran Kagura universe.

Peach Beach Splash or PBS is a water gun tournament that has all the ninjas you know and love participate to win a prize which will be anything they desire. Basically the plot just exists as an excuse to get the girls to participate and splash water all over the place and shoot each other with water guns. I’m not complaining, but that’s pretty much it. Everything leads to someone’s outfit taking damage and revealing more and more with loads of boobs across the board. When I first started playing the main story and just exploring what was on offer here, I was shocked at how much fun everything was. Now the Shinobi get teleported and have their bikinis on (and off sometimes) and their personalities are just as funny or terrible as they were in Estival Versus. Gameplay wise, there is a lot to take in. You have a main story mode that is full of dialogue before each actual mission, tournaments, and more. Multiplayer is available with free and ranked modes in addition to a co-op survival mode that you can play solo if you please as well. Unlike Splatoon 2, horde mode isn’t limited to some stupid restricted time slots here. While each mission has difficulty options, I’d recommend spending a bit of time in training and then going for the hardest difficulty directly. You earn better rewards and actually have a challenge. Gameplay is very interesting. Each weapon feels different and some of them let you rocket slide like it’s Vanquish. The only problem with the actual gunplay is the auto aim. It may make the experience too easy for some even though the aim is to avoid getting hit and shooting here. Missions usually involve taking out a few random grunts or sets of them, defeating a group of shinobi, or just random objectives like putting out a few fires while enemies attack. The finisher where you press Square near an enemy who is nearly out to get into an FPS mode where you shoot water at high speed on their boobs or ass is quite something. This results in the remainder of their attire breaking off. Yes, this is a thing that is possible in Peach Beach Splash.

In addition to weapons, there’s a loadout system with cards. Cards are earned through completing missions and are of multiple types. Some give you buffs or heal you while others summon companions during missions. I was quite impressed with the loadout system here because they did a fantastic job with the character art on cards. Every shinobi card is worthy of being in a full fledged game artbook. Ammo is water here and different weapons and boosts or water jetpack jumping will all consume your tank. Learning how to manage water while keeping your card cooldowns in check and eventually trying to splash your enemies is a lot of fun. The Dressing room mode is on a whole other level with the gloves (yes those ones) for using your hands make a return there. This is the first Senran Kagura game to be PS4 only. It also isn’t a remaster or a remake. I’m quite disappointed with both the performance and some of the visuals. Environments still look bland and a lot of the enemies look bad. The girls themselves and all the CG illustrations look amazing. I expected better for a game built for PS4 and not one that was cross platform with Vita. Performance is erratic. It hovers in between 30 and 60fps on my base PS4 without the option to lock it at 30. I prefer a locked 30 to variable frame rate for shooters and this one is quite fast paced. Maybe the next game they do for PS4 will have them actually get it running well instead of Peach Beach Splash where the visuals definitely warrant a locked 60.

Aside from the fanservice which is basically why you would buy this, voice acting and music are just as good. The voice acting is all in Japanese and at this point I can’t even imagine an English dubbed Katsu. Marvelous did a (wait for it) marvelous job with the localization and that resulted in me taking more than 600 screenshots.

If you’re a fan of Senran Kagura games, you probably are already getting this. If you’ve wanted to get into the franchise, I would get the game that has the gameplay you want to experience. Peach Beach Splash is a blast to play and I see myself coming back to it to unlock more stuff multiple times in the future. It is a great game to revisit for a mission or two. I just wish it ran better.

Senran Kagura Peach Beach Splash has exceeded all my expectations and is my favourite Senran Kagura game by far.

You may also like
senran kagura: peach beach splash