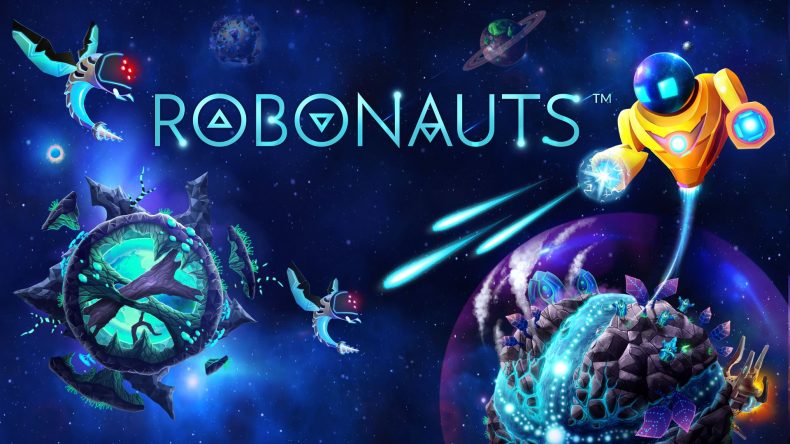 We’ve all wanted to be someone different at some point. When I was little I went through the customary deliberations as to whether I wanted to be a policeman, fireman, or a superhero (spoiler, I ended up being none of them). In Robonauts a small janitorial robot has dreams of something bigger, and after climbing into a mech suit and pressing something he shouldn’t he’s jettisoned into space and crashes on an alien planet. An alien planet that just so happens to have a robo-suit that fits him and allows him to fire guns and throw bombs. Good for him.

After a brief dance around a planet killing all its indigenous life you’re ‘rescued’ by a gobbledygook-talking robot who decides to use you to fulfill the wishes of his company CORPO, as a result you’re now plunged onto a series of planets and forced to accomplish tasks before you’re allowed to leave. Basically, your job is to act as cleanup for this company, and it’s every bit as chore-like as it sounds.

You move left to right, jumping over obstacles and shooting whatever happens to get in your way. At times you’ll need to kill everything, or you might need to defend CORPO’s mining equipment from attack, you might even have to destroy eggs, otherwise enemies will continue to spawn, although, what difference these eggs make I don’t know, as enemies repeatedly spawn via some sort of pod drop constantly during a level, and you’re regularly asked to kill a certain amount of them with no indicator as to how many you need to take out. Robonaut’s hook is that each level is made up of several planets, each of which has their own gravitational field, when you’re in the right spot you can use the “X” button to hop over, the animation as the whole places turns over is a bit disorienting to say the least. Your shots and grenades can also be affected by gravity as well, with bullets following the planet’s curvature, and bombs able to be thrown from one planet to another. Your shots home in to an extent as well, with your robot auto-targeting enemies for his guns and throwing bombs at an arc to hit whatever he’s aiming at.

While it’s been implemented to make things easier in the heat of the moment, the auto-targeting is more often than not a hindrance. Regularly you’ll find your target switched to another enemy just before you were about to kill the prior one, and there doesn’t seem to be a consistent logic to it, enemies right next to you can wind up ignored for one a good few steps away. Enemies can drop health, and also weapons; you can get grenades that freeze enemies, or ones that explode into many other one, guns that can fire singular powerful blasts or a spray of regular strength ones. These weapons have finite use though, and considering how small the UI is for your weapons and how much you’ll be firing these can be gone before you know it. On the flip side of this, it’s practically impossible to know what you’re getting, some weapons are considerably more use than others, but with the manic nature of the action you won’t really know what you’re getting until you pick it up, and a lot of the time it’ll wind up being something you didn’t want.

There’s stuff to like here though. The graphics are nice, bright and crisp, they’re as good in handheld mode as they are in TV mode, and the soundtrack from Simon Viklund is an energising 80s electro funk which is great for old gits like me. Co-op (local only unfortunately), can take away a lot of the chore-like nature as communication with a friend is much nicer than doing work alone. In solo play though, there’s only so long funky music can make pest extermination fun, the amount of times you’ll need to go to and fro, dealing with the spinning animation as you transition from one planet to another wears on you and frustration sets in when your shots start going wayward as the quantity of enemies goes up.

Robonauts starts promisingly but never really improves on that, the main shooting element is too haphazard to be satisfying and things devolve into tedium a little too quickly. The overall sum deserved better, but what’s here is middling at best.

Stellar soundtrack
It does look nice

Early on Robonauts is a nice little blaster, but a rote mission structure and a headache inducing core mechanic let it down.