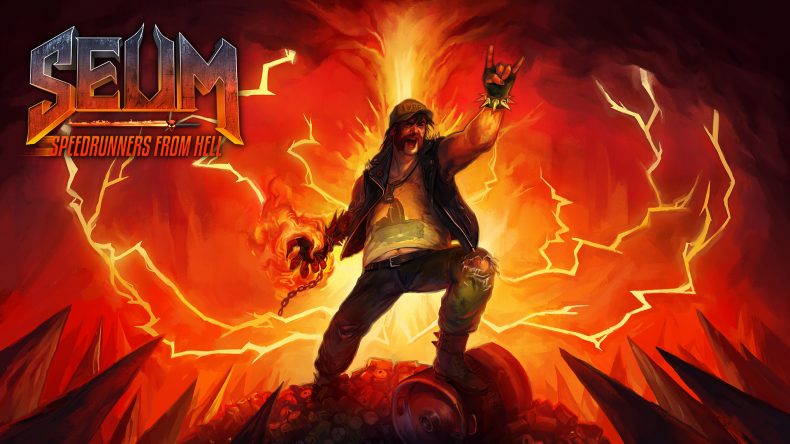 On paper SEUM: Speedrunners from Hell is as far as you can possibly get from “my thing”, and in reality that is perhaps the case. Having said that though, there is some satisfaction to be gleaned from running through a level hitting every target with pinpoint precision and frame perfect timing to achieve a good time, it’s just a shame that the repetitiveness and the floaty, imprecise controls start to grate after a while.

The game begins with a prologue to explain your actions, and is told through a series of static comic strips images. You are an unnamed protagonist, a trucker complete with ripped denim waistcoat and baseball hat, and you like nothing better than to settle down on an evening with a few tins of beer. One night, whilst settling down to listen to some metal music and booze yourself into oblivion the devil arrives to steal your beer. A fight ensues, you lose an arm and you somehow end up with the severed arm of the demon which you sew, Frankenstein style, onto your stump. Your task then is to descend into the pits of hell and recover your stolen beer utilising your speed and the powers of your acquired demonic arm, all whilst a repetitive metal track riffs and screeches in the background. You can guess from the title that SEUM is a speed runner. You must navigate each level to reach the end portal within a specific time, fail to do it quick enough and you will have to retry. Along the way you can collect one tin of your stolen beer. Each level is split by a floor with an elevator that takes you deeper and deeper into hell. Each floor has ten levels, nine basic ones and a boss level which is an amalgamation of all the skills you have learned through the preceding ones. In addition each floor has a bonus level that can only be unlocked upon collecting enough beer cans throughout the ten previous maps. The goal then is twofold: to reach the end point as quickly as you can; and along the way collect your stolen beer.

The levels are all fairly well balanced, gradually increasing the difficulty and introducing new mechanics that you activate with your stolen arm. Your powers range from launching a firebolt to activate gates or create platforms, to reversing gravity and teleportation. Each map has multiple ways to approach with different routes available to discover, the most straighforward one will get you to the end portal in time, but if you really want to get the shortest time possible and feature on the global leaderboard you will need to experiment. Thankfully, each one only takes a matter of seconds to get through and while death does come often as you learn each level there is a very generous quick restart option that allows you to begin again.

If the single player challenge isn’t enough for you, there is an endless mode and a speed run mode that unlocks after you have finished all one hundred levels, but honestly much of your time will be spent on trying to beat your time and feature on the leaderboard. On one level, at time of writing, I am currently the nineteenth fastest, but a full second behind the top player and it is this little meta game of pitching myself against other players where most of my enjoyment has come from. The satisfaction of timing a run to perfection is not to be understated. Aesthetically SEUM is reminiscent of DOOM and Quake, the latter of which I spent a fair amount of my youth on. For anyone familiar with these early games there is a certain element of muscle memory that kicks in with strafe jumping and timing your fire, however at times the controls feel a little flighty and the jumping isn’t as precise as it should be with often mistimed jumps or not jumping at all. For a game so reliant on accuracy and speed, the looseness of the controls feels like a major oversight and is my biggest criticism of the game overall.

SEUM: Speedrunners from Hell is a repetitive game, but one that has enough draw to it to give you that “just one more go” drive. It infuriates much more than it delights, but when it works well it is extremely satisfying. The Global leader board is always tantalisingly placed in the top left and replaying levels over and over to get that perfect run to beat your last time and perhaps feature in the top twenty players has kept me playing long after I would have given up in frustration.

When it works it's very satisfying
Lots of replayability

SEUM: Speedrunners from Hell is a repetitive game, but one that has enough draw to it to give you that “just one more go” drive.