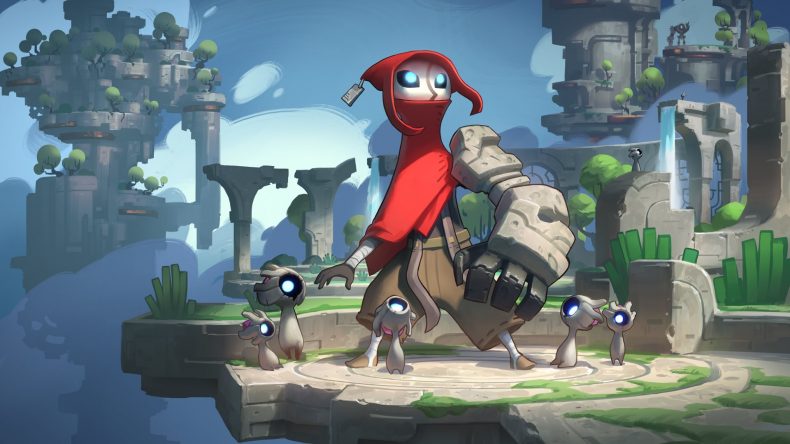 The Torchlight games are brilliant, aren’t they? They might well be labelled as Diablo clones, but in truth they became much more than that. They are some of the finest dungeon crawlers out there, as far as I’m concerned. So when Runic Games announced its latest game, Hob, a bit of a departure from Torchlight but still with a hint of that same action-adventure sense, my interest was piqued.

The game opens in darkness, suddenly pierced by light as the stone door to your chamber is pried open by a robot that reminded me a little of D0g from Half-Life 2, if he was designed by Team Ico. Sleepy and confused, your slender little chap (not a penis euphemism), masked and clad in a red cloak, emerges into a world straight from a fantasy novel. Greenery everywhere, old ruins and mysterious gates strewn about the place, and an assortment of alien wildlife bounding about in the tall grass. It’s a stunning opening.

There’s a real sense of wonder throughout Hob’s world, from the dreamlike landscapes to the fact that there is no comprehensible dialogue anywhere in the game’s story. Your mechanical friend utters strange, guttural phrases but only his gestures actually convey his meaning, often followed by a trip to the map screen and a new blip appearing somewhere in the distance. Something has corrupted the landscape; a purple goop covers large portions of each area and large, very lethal tentacles love nothing more than to murderise our poor little hero if he gets too close. Indeed, this corruption leads to him needing a… “helping hand” when his arm is severed in the game’s starting area. This helping hand comes in the form of a your robot ally’s own arm, which he willingly donates. It’s a gauntlet that can activate switches throughout the world, as well as unlock various extra abilities that can help traverse the world later on. You see, there’s a bit of Metroidvania about Hob, with its open world holding secrets that can only be accessed after finding the relevant ability. Its earliest feature is being able to punch through weakened walls and floors, which can also be used in combat to great effect. It’s sometimes necessary, in fact. Unlike Torchlight, Hob’s fights aren’t about stat-based hacking and slashing; it’s more a combination of Zelda and Dark Souls, especially with your invincibility frames during the roll animation. Enemies are quite varied in their appearance, despite there only being a handful of creature types, and each has their own patterns and strengths/weakness. At first, anyway. Later on, some appear freshly armoured or they’ll come in packs, but the latter can be used to your advantage. If one of the larger brutes swings at you, you can maneuver yourself so that a well-timed roll will see the weapon whiff over your head and poleaxe the monster behind you instead. I used that tactic a few times upon discovery, I don’t mind saying.

The real meat of the game is in the exploration and puzzles, however. Neither leave you wanting. The world is huge, with a scope similar to that of A Link to the Past, and although most of the dungeons are nowhere near as lengthy, they have some absolutely stunning design in them. The first time you see an entire level restructure itself before your eyes, without any technical trickery or cutaways, you cannot help but be left slack jawed. Puzzles aren’t necessarily difficult, but they can span entire zones and require a bit of logical thinking to solve them. Most are wonderfully designed, but the same cannot be said of the platforming controls that can potentially frustrate during a particularly precarious series of jumps. On a few occasions, the jumping and occasionally awkward camera would come together to cause a leap to be a pixel wide of the mark, and death would welcome our intrepid explorer with open arms. Luckily, this is rare enough not to ruin the otherwise great dungeons and the quick checkpoint return means you’ll never lose much time. A few of the dungeons unlock new abilities for your new arm and one or two are optional, offering up new power schematics that can be purchased in the game’s upgrade area. Using both hidden collectibles and green XP orbs dropped by defeated enemies, you can upgrade your sword and glove, to deal more damage and even turn your arm into a shield if you fancy it. There are other items dotted around the world that increase your maximum health and energy (needed to power your glove’s abilities) and I highly recommend seeking some of those out, to help with the inevitable hits you’ll take later on. The difficulty curve is pretty balanced, but one or two battles will certainly test you in the final third.

Hob really does excel in its worldbuilding and level design, its combat simple but deep, and always satisfying. The puzzles are fun and just challenging enough to feel rewarding, but never going far enough to feel harsh or cheap. The only way in which you might get stuck in the game, is when it sometimes struggles to offer decent direction to your next objective. This is at its most evident in a later section, when I suddenly found myself without an objective marker for the first time in the entire game, so I wandered the map and mopped up a few optional extras; one of which actually turned out to be entirely mandatory, as I discovered when it suddenly resumed giving me objectives markers. It probably added a good half hour onto my playtime, but at around 7 hours all in (including seeing both endings) Hob offers a decent amount of game for your money. It’s just a shame that it will likely be overlooked during this ridiculously busy time of year.

With great level design and a satisfying mixture of puzzles and combat, Hob is one of the most beautiful adventures in a while. From humble beginnings, its scope will often take your breath away.