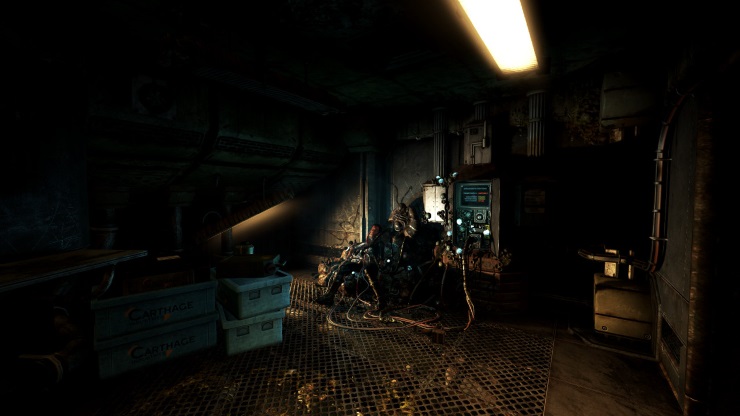 Being the follow-up to Frictional Games’ acclaimed Penumbra and Amnesia series, SOMA has some big boots to fill. Although the gameplay is much the same as its predecessors (Frictional is still sticking with the flight-over-fight style of previous titles), SOMA is a prime example that the studio still has plenty of surprises hidden up its sleeve, thanks to its original and somewhat emotionally investing story. Oh yeah, and it’s scary as hell.

Taking place in a research facility known as PATHOS-II at the bottom of the Pacific Ocean, you take control of Simon, a crew-mate who awakens with little recollection of how he got there. Guiding him through the various subsections of the facility, you slowly uncover the truth behind Simon’s existence as well as the terrible events that wiped the undersea establishment of human life. Aided by your AI companion Catherine, a wonderfully emotional story unfolds as the game progresses. I feel almost afraid to speak any details at all, in fear of ruining aspects of the story, but it is a narrative that will be better enjoyed by playing it with no prior information. With the finer details and true heart of the tale relayed through various conversations, recorded voice logs, emails and files, the story of SOMA is the pinnacle of its success. Despite taking a few hours to warm to the initial concept, by the end of the game I was in awe of the direction it had taken and felt emotionally invested in the future of the character I was controlling. Although there are a few moments where character reactions seem a bit naïve (Simon seems to think monsters are an everyday occurrence), the dialogue and development is well-paced and explored extensively in collectible files dotted throughout the game. While Amnesia and Penumbra both had intriguing stories, SOMA sets a whole new standard for the developer in terms of masterful storytelling.

Frictional have stuck with their now trademark style of gameplay, allowing you to click-and-drag almost everything you come into contact with. From opening drawers to unplugging sockets, this design choice still feels innovative and works wonderfully to create a fully interactive world. While there have been many imitators, none have perfected this mechanic of tangible reality as well as Frictional. The set and sound design of SOMA are essential in making the game what it is: terrifying. Many times I in fact looked over my shoulder while playing to check that there was no-one in my room with me, the sound design was that realistic. Frictional have built beautifully grotesque, fully explorable set pieces; gameplay is non-linear and you have the choice of a number of different routes through the game. While the routes do not vastly differ, it feels nice knowing you have a choice. Varying from overgrown laboratories to sprawling sub-floor plains, it is evident that a lot of time and effort has gone in to designing the SOMA’s world and it has greatly paid off. It feels fully immersive, and I cannot stress enough how much it felt like I was playing a VR game. If there are no plans to support virtual reality in the future, then Frictional should really consider it; the design was so overwhelmingly enveloping that I can’t help but feel it would be a runaway success as a VR title. The spectacular set pieces and goosebumps-inducing sound design help SOMA reel you in hook, line and sinker.

Enemies, while usually the same in previous titles, now vary greatly between the subsections of the facility. Their behavior remains roughly the same (slow, stalking, screaming at random interludes) but their appearance significantly differs. Each is as terrifying as the last, and my only complaint about the enemies is that there were not enough of them. This may just be a personal thing but encounters felt few and far between: nearer the end, the game felt more focused on story than scares. While I truly welcome this fact, I feel that Frictional could have taken it even further between story developments by adding more enemies into the mix. Unlike Amnesia, where enemies felt like a true threat everywhere you went, it was difficult to feel likewise in SOMA; getting the impression that you were being stalked from a distance rather than being hunted down by nightmarish beasts. While encounters were still nerve-wracking despite being easy to quickly escape, I can’t help but feel that a few more dotted here and there wouldn’t have harmed the formula.

My only major gripe with SOMA is the sometimes severe frame rate issues I encountered. While the game ran relatively smoothly most of the time, there were several sections that almost stuttered to a halt and numerous Quake-like loading screens that felt like they popped up everywhere. Outside the facility is where these frame rate crashes happened the most, and they stopped the game from feeling like a fluid experience. Despite an update slightly improving in the middle of my reviewing period, little was included to alleviate these issues. This problem may not be as bad on the PC version, but it was a noticeable flaw on PlayStation 4.

When it comes to horror, Frictional are your fellas. While they might have had a bit of a shaky response to A Machine for Pigs, they’ve found their way back and then some with SOMA. Despite being knocked slightly by some frame rate issues, a fascinating story forms the basis for its success with the scares taking more of a backseat this time around. Don’t get me wrong however, it is still intense, terrifying and quintessentially Frictional. Set in a spectacularly immersive setting and supported by masterful sound design, SOMA is solid evidence that the Swedes are still in total control when it comes to horror.

In a spectacularly immersive setting supported by masterful sound design, SOMA is solid evidence that Frictional Games are still in total control when it comes to horror.

New SOMA Story Trailer Premiered Ahead of Release Next Week