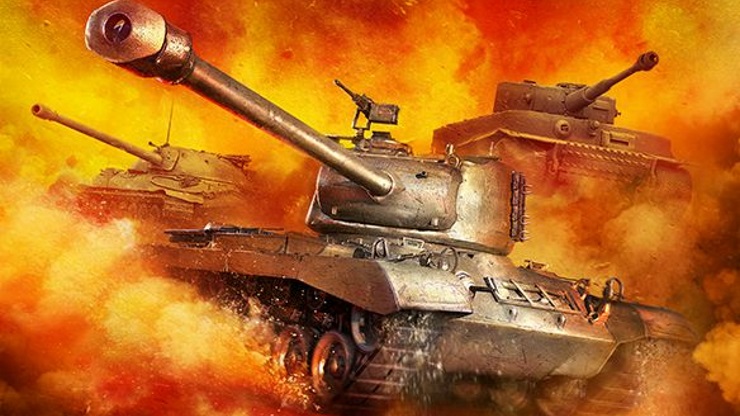 Back in secondary school my friends and I found English lessons quite boring, especially when our Scottish teacher would spend the entire hour-long lesson reading to us. So to pass the time we would play Bluetooth Tanks on our iPod Touches, disguising it by hiding the iPod behind the book. It was a simple game: from a top-down perspective you have to shoot your opponents with a tank (one shot, one kill), and there was the added challenge of not reacting to anything that happened on fear of being caught. It was great fun – the core of the game was so simple that it was impossible not to like, and was way more fun that Jane Eyre.

World of Tanks is at its core exactly the same game, but much more complex. The aim is still to destroy the enemy tanks, but instead of being a crude 2D affair this is a full 3D tank simulation, with incredibly real physics, damage systems and, perhaps most importantly, tanks. For some reason people seem to go crazy for that stuff, becoming excited over the smallest detail in a specific tank. For me, that was never the case, but what is extremely exciting is being one of the last remaining tanks in a battle, trying to hide and pick off the opponents. A typical match in World of Tanks consists of two teams fighting it out to either destroy all the opponents or to capture their base area. The latter objective is very rarely what ends the match, with people being more focused on kills than capturing the objective. Things tend to start out slowly, with both teams trying to gain a positional advantage to take the first blood. Then, once the teams spot each other, the all-out war commences, with shells flying everywhere until only a few players remain. If you manage to make it to the last few players in a match that is where things really ramp up – often you will be searching for the last couple of enemies, but always in fear of being caught out It creates a tension that, while unnerving, is strangely satisfying and enjoyable.

The map selection is one of the stars of the show, with tons of variation and very clever design. Many feature a lot of areas that can be used for cover, but you will never find an area that can only be attacked from one direction, meaning that no camping spot is safe. There is also a good amount of height variation, which is very important to take into account, as a tank can’t aim directly downwards very well.

One of the strangest design choices in World of Tanks is that once your tank is destroyed in a match you are free to leave, and head back into another match (with a different tank) while the previous game is still going on. This initially seems like a great idea, it stops you having your time wasted by watching a game if you die early on, but at the same time it means that nobody really cares about winning. Sure it’s great to win but if you don’t make it to the end of the match you’re not going to know or care what the result was. There are both positives and negatives to it, but a competitive online game where no one cares about wins is a bit strange. When out on the battlefield the controls are incredibly simple to pick up, using the analogue sticks for movement and aiming, and the triggers to shoot. Any other interactions are as simple as possible, which thankfully means that dodgy controls won’t ever be the reason you get blown to smithereens. That being said, the menu system is not the easiest to navigate, and some areas are more complicated than they need to be.

Another quite complicated area is the unlock system. The more matches you play, the more in-game currency you earn (there are a couple, one you unlock readily and another that is harder to earn or can be purchased), and the more currency you have, the more tanks you can unlock. While it sounds simple, it’s not quite that easy as the upgrade trees mean that you have to have a previous tank unlocked in order to grab the one you actually want. Then there are ones that you can straight-up buy with the premium currency whenever you want, but that isn’t exactly communicated well. The main annoyance here is that unlocking the higher tier tanks without premium currency is going to take a while. While they won’t always necessarily be the most fun, having them locked away for such a long time is sure to annoy some. Once you do start to unlock a few more tanks you will start to notice that they all feel unique. Light tanks obviously feel very different to the heavy tanks, while even tanks in the same class but from different nations have their key differences. Finding a selection of five or six tanks that you enjoy using and can use well is key to success, but fiddling around with some of the stranger options is always good fun. The variety on offer is certainly appreciated, and changing to a totally different type of tank after a crushing loss can get you back to winning ways. While the simulation side of things will never be something I will be overly interested in, I can appreciate just how well it is done. The tanks do look incredibly realistic and I genuinely believe they are as close to real life simulations as you can get.

World of Tanks is great fun to play, especially if you get to the end of a match with only a few players remaining on either side, but some questionable design choices outside of the actual gameplay let it down.

Questionable unlock system.
No real reason to care about wins.

World of Tanks is great fun to play, but a couple of questionable design choices stop it being amazing.