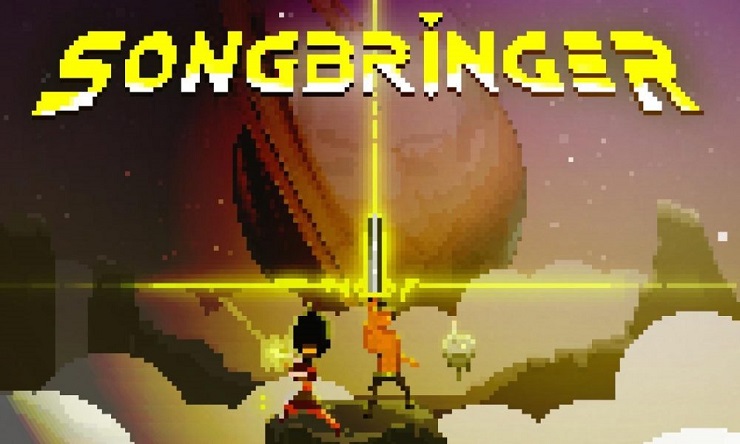 I’ve always been a lover of exploration, especially when it involves aliens and fantasy and stuff. Procedurally generated worlds are give and take at the best of times, and just because you’re treated to something different upon spawning doesn’t mean it’s enough to keep you engrossed in exploring it. Thankfully, the charm of Songbringer gives you plenty of reasons to play, try different worlds, and find the secrets that the world of Ekzera is filled with.

The basic story sees you play as Roq, a shirtless Rockstar that finds a powerful sword deep within a cave, only to awaken the mysterious evil that lives on the island. Right off the bat, Songbringer is hard. If you crave the punishing nature of games like The Binding of Isaac, this is right up your street. Whilst not quite to the same levels, it can push you to the limits, and the many boss fights will either make you or break you. One of my problems with the boss fights (despite their fantastic design and diversity in attacks) is the absence of a health bar or indication of how much damage you’re causing, especially when you’ve been battling one for a good ten-minute stretch only to die not knowing if you were close or not. Whenever you start a new game, there will always be a different world to explore. Being a pixelated world, it’s surprising how much the world changes. You may encounter a side quest that you haven’t before, such as bringing alcohol to a random soldier in exchange for info on the Great War of Ekzera, or there will be a dungeon you’ll find that has plenty of new challenges – not just via puzzles to solve, but with enemies to conquer.

The aesthetic here makes the world feel magical – like you’ve been there before, whilst at the same time encouraging you to look around and see what else is lurking there. There are sandy areas with mystical monuments, murky swamps, and evergreen forests, and they look lush despite the visual limitations pixelated graphics can bring. Saying that, worlds can spawn that feel visually similar to the last, but I believe that’s just down to the nature of procedural generation. Enemy design is also wonderful, with lots of different threats to try and kill.

Green horizontal worms, laser bullet-firing porcupines, goat-masked men, grim reapers, dagger-wielding lizards, and multicolored orbs are just some of the things you’ll have to change tactics for in order to kill. Your main weapon is the Nanosword – the one you find right at the start. It’s effective against a few enemies, but can be awkward when fighting hordes. If you don’t strike at the absolute perfect moment, you’ll take damage, and your courage (health) will deplete. It’s a pain when entering rooms filled with a lot of things to kill and it’s my biggest issue with the game. Luckily, you’ve got bombs that you can leave around that’ll detonate after a few seconds, and a top hat that acts as a boomerang with pain-inflicting abilities, along with other weapons. There’s also cacti you collect that gives you temporary invincibility and extra courage, as well as other benefits. You can buy other items in shops, such as Bio Detectors to help locate lifeforms in the world, but the real fun comes in finding lots of different things within the world, whether on the surface or in the depths of the game’s dungeons. These dungeons are layered, and you can sink deeper into the world by travelling through different doorways and uncovering new enemies. By collecting keycards, you can open locked doors, with the overall goal being to find the boss and slay it. The dungeons are cool but brutal, and can test your patience if you’re not used to this kind of punishing gameplay. I lost my cool many times, but I persevered again and again (only to get my arse kicked relentlessly).

Songbringer is a cool action RPG, and there’re lots of nice touches that give you a sense of Déjà vu as you play. Jib, your trusty robot will scan for life and find items within the world, such as money and courage, and if you want to play with a friend, he can be controlled through local co-op. Dungeons are very different from one another offering varying challenges, and it’ll appeal to you if you love to face brutality head on. There’s even a permadeath option if you’re that kind of crazy person, and leaderboards are available to let you compare times of completion and percentages of how much of the map/items you uncover. It’s fun, and you should certainly check it out if you’re a fan of the old school Zelda games of your childhood.

You'll enjoy exploring, and the bosses are tough nuts to crack, but frustrating controls and its dificulty may prove a little too much for some.