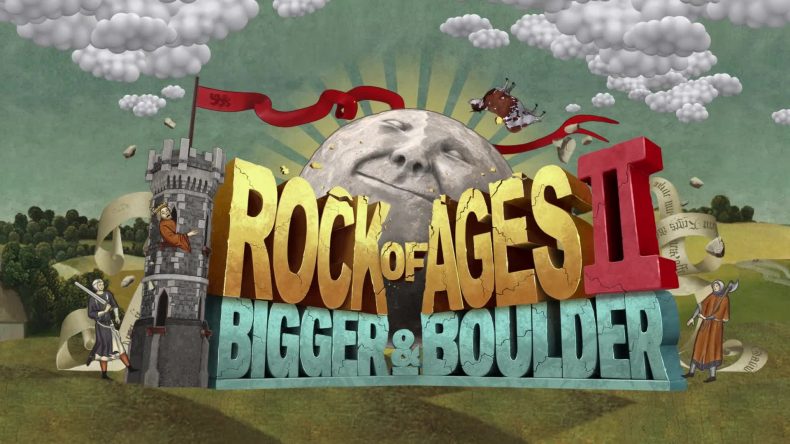 The goofy and often genuinely hilarious Rock of Ages returns with more of its curious blend of marble madness and tower defence strategy gameplay, an extended multiplayer element, and perhaps the worst Scottish accent ever heard in a video game.

The game begins with a story exposition explaining who you are and what you will be doing. This time though, rather than being Sisyphus, eternally charged with rolling a boulder up a hill, now you are Atlas who during a momentary loss of concentration drops the globe from his back and reaching down picks up a boulder instead. Now for some inexplicable reason he must battle various historical figures with huge boulders to batter down their stronghold doors and crush them.

Rock of Ages II is divided into offline and online content. Offline is where the single player story campaign is, as well as an obstacle course mode and a war mode which pits you against another player to be the first to break down the opponent’s stronghold as well a time trial mode. In offline mode these can be played with either the AI, or plug in another controller for some couch co-op. Online has the same modes (with exception of the story campaign), but you can face off against up to three other players. The story campaign sees you and your boulder travelling across a beautifully designed map of Europe and into North Africa to battle a variety of historical figures from the likes of Richard the Lionheart in England, to the seven foot tall Scotsman William Wallace (he with the aforementioned terrible accent) in Scotland, to the French heroine of the Hundred Years’ War, Joan of Arc. You even fight The Scream from Edvard Munch’s famous painting in Denmark.

To get to each battle you roll your boulder along set roads, collecting items along the way which will add new defensive units to your arsenal: things like walls to obstruct your enemy, or sticky cows that will slow down your opponent’s boulder, or huge catapults that will fire projectiles to damage your opponent as they thunder down towards your fortress. The further in the campaign you get, the more absurd the items become: huge wind turbines that positioned correctly will blow your opponent off track, or perhaps a giant elephant that will slowly lumber around the map getting in the way while the people on its back fire arrows to damage the boulder. It’s daft yet imaginative stuff. Each mission of the story starts the same, giving you a small window of time while your boulder is being constructed to set up your defences (the type of which you choose before the match starts). Initially you only have one boulder type to choose from, but as you progress you will unlock and find new boulders that all add different elements, for example, a balloon boulder is constructed faster, will allow you to jump higher, but does less damage when it finally hits the fortress, or a boulder covered in tar that packs a punch and will leave a sticky, tarry residue to slow down your opponent. Once your chosen boulder is constructed and you are happy with your first round of defences you can start your attack which is basically rolling the huge rock down increasingly complex courses, avoiding the enemy defences and clattering into the opponent’s fortress. The winner is the first one to break down the gate and roll over and crush the opponent with their boulder.

As you roll your boulder down the course you will accrue gold. You can increase the amount that you gather by smashing into various structures along the way causing as much devastation as you can, as well as mining it if the course has the option. You utilise the gold for defensive placement as each one you lay down on the course will have a cost associated with it. The more gold you gather, the more opportunity you will have to place defences and more expensive and therefore effective ones down to thwart your opponent.

By completing a mission you will be rewarded with a star, and to progress further in the campaign you will need to accrue a certain number of stars to unlock new areas on the map so you will find yourself repeating courses many times to gather the stars required to progress, something that does start to get a little repetitive after a while. Visually, it’s astonishing to look at. The animation is the same surreal, Monthy Python-esque stuff from the previous game, with beautifully rendered backgrounds and recreations of the art style of the eras each “enemy” is from. It’s incredibly unique and genuinely very, very funny at times. Indeed the art-style and animation is far, far better than it has any right to be in such a simple game, it really is the stand-out element.

I like Rock of Ages II a lot. The quirky art style is wonderful and imaginative and there are genuine moments of hilarity while playing. The campaign does start to drag on after a while, with you finding yourself repeating courses to collect the required number of stars to unlock newer areas, and the multiplayer elements don’t really offer much in the way of variety of modes. But, it is a unique title, unlike anything else I have played in a long while, and fits very well into the space reserved for games that are great to dip into now and again.

Gets a bit repetitive
Multiplayer doesn't offer much variety of modes

A unique blend of marble madness and tower defence that does become repetitive after a while, but sits nicely in the spot reserved for games that are great to dip into now and again.