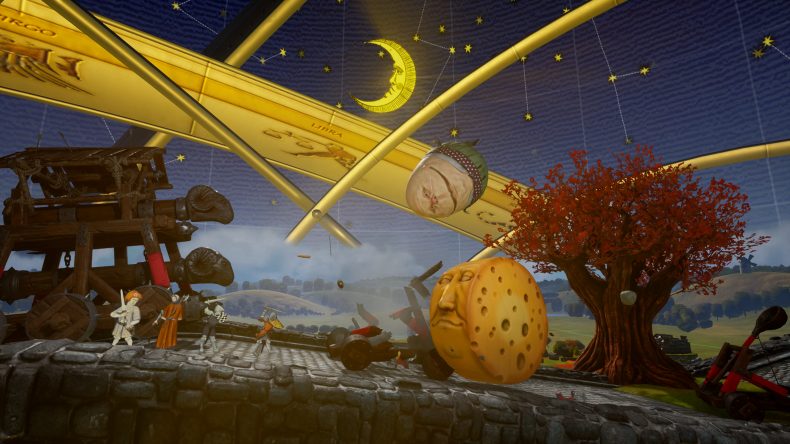 Like many people of my generation, I love a bit of Monty Python humour. From the Flying Circus sketch show to movie classics like Monty Python and the Holy Grail or Life of Brian, their ridiculous brand of surreal comedy just tickles my funny bone. Clearly, the developers behind Rock of Ages 3: Make & Break must share that love.

The crux of the game is to roll boulders of varying types down a veritable obstacle course of towers, trees and a weird assortment of units designed to slow or stop your assault altogether. At the bottom of each course is a door that needs smashing down, before you begin shattering and flattening the people and furniture contained within. Using historical and mythological characters, Rock of Ages 3 begins with greek warriors trapped in a cave with a blinded cyclops. How do our heroes escape? By waiting for the cyclops to fall asleep, then rolling bundles of sheep into the boulder blocking the cave’s entrance, of course! It’s all wonderfully ridiculous, with cutscenes filled with characters created to mimic that iconic Monty Python style, complete with muffled, incoherent nonsense spouting from their mouths.

As expected, your opponent is the one trying to smash down your door, and your task is to build defenses as best you can, to stop that from happening. This was the most difficult, and least fun, aspect of my time with Rock of Ages 3’s preview build. Not helped by a tutorial that explains only the bare minimum, and no real explanation of how your defensive units work. It’s a bit like Totally Accurate Battle Simulator, as you’re given spending limits and have to work out the best way to get the job done, only you’re doing it all in real-time here, building as the boulders make their inexorable journey to your front gate. Gold occasionally drops from the sky, replenishing a little of your reserves if you grab it in time, allowing you to build more defenses or replace those that are inevitably disintegrated. It’s just…a bit too harsh in its current form. This isn’t the whole game though, as you can also build your own maps for a variety of game modes. Again, the tutorial for the level editor is as useless as it is for the defence side of the main game, but a little trial and error had me moving terrain around in no time. My first creation was incredibly simplistic as I grappled with how the editor worked, but others had obviously been busy creating and uploading their maps, as I discovered when dipping into the online side of things.

This is where I think Rock of Ages 3 will really shine. Using its creation tools, players can essentially create an infinite number of levels for the game’s online modes. Even when confined to a simple target-smashing game, I was amazed at the level of creativity already on display. There are maps with multiple paths, each path representing a different level of navigation challenges, and some maps that are deceptively simple but no less fun because of that. At the end of these runs were skeeball-like scoreboards, with you having to align yourself on the final ramp in order to land in the hole with the highest score. For example, depending on the number of targets hit on the run down, landing in the 4 hole will quadruple the score and increase your chances of beating the opposing player/AI over several rounds.

It feels great to play too, as you roll and jump around each course. You’ll have to take into account your inertia as you try to make it round bends, sometimes having to sacrifice speed to make sure you aren’t flung off the edge. Or perhaps you fancy taking the risk of jumping the gap instead of trying for the corner, it’s up to you which route you take. Don’t think that it’s easy though, you’ll find yourself falling off the edges more often than you think, as you learn the controls and courses.

Rock of Ages 3: Make & Break has the potential to be hilarious fun, online and off, but it isn’t without a few flaws here and there. Still a couple of months for ACE Team and Giant Monkey Robot to round off the rough edges before rolling out the finished product on June 2nd.

MORE LIKE THIS
ACE Teamrock of ages 3Rock of Ages 3: Make & Break