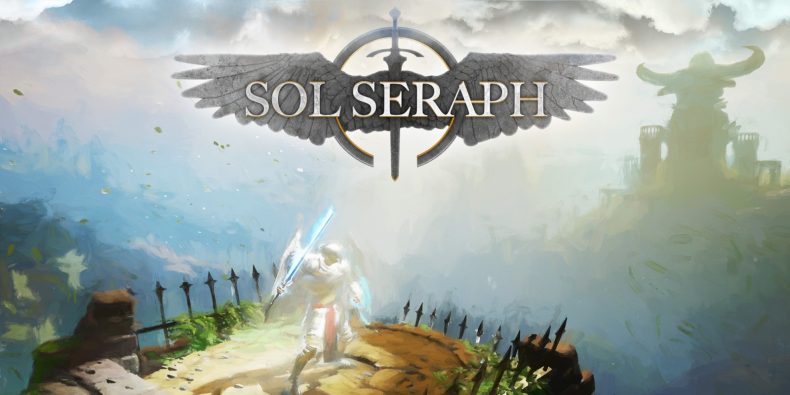 The title of SolSeraph gives away perhaps more than it first appears. At face value it does a good job of describing your character – you are literally the sun angel Helios, Knight of the Dawn, tasked with taking down the Younger Gods and removing the world of Chaos. But, as well as that, the choice to coalesce two words into a singular word title, mirrors the amalgamation of two distinct genres, as SolSeraph swaps from top-down strategic town defending, to a side-scrolling hack ’n’ slash platformer at various points.

If that sounds strangely familiar, it’s because there’s more than a whiff here of Enix’s ActRaiser back on the SNES, with the same flip between genres and even an angel as the main protagonist. So how does a spiritual successor to a game nearly three decades old stack up these days? To answer that, let’s take each genre separately, beginning with the town management. Here you must build a developing settlement that not only thrives but can protect itself from the relentless assault of monsters attacking your town centre. So alongside housing and resource production, you’ll need plenty of defences to tackle the roaming hordes. Most of your time will be spent balancing the few levers at your disposal in terms of people, food, and wood to construct and staff your defensive buildings. Then as your foes descend in waves, on pre-set paths, you can watch on to see if your strategy has worked. It’s not completely passive, as you can cast miracles, which can help in the heat of battle either by damaging enemies or calling on a spirit to join the fight. If five enemies reach your centre in any wave, you lose, and you can retry from the beginning of the round.

Sadly, this genre is by far the weakest of the two. And that’s even if I get over the fact that despite people being adept at chopping down trees, and miracles being cast left, right and centre, no one seems to want to plant any news trees, meaning your wood resource is finite. It grated at my core of town strategy simulators where your first port of call is always a decent wood supply. But I get it, the wood needs to be finite to stop you filling the map with endless defensive towers, and making the challenge trivial. Instead, the real reason why this part is weaker is that it’s simply quite dull, due to some design decisions that once realised, make it a very simple, flat, almost time-wasting experience. Progression comes by expanding your town and accumulating Spirit from fallen enemies. Collect 15 Spirit, and expand your town far enough and you can lay down a Temple building next to an enemy lair. This then disperses the fog around it and allows you to enter it and destroy the enemies within. The first wave of enemies won’t see you accumulate the 15 Spirit you need, so you must survive multiple waves of foes. But progressive waves become larger and stronger, meaning each successfully defended wave provides plenty of Spirit, making the 15 Spirit cap for Temples almost arbitrary. The difficulty is expanding your town so you can build them close enough to enemy lairs to dispel the fog. Except SolSeraph does away with this challenge too by introducing a Path feature that allows you to extend your village wherever you like at no cost. So after a few waves, you find yourself just building paths and temples around the map, and rushing to attack the enemy lairs. And the survival of your town becomes secondary, which is an incredible statement for a genre built on that idea.

Thankfully the hack ‘n’ slash parts are much, much stronger, and are accessed by attacking enemy lairs. Here you control Helios himself, armed with a sword that swings in the direction you’re facing, which can also be charged up for a more powerful jump attack. You also have a double-jump, a shield to block incoming projectiles and a dodge backwards move should you need some space. There’s also a mana meter, used to fire magical arrows as your projectile attack. As you progress, you’ll also unlock more uses for mana which can be toggled to at any point using the shoulder buttons. Each lair is a relatively contained affair, and the task is to kill everything in it. Thankfully there’s quite a decent variety of enemies on offer, with different beasts introduced over the six worlds on offer. Each of them requires different strategies to overcome, especially if you’re looking to avoid taking damage. It’s because of this that you’ll realise these sections should be taken a little slower than your gut tells you at first. A good hack ‘n’ slash has a decent tempo, and you want to force it that way, however, such a gung ho approach will often lead to you taking unnecessary damage. This is due to the well-designed mix of enemies, their placement, and the use of off-screen trickery to force you into harm. Arrows may fly from off-screen enemies, meaning a cautionary shield is always advisable, or spiders may descend from gaps in the ceiling, just where you want to jump to another platform. Being more reserved in your approach will reap more rewards and fewer deaths.

Each successful routing of a lair rewards Helios with an upgrade to either his health or mana level, which makes future encounters a little easier. When you’ve completed all the enemy lairs in a world, you can take on the Younger God of the area. This is a much larger area of enemies to overcome, before finally having to take on the boss themselves. Doing so gives a new mana ability but also frees the people of that area from their tyranny. You can technically take on any area at any point, and so if needed those extra life and mana boosts from completing lairs in one world can bolster you to return and take on a section in another world that was giving you trouble. I rarely found the need for this though, as whilst it can be a little challenging at times, it’s often just a case of assessing what you need to do and returning with the correct strategy. The one exception being the flying bird boss, that thing can do one, seriously. SolSeraph is pretty lovely to look at, especially in the 2D platforming sections, with some nice effects, and also a good use of background and foreground as enemies literally approach you from all sides. The soundtrack to these sections is also incredibly rousing and sets the tone perfectly for taking down all the enemies within. The combat feels responsive and fair, with perhaps the only downside being how long it can take to change left and right directions, to tackle enemies behind you, which would be useful when surrounded. There’s a loose story running through SolSeraph, with characters introduced from each of the worlds. But because they’re linked to worse half of the game, they become forgettable and merge into each other, apart from a couple of humourous individuals. It’s hardly surprising then, that you’ll want to rush to the combat parts as they just work so well, and are much more engaging and challenging to play.

So in some ways, SolSeraph is a great homage to the past, but in others, it does it a great disservice. Back in the days of ActRaiser, fans were disappointed to see the town management part cut from future releases, but sadly SolSeraph doesn’t do enough to argue the case for its return. Some of that is down to the decisions taken in its execution that make it feel passive and a little pointless at times, and some of it is down to just how enjoyable the hack ‘n’ slash sections are. I definitely enjoyed my time with it, and as a package, it is certainly recommended, but more so for those looking for a hack ‘n’ slash title, because those parts will be the bits you remember fondly when the credits roll.

SolSeraph is a very enjoyable, well-designed hack 'n' slash title, but the town management parts drag it down a little.