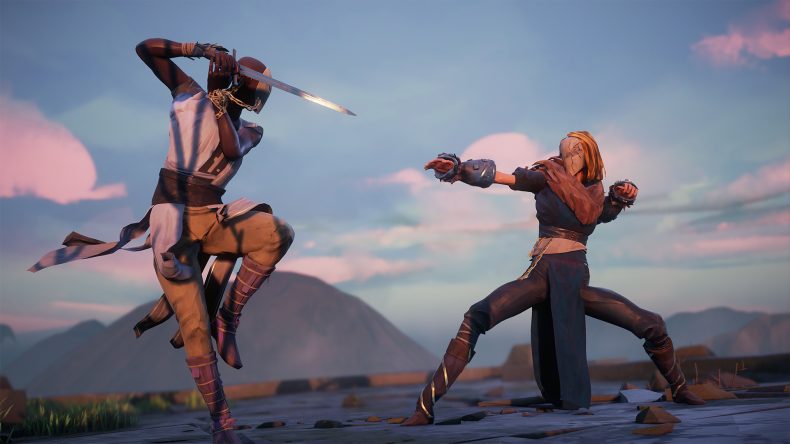 Dark Souls is a name that often comes up in today’s reviews. Difficult games are usually the ones compared to FromSoftware’s series, but not this time. One of the best things in the Souls series is its approach to multiplayer, specifically the way it blends seamlessly with the main adventure, and how it ties in so well with the deep combat system. It’s these two features that SloClap has latched onto with Absolver.

Set in a fantasy world in which martial arts are integral, you play A New Prospect, sent out into the world to defeat the Marked Ones. Once you’ve created your character using the basic creation tools (which amount to changing sex, skin/hair colour and hairstyle) you’re given your mask and sent out into the world. You always wear a mask in Absolver, hence there being no need for an in-depth character creator, and every NPC in the game wears their own.

The game itself boils down to two things: wandering freely around the world, and fighting its inhabitants. You can go anywhere from the start, aside from beyond the great door that requires the Marked Ones’ defeat to open. You’ll probably note very early on that the art direction is absolutely stunning. It has an almost low-poly look to it, mixed with texture work that makes it look like a watercolour painting, and it works perfectly. In the tutorial section, there’s a vista of the Plains of Adal that’s beautiful, even with its minimalist detail. It’s a colourful place to explore too, and locations blossom with hues of lush greens, yellows and reds, and even the darker zones don’t shy away from that broad palette, simply muting the tones to suit. The level of detail is wonderful as well, with flowers and long grass swaying in the breeze. Rivers and waterfalls flow gracefully through a world that just brims with mystery, never telling you how its harbour became so dilapidated or why there a ruins surrounding the Tower of Adal. You simply have to let your imagination fill in the gaps in Absolver’s threadbare story.

It’s not about the story, you see. It’s about the exploration of its small game world and it’s about the fight to survive (and potentially thrive) against the hostile people of Adal. They are all there for one of two reasons: to take on the champion Risryn and become an Absolver, or to stop you from doing it yourself. Actually, that’s not entirely true, as there are a couple of friendly NPC characters, though their input is fairly minimal. They’ll give you a couple of hints about the gameplay mechanics and offer the tiniest sliver of lore, but not much else.

Of course, not everyone you meet is AI controlled (unless you play in offline mode, obviously), thanks to the online integration. This is where Absolver has the potential to shine, once the game goes fully live. When a fellow player enters your current area you’ll receive a notification, and should you meet them it’s entirely up to you to decide how to proceed. You might simply offer a bow and pass them by; you might decide to offer them help in a particularly tough area, or with a Marked One; or if you’re feeling confident (or evil, depending on your mood) you might start a fight with them. Be wary of this, though, as they could be a much higher level than you, or just better at the game, and they’ll knock you into next week. I did find that it’s entirely possible that lag will severely impact the area if you’re unlucky enough. Unlike other games in which lag will have your opponent teleporting around like Nightcrawler from the X-Men, in Absolver it affects everything, including the NPCs. This caused the AI characters to teleport everywhere and attacks would connect at random, which caused quite a bit of frustration and, as you might have guessed, my untimely demise. Luckily, the only experience you lose upon death is from that specific, fatal bout. So when you do die (and you will, especially when the Marked Ones are involved) the losses aren’t catastrophic. Should you encounter any instability in the game as I did early on (the game crashed around four or five times during area transitions, but seemed to stabilise by itself a couple of hours into the game) this means that you won’t be losing much progress. The progression system in Absolver is really quite interesting, as you don’t just level up stats like you do in other RPGs, you actually learn new moves by sparring with other characters too. By blocking or dodging specific moves, or by utilising your chosen fighting style’s special ability, a gauge will appear to show you how close you are to learning how to perform those moves yourself. But only by defeating that opponent will you keep that experience. It really does add a unique dimension to the combat and experience systems.

The fighting itself is something that makes Absolver so special. When you start the game you choose from one of three styles, each with their own special ability and difficulty rating. The abilities are parrying, which stuns your opponent mid-move; evading, which allows you to contort your body around incoming attacks; and absorb, which neatly stuns your opponent very briefly and allows you to regain a portion of health by landing a few follow-up blows. Aside from this, you’ll have different starting move-sets that you can customise depending on which stance you’re using. You can transition between stances freely using the alternate attack button to chain moves together, or simply choose your own manually by moving the right stick in one of four directions. Creating your own combos is also necessary, by going into meditation (outside of combat) and switching your unlocked moves around. The more XP and moves you unlock, the longer the combos will become. This probably sounds much more complicated than it actually is, but it’s very easy to learn and the depth is staggering. When you actually get into a scrap, it’s always – and I do mean always – a tense affair. Some opponents will offer very little defence, but others will utilise their own special abilities to get around your block or simply to outmanoeuvre you before pummelling your face into mulch. You’ll often find yourself pacing around, sizing each other up before the battle begins, and you’ll be rewarded for creating the right move-sets for every situation. Being able to chain effectively between low and high kicks, or from light attacks to heavy ones is essential if you want to come out on top of each fight. When the odds are stacked against you and it’s three-on-one, quick thinking and effective stamina management will save your life. Or sometimes, just sometimes, you’ll knock one down because an enemy’s wayward kick hits their friend in the side of the head. There’s no Assassin’s Creed-style queuing up patiently to get into the fight, if they see an opportunity to strike then they’ll take it, regardless of whether you’re already dining on a knuckle sandwich at the time. You will eventually unlock defences against this kind of thing though, with moves like Shockwave and Earthquake unlocking as a result of beating the Marked Ones, so it does pay to take the risk when you meet them.

Without a doubt, though, the toughest fights in Absolver come in the form of the Combat Trials, in which you’ll face off against other players in set arenas. During the review period these fights weren’t easy to find, thanks to the low number of players, and as a result the matchmaking wasn’t exactly fair. I never once found an opponent less than double my level, and when they had more stamina and a far greater understanding of the movesets available to them, I didn’t stand a chance. You do still gain a progression star for losing, which allows you to level up in the trials (albeit at a slower pace) and unlock things like fighting defeated bosses again, with a higher level of difficulty, so it’s worth persevering.

Absolver isn’t a long game, with the main story clocking in at around five hours, but it has a touch of Destiny about it, in that it offers a gameplay loop that is rich in rewards despite being light on content. Almost all the post-completion content is based around the Combat Trials and online play though, like being allowed to join schools and learn more fighting styles and moves, or simply being able to fight bosses again, which does mean that solo play is a little stunted. You can still battle the Marked Ones again at any point by returning to their area of the world, only this time they won’t take it easy on you. You’ll also find that the game employs a kind of ‘New Game Plus’ to all the AI characters in the world, meaning you won’t be smashing your way through early game enemies without a care in the world. Just don’t get caught near a wall during a fight, or the camera will have all kinds of problems.

A few issues aside, I thoroughly enjoyed my time in Adal, even when I was getting beat around the head by multiple enemies. Or when I was beaten again and again by other players in Combat Trials. Or run through with a sword by a Marked One. Each and every fight I won, was earned through determination and patience, and every single one was as tense as anything I ever experience in the Dark Souls series. In fact, I don’t think any game outside of the traditional fighting genre, has ever got martial arts right until Absolver.

Combining unique and rewarding combat with the freedom to explore its beautiful areas in any order you see fit, Absolver is one of the best adventures of the year.